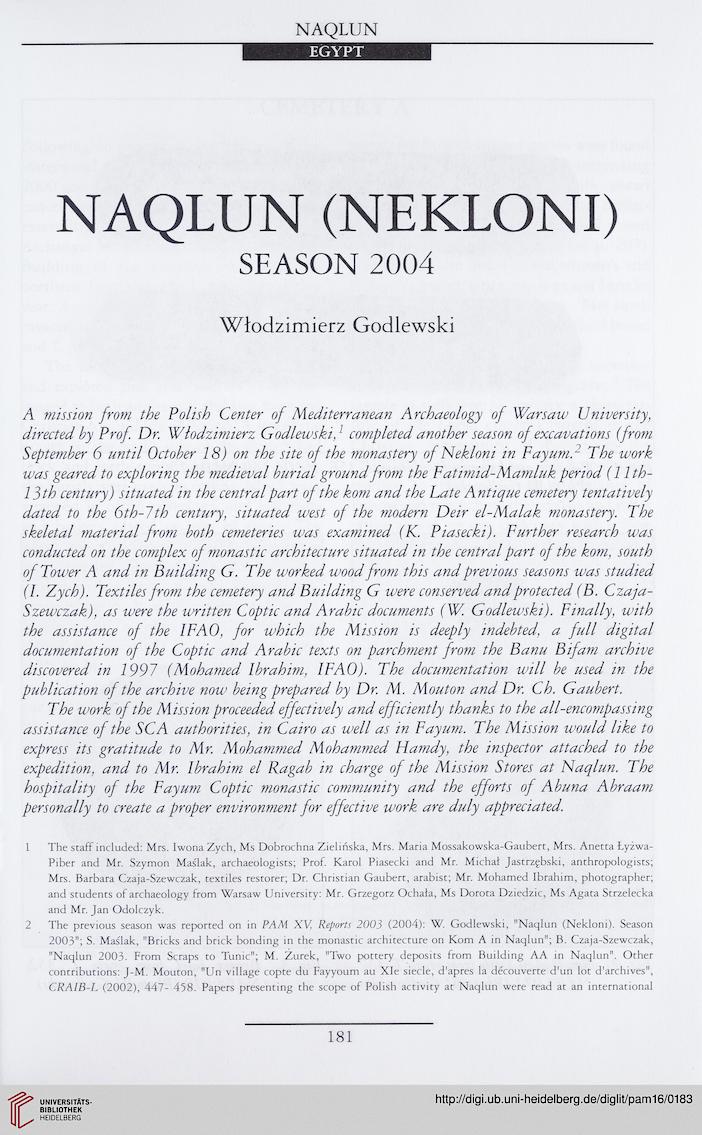 A mission from the Polish Center of Mediterranean Archaeology of Warsaw University,
directed hy Prof Dr. Wlodzimierz Godlewski,1 completed another season of excavations (from
September 6 until October 18) on the site of the monastery of Nekloni in Fayum.2 The work
was geared to exploring the medieval burial ground from the Fdtimid-Mamluk period (11th-
13 th century) situated in the central part of the kom and the Late Antique cemetery tentatively
dated to the 6th-7th century, situated west of the modern Deir el-Malak monastery. The
skeletal material from both cemeteries was examined (K. Piasecki). Further research was
conducted on the complex of monastic architecture situated in the central part of the kom, south
of Tower A and in Building G. The worked wood from this and previous seasons was studied
(I. Zych). Textiles from the cemetery and Building G were conserved and protected (B. Czaja-
Szewczak), as were the written Coptic and Arabic documents (W. Godlewski). Finally, with
the assistance of the IFAO, for which the Mission is deeply indebted, a full digital
documentation of the Coptic and Arabic texts on parchment from the Banu Bifam archive
discovered in 1997 (Mohamed Ibrahim, IFAO). The documentation will be used in the
publication of the archive now being prepared by Dr. M. Mouton and Dr. Ch. Gaubert.
The work of the Mission proceeded effectively and efficiently thanks to the all-encompassing
assistance of the SC A authorities, in Cairo as well as in Fayum. The Mission would like to
express its gratitude to Mr. Mohammed Mohammed Hamdy, the inspector attached to the
expedition, and to Mr. Ibrahim el Ragab in charge of the Mission Stores at Naqlun. The
hospitality of the Fayum Coptic monastic community and the efforts of Abuna Abraam
personally to create a proper environment for effective work are duly appreciated.
1 The staff included: Mrs. Iwona Zych, Ms Dobrochna Zielinska, Mrs. Maria Mossakowska-Gaubert, Mrs. Anetta Lyzwa-
Piber and Mr. Szymon Maslak, archaeologists; Prof. Karol Piasecki and Mr. Michal Jastrzgbski, anthropologists;
Mrs. Barbara Czaja-Szewczak, textiles restorer; Dr. Christian Gaubert, arabist; Mr. Mohamed Ibrahim, photographer;
and students of archaeology from Warsaw University: Mr. Grzegorz Ochala, Ms Dorota Dziedzic, Ms Agata Strzelecka
and Mr. Jan Odolczyk.
2 The previous season was reported on in PAM XV, Reports 2003 (2004): W. Godlewski, "Naqlun (Nekloni). Season
2003"; S. Maslak, "Bricks and brick bonding in the monastic architecture on Kom A in Naqlun"; B. Czaja-Szewczak,
"Naqlun 2003. From Scraps to Tunic"; M. Zurek, "Two pottery deposits from Building AA in Naqlun". Other
contributions: J-M. Mouton, "Un village copte du Fayyoum au Xle siecle, d'apres la decouverte d'un lot d'archives",
CRAIB-L (2002), 447- 458. Papers presenting the scope of Polish activity at Naqlun were read at an international