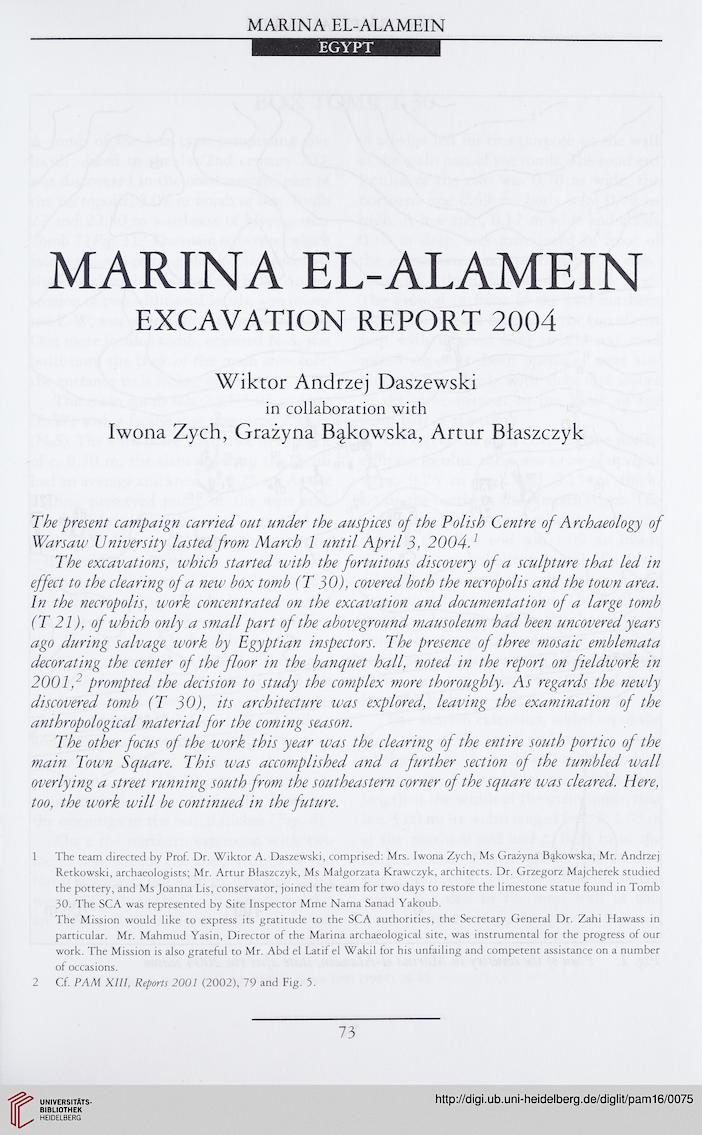 The present campaign carried out under the auspices of the Polish Centre of Archaeology of
Warsaw University lasted from March 1 until April 3, 2004.1
The excavations, which started with the fortuitous discovery of a sculpture that led in
effect to the clearing of a new box tomb (T 30), covered both the necropolis and the town area.
In the necropolis, work concentrated on the excavation and documentation of a large tomb
(T 21), of which only a small part of the aboveground mausoleum had been uncovered years
ago during salvage work by Egyptian inspectors. The presence of three mosaic emblemata
decorating the center of the floor in the banquet hall, noted in the report on fieldwork in
2001,2 prompted the decision to study the complex more thoroughly. As regards the newly
discovered tomb (T 30), its architecture was explored, leaving the examination of the
anthropological material for the coming season.
The other focus of the work this year was the clearing of the entire south portico of the
main Town Square. This ivas accomplished and a further section of the tumbled wall
overlying a street running south from the southeastern corner of the square was cleared. Here,
too, the work will be continued in the future.

1 The team directed by Prof. Dr. Wiktor A. Daszewski, comprised: Mrs. Iwona Zych, Ms Grazyna B^kowska, Mr. Andrzej
Retkowski, archaeologists; Mr. Artur Biaszczyk, Ms Matgorzata Krawczyk, architects. Dr. Grzegorz Majcherek studied
the pottery, and Ms Joanna Lis, conservator, joined the team for two days to restore the limestone statue found in Tomb
30. The SCA was represented by Site Inspector Mme Nama Sanad Yakoub.
The Mission would like to express its gratitude to the SCA authorities, the Secretary General Dr. Zahi Hawass in
particular. Mr. Mahmud Yasin, Director of the Marina archaeological site, was instrumental for the progress of our
work. The Mission is also grateful to Mr. Abd el Latif el Wakil for his unfailing and competent assistance on a number
of occasions.
2 Cf. PAM XIII, Reports 2001 (2002), 79 and Fig. 5.