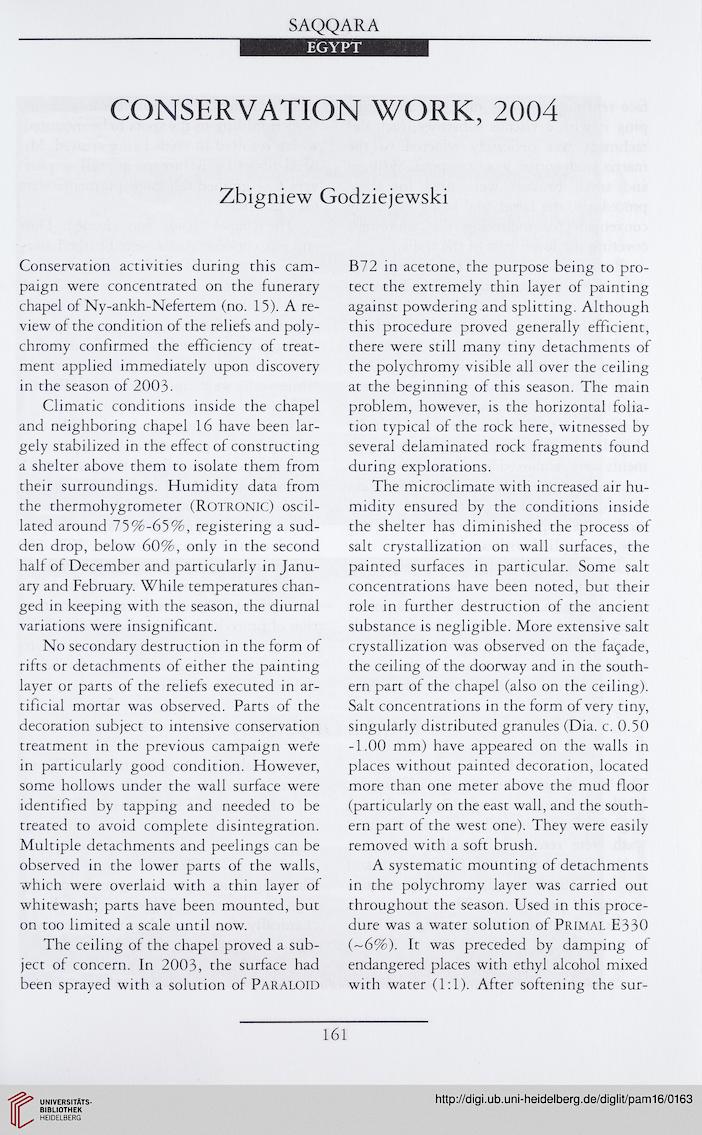 Conservation activities during this cam-
paign were concentrated on the funerary
chapel of Ny-ankh-Nefertem (no. 15). A re-
view of the condition of the reliefs and poly-
chromy confirmed the efficiency of treat-
ment applied immediately upon discovery
in the season of 2003.
Climatic conditions inside the chapel
and neighboring chapel 16 have been lar-
gely stabilized in the effect of constructing
a shelter above them to isolate them from
their surroundings. Humidity data from
the thermohygrometer (Rotronic) oscil-
lated around 75%-65%, registering a sud-
den drop, below 60%, only in the second
half of December and particularly in Janu-
ary and February. While temperatures chan-
ged in keeping with the season, the diurnal
variations were insignificant.
No secondary destruction in the form of
rifts or detachments of either the painting
layer or parts of the reliefs executed in ar-
tificial mortar was observed. Parts of the
decoration subject to intensive conservation
treatment in the previous campaign were
in particularly good condition. However,
some hollows under the wall surface were
identified by tapping and needed to be
treated to avoid complete disintegration.
Multiple detachments and peelings can be
observed in the lower parts of the walls,
which were overlaid with a thin layer of
whitewash; parts have been mounted, but
on too limited a scale until now.
The ceiling of the chapel proved a sub-
ject of concern. In 2003, the surface had
been sprayed with a solution of PARALOID

B72 in acetone, the purpose being to pro-
tect the extremely thin layer of painting
against powdering and splitting. Although
this procedure proved generally efficient,
there were still many tiny detachments of
the polychromy visible all over the ceiling
at the beginning of this season. The main
problem, however, is the horizontal folia-
tion typical of the rock here, witnessed by
several delaminated rock fragments found
during explorations.
The microclimate with increased air hu-
midity ensured by the conditions inside
the shelter has diminished the process of
salt crystallization on wall surfaces, the
painted surfaces in particular. Some salt
concentrations have been noted, but their
role in further destruction of the ancient
substance is negligible. More extensive salt
crystallization was observed on the facade,
the ceiling of the doorway and in the south-
ern part of the chapel (also on the ceiling).
Salt concentrations in the form of very tiny,
singularly distributed granules (Dia. c. 0.50
-1.00 mm) have appeared on the walls in
places without painted decoration, located
more than one meter above the mud floor
(particularly on the east wall, and the south-
ern part of the west one). They were easily
removed with a soft brush.
A systematic mounting of detachments
in the polychromy layer was carried out
throughout the season. Used in this proce-
dure was a water solution of Primal E330
(~6%). It was preceded by damping of
endangered places with ethyl alcohol mixed
with water (1:1). After softening the sur-