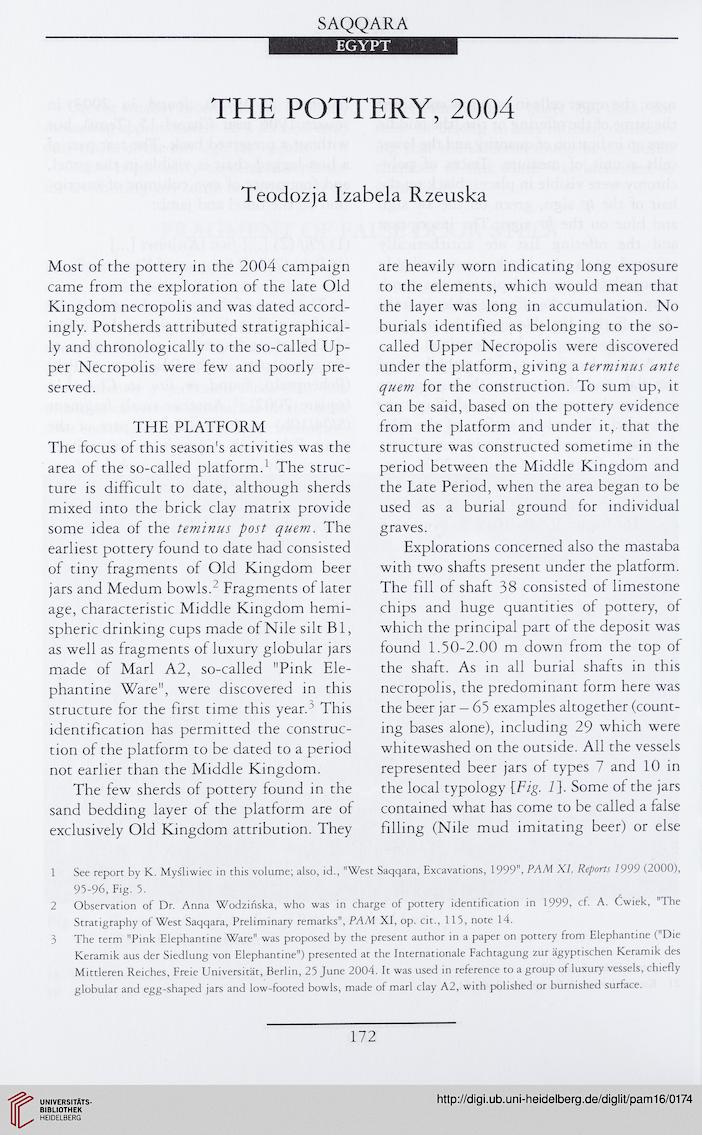 Most of the pottery in the 2004 campaign
came from the exploration of the late Old
Kingdom necropolis and was dated accord-
ingly. Potsherds attributed stratigraphical-
ly and chronologically to the so-called Up-
per Necropolis were few and poorly pre-
served.
THE PLATFORM
The focus of this season's activities was the
area of the so-called platform.1 The struc-
ture is difficult to date, although sherds
mixed into the brick clay matrix provide
some idea of the teminus post quem. The
earliest pottery found to date had consisted
of tiny fragments of Old Kingdom beer
jars and Medum bowls.2 3 Fragments of later
age, characteristic Middle Kingdom hemi-
spheric drinking cups made of Nile silt Bl,
as well as fragments of luxury globular jars
made of Marl A2, so-called "Pink Ele-
phantine Ware", were discovered in this
structure for the first time this year.1 This
identification has permitted the construc-
tion of the platform to be dated to a period
not earlier than the Middle Kingdom.
The few sherds of pottery found in the
sand bedding layer of the platform are of
exclusively Old Kingdom attribution. They

are heavily worn indicating long exposure
to the elements, which would mean that
the layer was long in accumulation. No
burials identified as belonging to the so-
called Upper Necropolis were discovered
under the platform, giving a terminus ante
quem for the construction. To sum up, it
can be said, based on the pottery evidence
from the platform and under it, that the
structure was constructed sometime in the
period between the Middle Kingdom and
the Late Period, when the area began to be
used as a burial ground for individual
graves.
Explorations concerned also the mastaba
with two shafts present under the platform.
The fill of shaft 38 consisted of limestone
chips and huge quantities of pottery, of
which the principal part of the deposit was
found 1.50-2.00 m down from the top of
the shaft. As in all burial shafts in this
necropolis, the predominant form here was
the beer jar — 65 examples altogether (count-
ing bases alone), including 29 which were
whitewashed on the outside. All the vessels
represented beer jars of types 7 and 10 in
the local typology [Fig. !]• Some of the jars
contained what has come to be called a false
filling (Nile mud imitating beer) or else

1 See report by K. Mysliwiec in this volume; also, id., "West Saqqara, Excavations, 1999", PAM XI, Reports 1999 (2000),
95-96, Fig. 5.
2 Observation of Dr. Anna Wodzinska, who was in charge of pottery identification in 1999, cf. A. Cwiek, "The
Stratigraphy of West Saqqara, Preliminary remarks", PAM XI, op. cit., 115, note 14.
3 The term "Pink Elephantine Ware" was proposed by the present author in a paper on pottery from Elephantine ("Die
Keramik aus der Siedlung von Elephantine") presented at the Internationale Fachtagung zur agyptischen Keramik des
Mittleren Reiches, Freie Universitat, Berlin, 25 June 2004. It was used in reference to a group of luxury vessels, chiefly
globular and egg-shaped jars and low-footed bowls, made of marl clay A2, with polished or burnished surface.