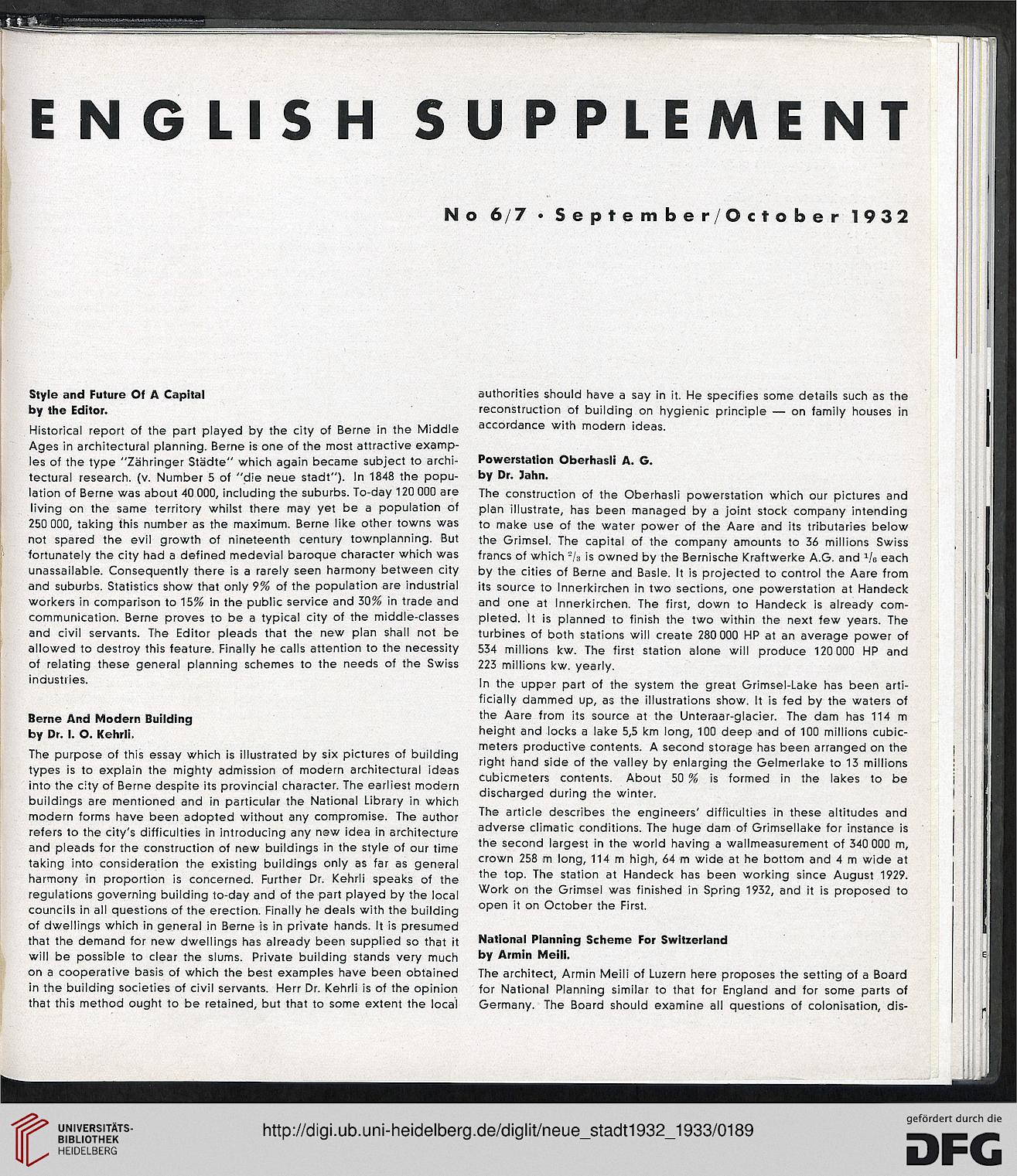 Style and Future Of A Capital
by the Editor.

Historical report of the part played by the city of Berne in the Middle
Ages in architectural planning. Berne is one of the most attractive examp-
les of the type "Zähringer Städte" which again became subject to archi-
tectural research. (v. Number 5 of "die neue Stadt"). In 1848 the popu-
lation of Berne was about 40 000, including the suburbs. To-day 120 000 are
living on the same territory whilst there may yet be a population of
250 000, taking this number as the maximum. Berne like other towns was
not spared the evil growth of nineteenth Century townplanning. But
fortunately the city had a defined medevial baroque character which was
unassailabie. Consequently there is a rarely seen harmony between city
and suburbs. Statistics show that only 9% of the population are industrial
workers in comparison to 15% in the public service and 30% in trade and
communication. Berne proves to be a typical city of the middle-classes
and civil servants. The Editor pleads that the new plan shall not be
allowed to destroy this feature. Finally he calls attention to the necessity
of relating these general planning schemes to the needs of the Swiss
industiies.

Berne And Modern Building
by Dr. I. O. Kehrli.

The purpose of this essay which is illustrated by six pictures of building
types is to explain the mighty admission of modern architectural ideas
into the city of Berne despite its provincial character. The earliest modern
buildings are mentioned and in particular the National Library in which
modern forms have been adopted without any compromise. The author
refers to the city's difficulties in introducing any new idea in architecture
and pleads for the construetion of new buildings in the style of our time
taking into consideration the existing buildings only as far as general
harmony in proportion is concerned. Further Dr. Kehrli speaks of the
regulations governing building to-day and of the part played by the local
Councils in all questions of the erection. Finally he deals with the building
of dwellings which in general in Berne is in private hands. It is presumed
that the demand for new dwellings has already been supplied so that it
will be possible to clear the slums. Private building Stands very much
on a cooperative basis of which the best examples have been obtained
in the building societies of civil servants. Herr Dr. Kehrli is of the opinion
that this method ought to be retained, but that to some extent the local

authorities should have a say in it. He speeifies some details such as the
reconstruetion of building on hygienic principle — on family houses in
aecordance with modern ideas.

The construetion of the Oberhasli powerstation which our pictures and
plan illustrate, has been managed by a joint stock Company intending
to make use of the water power of the Aare and its tributaries below
the Grimsel. The capital of the Company amounts to 36 millions Swiss
francs of which '/a is owned by the Bernische Kraftwerke A.G. and 1/o each
by the cities of Berne and Basle. It is projected to control the Aare from
its source to Innerkirchen in two sections, one powerstation at Handeck
and one at Innerkirchen. The first, down to Handeck is already com-
pleted. It is planned to finish the two within the next few years. The
turbines of both stations will create 280 000 HP at an average power of
534 millions kw. The first Station alone will produce 120 000 HP and
223 millions kw. yearly.

In the upper part of the System the great Grimsel-Lake has been arti-
ficially dammed up, as the illustrations show. It is fed by the waters of
the Aare from its source at the Unteraar-glacier. The dam has 114 m
height and locks a lake 5,5 km long, 100 deep and of 100 millions eubie-
meters produetive Contents. A second storage has been arranged on the
right hand side of the Valley by enlarging the Gelmerlake to 13 millions
eubiemeters Contents. About 50 % is formed in the lakes to be
discharged during the winter.

The article describes the engineers' difficulties in these altitudes and
adverse climatic conditions. The huge dam of Grimsellake for instance is
the second largest in the world having a wallmeasurement of 340 000 m,
crown 258 m long, 114 m high, 64 m wide at he bottom and 4 m wide at
the top. The Station at Handeck has been working since August 1929.
Work on the Grimsel was finished in Spring 1932, and it is proposed to
open it on October the First.

The architect, Armin Meili of Luzern here proposes the setting of a Board
for National Planning similar to that for England and for some parts of
Germany. The Board should examine all questions of colonisation, dis-