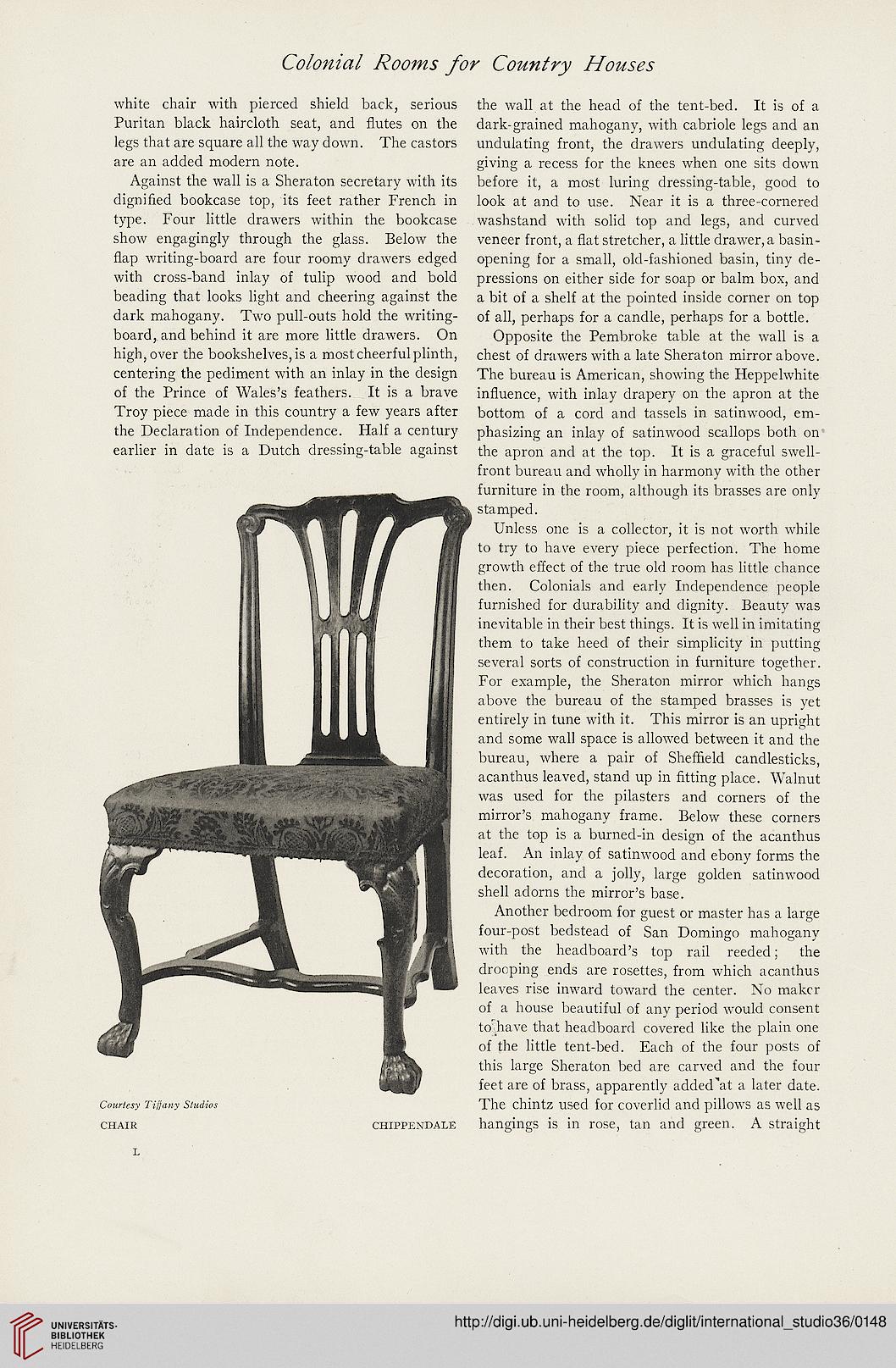 white chair with pierced shield back, serious
Puritan black haircloth seat, and fhites on the
iegs that are square aii the way down. The castors
are an added modern note.
Against the wail is a Sheraton secretary with its
dignihed bookcase top, its feet rather French in
type. Four littie drawers within the bookcase
show engagingiy through the glass. Below the
Hap writing-board are four roomy drawers edged
with cross-band inlay of tulip wood and bold
beading that looks light and cheering against the
dark mahogany. Two pull-outs hold the writing-
board, andbehind it are more little drawers. On
high,over the bookshelves,is a mostcheerfulplinth,
centering the pediment with an inlay in the design
of the Prince of Wales's feathers. It is a brave
Troy piece made in this country a few years after
the Declaration of Independence. Half a century
earlier in date is a Dutch dressing-table against

the wall at the head of the tent-bed. It is of a
dark-grained mahogany, with cabriole legs and an
undulating front, the drawers undulating deeply,
giving a recess for the knees when one sits down
before it, a most luring dressing-table, good to
look at and to use. Near it is a three-cornered
washstand with solid top and legs, and curved
veneer front, a Bat stretcher, a little drawer, a basin-
opening for a small, old-fashioned basin, tiny de-
pressions on either side for soap or balm box, and
a bit of a shelf at the pointed inside corner on top
of all, perhaps for a candle, perhaps for a bottle.
Opposite the Pembroke table at the wall is a
chest of drawers with a late Sheraton mirror above.
The bureau is American, showing the Heppelwhite
induence, with inlay drapery on the apron at the
bottom of a cord and tassels in satinwood, em-
phasizing an inlay of satinwood scaHops both on
the apron and at the top. It is a graceful swell-
front bureau and wholly in harmony with the other
furniture in the room, although its brasses are only
stamped.
Unless one is a collector, it is not worth while
to try to have every piece perfection. The home
growth effect of the true old room has little chance
then. Colonials and early Independence people
furnished for durability and dignity. Beauty was
inevitable in their best things. It is well in imitating
them to take heed of their simplicity in putting
several sorts of construction in furniture together.
For example, the Sheraton mirror which hangs
above the bureau of the stamped brasses is yet
entirely in tune with it. This mirror is an upright
and some wall space is allowed between it and the
bureau, where a pair of ShefReld candlesticks,
acanthus leaved, stand up in htting place. Walnut
was used for the pilasters and corners of the
mirror's mahogany frame. Below these corners
at the top is a burned-in design of the acanthus
leaf. An inlay of satinwood and ebony forms the
decoration, and a jolly, large golden satinwood
shell adorns the mirror's base.
Another bedroom for guest or master has a large
four-post bedstead of San Domingo mahogany
with the headboard's top rail reeded; the
drooping ends are rosettes, from which acanthus
leaves rise inward toward the center. No makcr
of a house beautiful of any period would consent
to .have that headboard covered like the plain one
of the little tent-bed. Each of the four posts of
this large Sheraton bed are carved and the four
feet are of brass, apparently added^at a later date.
The chintz used for coverlid and pillows as well as
hangings is in rose, tan and green. A straight