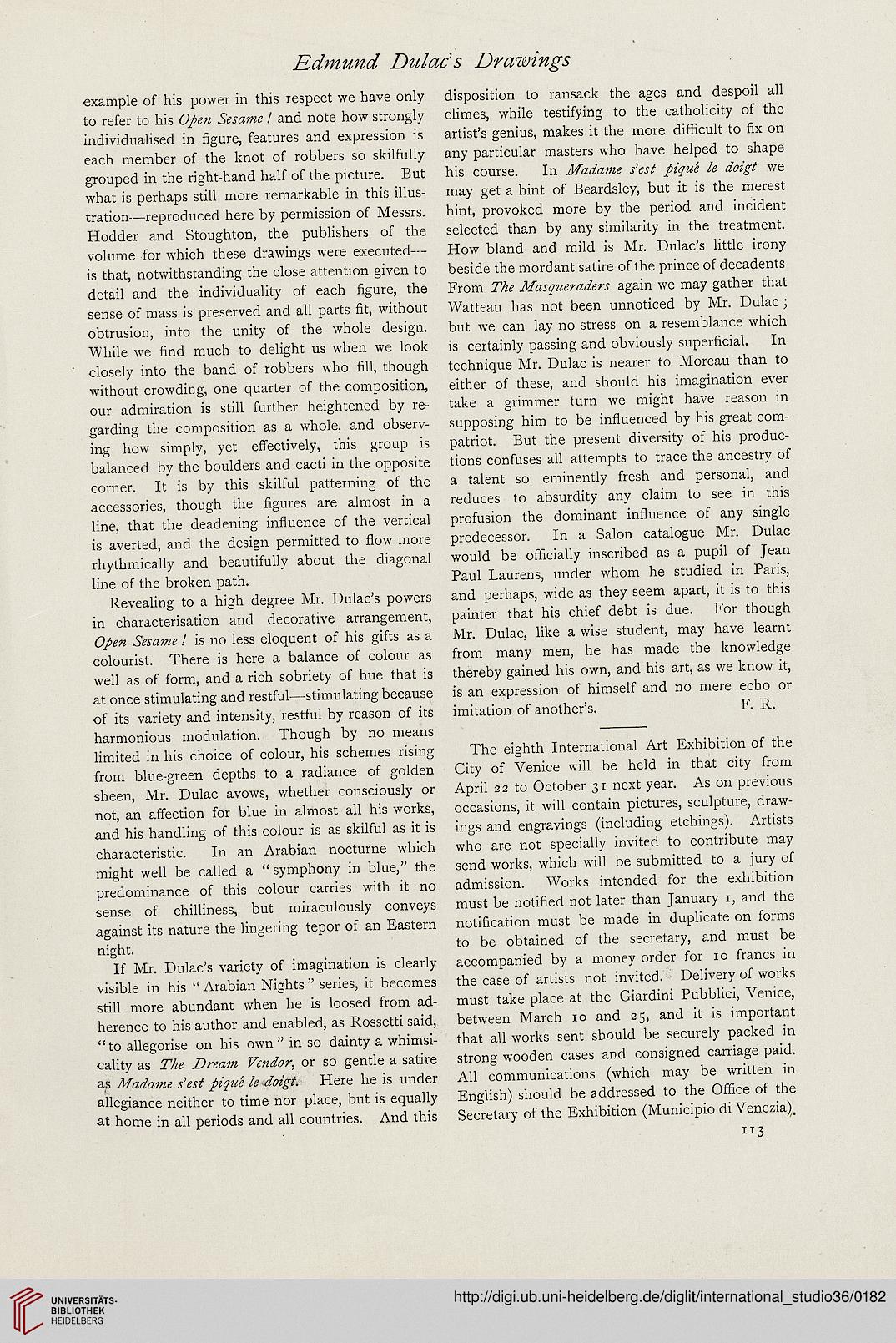 examp!e of his power in this respect we have on!y
to refer to his 6^73 -SMaTTK; / and note how strongiy
individua!ised in Hgure, features and expression is
each member of the knot of robbers so ski!fu!!y
grouped in the right-hand ha!f of the picture. But
what is perhaps sti!! more remarkable in this i!!us-
tration—reproduced here by permission of Messrs.
Hodder and Stoughton, the publishers of the
vo!ume for which these drawings were executed—
is that, notwithstanding the close attention given to
detai! and the individua!ity of each hgure, the
sense of mass is preserved and a!! parts ht, without
obtrusion, into the unity of the who!e design.
Whi!e we hnd much to de!ight us when we look
c!ose!y into the band of robbers who h!!, though
without crowding, one quarter of the composition,
our admiration is sti!! further heightened by re-
garding the composition as a who!e, and observ-
ing how simp!y, yet effective!y, this group is
balanced by the bou!ders and cacti in the opposite
corner. It is by this skilful patterning of the
accessories, though the hgures are almost in a
!ine, that the deadening induence of the vertica!
is averted, and the design permitted to ftow more
rhythmicahy and beautiful!y about the diagona!
!ine of the broken path.
Reveaiing to a high degree Mr. Dulac's powers
in characterisation and decorative arrangement,
Q<S<?73 -Skra/TM! / is no less eloquent of his gifts as a
colourist. There is here a balance of colour as
we!! as of form, and a rich sobriety of hue that is
at once stimuiating and restfu!—stimulating because
of its variety and intensity, restful by reason of its
harmonious modulation. Though by no means
!imited in his choice of colour, his schemes rising
from b!ue-green depths to a radiance of go!den
sheen, Mr. Dutac avows, whether conscious!y or
not, an affection for blue in almost al! his works,
and his hand!ing of this colour is as skHfu! as it is
characteristic. In an Arabian nocturne which
might weH be caHed a " symphony in b!ue," the
predominance of this colour carries with it no
sense of chiHiness, but miracu!ous!y conveys
against its nature the lingering tepor of an Eastern
night.
If Mr. Du!ac's variety of imagination is c!ear!y
visible in his " Arabian Nights " series, it becomes
stiH more abundant when he is loosed from ad-
herence to his author and enabled, as Rossetti said,
" to aHegorise on his own " in so dainty a whimsi-
ca!ity as A?7*<?<3773 %73<%?7*, or so gent!e a satire
as A?b<f<3773^ j'&r? ^3^73^ 3<? </<73^-3'. Here he is under
aHegiance neither to time nor p!ace, but is equally
at home in al! periods and a!! countries. And this

disposition to ransack the ages and despoi! aH
c!imes, whi!e testifying to the cathoHcity of the
artist's genius, makes it the more difhcuit to Hx on
any particuiar masters who have helped to shape
his course. In y'M? ^3^33^ </<33^/ we
may get a hint of Beardsley, but it is the merest
hint, provoked more by the period and incident
selected than by any simi!arity in the treatment.
How b!and and mi!d is Mr. Du!ac's little irony
beside the mordant satire of the prince of decadents
From 7H<? A/i3^y33^7-<3</^7-y again we may gather that
Watteau has not been unnoticed by Mr. Dulac;
but we can !ay no stress on a resemblance which
is certainly passing and obvious!y superficia!. In
technique Mr. Du!ac is nearer to Moreau than to
either of these, and shoutd his imagination ever
take a grimmer turn we might have reason in
supposing him to be inHuenced by his great com-
patriot. But the present diversity of his produc-
tions confuses aH attempts to trace the ancestry of
a ta!ent so eminently fresh and persona!, and
reduces to absurdity any c!aim to see in this
profusion the dominant inftuence of any sing!e
predecessor. In a Salon cata!ogue Mr. Dulac
wou!d be ofHcially inscribed as a pupi! of Jean
Pau! Laurens, under whom he studied in Paris,
and perhaps, wide as they seem apart, it is to this
painter that his chief debt is due. For though
Mr. Dulac, !ike a wise student, may have learnt
from many men, he has made the knowledge
thereby gained his own, and his art, as we know it,
is an expression of himself and no mere echo or
imitation of another's. F. R.

The eighth Internationa! Art Exhibition of the
City of Venice wiH be he!d in that city from
Apri! 22 to October gr next year. As on previous
occasions, it wiH contain pictures, sculpture, draw-
ings and engravings (induding etchings). Artists
who are not speciaHy invited to contribute may
send works, which wi!! be submitted to a jury of
admission. Works intended for the exhibition
must be notiHed not !ater than January 1, and the
notiHcation must be made in duplicate on forms
to be obtained of the secretary, and must be
accompanied by a money order for 10 francs in
the case of artists not invited. Delivery of works
must take place at the Giardini PubbHci, Venice,
between March 10 and 2g, and it is important
that all works sent sbould be securely packed in
strong wooden cases and consigned carriage paid.
AH communications (which may be written in
English) should be addressed to the OfHce of the
Secretary of the Exhibition (Municipio di Venezia),
113