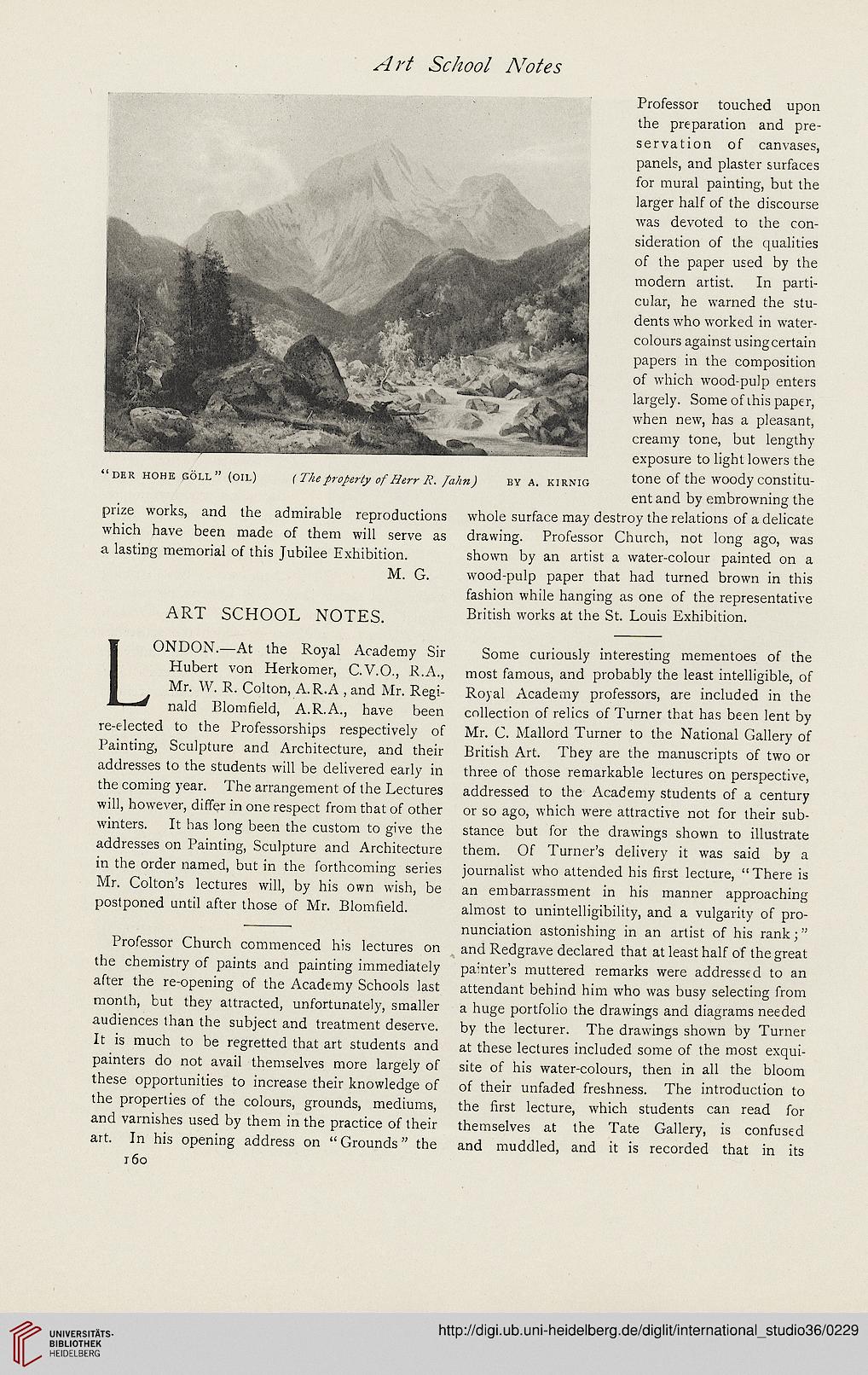 prize works, and the admirable reproductions
which have been made of them wih serve as
a iasting memorial of this Jubilee Exhibition.
M. G.
ART SCHOOL NOTES.
ONDON.—At the Royal Academy Sir
Hubert von Herkomer, C.V.O., R.A.,
Mr. W. R. Coiton, A.R.A , and Mr. Regi-
** naid Biomheld, A.R.A., have been
re-elected to the Professorships respectiveiy of
Painting, Sculpture and Architecture, and their
addresses to the students wiil be deiivered eariy in
the coming year. The arrangement of the Lectures
wiii, however, differ in one respect from that of other
winters. It has iong been the custom to give the
addresses on Painting, Scuipture and Architecture
in the order named, but in the forthcoming series
Mr. Coiton's iectures will, by his own wish, be
postponed until after those of Mr. Biomheid.

Professor Church commenced his iectures on
the chemistry of paints and painting immediateiy
after the re-opening of the Academy Schoois iast
month, but they attracted, unfortunateiy, smaiier
audiences than the subject and treatment deserve.
It is much to be regretted that art students and
painters do not avaii themselves more iargeiy of
these opportunities to increase their knowiedge of
the properties of the coiours, grounds, mediums,
and varnishes used by them in the practice of their
art. In his opening address on "Grounds" the
r6o

Professor touched upon
the preparation and pre-
servation of canvases,
paneis, and plaster surfaces
for murai painting, but the
iarger haif of the discourse
was devoted to the con-
sideration of the quaiities
of the paper used by the
modern artist. In parti-
cuiar, he warned the stu-
dents who worked in water-
coiours against usingcertain
papers in the composition
of which wood-puip enters
largely. Some of this pape r,
when new, has a pleasant,
creamy tone, but lengthy
exposure to light iowers the
tone of the woody constitu-
ent and by embrowning the
whoie surface may destroy the reiations of a delicate
drawing. Professor Church, not long ago, was
shown by an artist a water-colour painted on a
wood-pulp paper that had turned brown in this
fashion while hanging as one of the representative
British works at the St. Louis Exhibition.

Some curiously interesting mementoes of the
most famous, and probably the least intelligible, of
Royal Academy professors, are included in the
collection of relics of Turner that has been lent by
Mr. C. Mallord Turner to the National Gallery of
British Art. They are the manuscripts of two or
three of those remarkable lectures on perspective,
addressed to the Academy students of a century
or so ago, which were attractive not for their sub-
stance but for the drawings shown to illustrate
them. Of Turner's delivery it was said by a
journalist who attended his hrst lecture, "There is
an embarrassment in his manner approaching
almost to unintelligibility, and a vulgarity of pro-
nunciation astonishing in an artist of his rank;"
and Redgrave declared that at least half of the great
painter's muttered remarks were addressed to an
attendant behind him who was busy selecting from
a huge portfolio the drawings and diagrams needed
by the lecturer. The drawings shown by Turner
at these lectures included some of the most exqui-
site of his water-colours, then in all the bloom
of their unfaded freshness. The introduction to
the hrst lecture, which students can read for
themselves at the Tate Gallery, is confused
and muddled, and it is recorded that in its