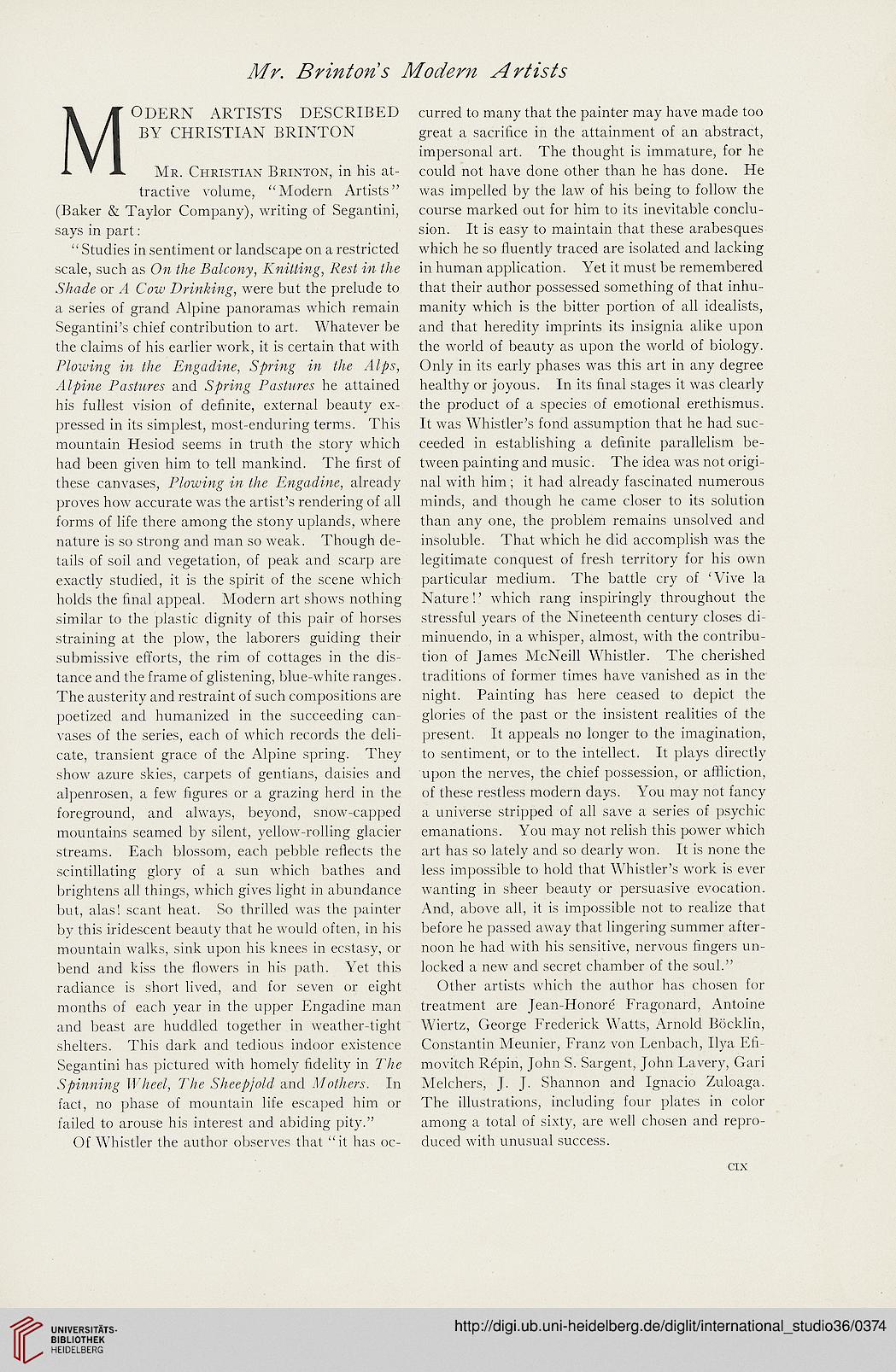 MR. CHRISTIAN BRINTON, in his a.t-
tractive voiume, "Modern Artists"
(Baker & Taylor Company), writing of Segantini,
says in part:
" Studies in sentiment or landscape on a restricted
scale, such as O?? Ba/cc??y, ??? //?e
A/?o?/e or .4 Ccw D?*???^???^, were but the prelude to
a series of grand Alpine panoramas which remain
Segantini's chief contribution to art. Whatever be
the claims of his earlier work, it is certain that with
P/ow???^ ??? %/?e E??g'<n/???e, Aj??*???^ ??? //?e A/J?x,
A/^???e T<M/M?-ey and Aj??-???^ jPfM/M?'as he attained
his fullest vision of dehnite, external beauty ex-
pressed in its simplest, most-enduring terms. This
mountain Hesiod seems in truth the story which
had been given him to tell mankind. The hrst of
these canvases, T/ow???g ??? //?e E??g'<n/???e, already
proves how accurate was the artist's rendering of all
forms of life there among the stony uplands, where
nature is so strong and man so weak. Though de-
tails of soil and vegetation, of peak and scarp are
exactly studied, it is the spirit of the scene which
holds the hnal appeal. Modern art shows nothing
similar to the plastic dignity of this pair of horses
straining at the plow, the laborers guiding their
submissive efforts, the rim of cottages in the dis-
tance and the frame of glistening, blue-white ranges.
The austerity and restraint of such compositions are
poetized and humanized in the succeeding can-
vases of the series, each of which records the deli-
cate, transient grace of the Alpine spring. They
show azure skies, carpets of gentians, daisies and
alpenrosen, a few hgures or a grazing herd in the
foreground, and always, beyond, snow-capped
mountains seamed by silent, yeliow-rolling glacier
streams. Each blossom, each pebble reflects the
scintillating glory of a sun which bathes and
brightens all things, which gives light in abundance
but, aias! scant heat. So thriiled was the painter
by this iridescent beauty that he would often, in his
mountain walks, sink upon his knees in ecstasy, or
bend and kiss the flowers in his path. Yet this
radiance is short lived, and for seven or eight
months of each year in the upper Engadine man
and beast are huddled together in weather-tight
shelters. This dark and tedious indoor existence
Segantini has pictured with homely hdelity in 77?e
Aj?????????^ 117?gg/, 77?e A/?ecJ?Jo/</ and Iti
fac), no phase of mountain life escaped him or
failed to arouse his interest and abiding pity."
Of Whistler the author observes that "it has oc-

curred to many that the painter may have made too
great a sacrihce in the attainment of an abstract,
impersonal art. The thought is immature, for he
could not have done other than he has done. He
was impelled by the law of his being to follow the
course marked out for him to its inevitable conclu-
sion. It is easy to maintain that these arabesques
which he so Ruently traced are isolated and lacking
in human application. Yet it must be remembered
that their author possessed something of that inhu-
manity which is the bitter portion of all idealists,
and that heredity imprints its insignia alike upon
the world of beauty as upon the world of biology.
Only in its early phases was this art in any degree
healthy or joyous. In its Anal stages it was clearly
the product of a species of emotional erethismus.
It was Whistler's fond assumption that he had suc-
ceeded in establishing a dehnite parallelism be-
tween painting and music. The idea was not origi-
nal with him; it had already fascinated numerous
minds, and though he came closer to its solution
than any one, the problem remains unsolved and
insoluble. That which he did accomplish was the
legitimate conquest of fresh territory for his own
particular medium. The battle cry of 'Vive 1a
Nature!' which rang inspiringly throughout the
stressful years of the Nineteenth century closes di-
minuendo, in a whisper, almost, with the contribu-
tion of James McNeill Whistler. The cherished
traditions of former times have vanished as in the
night. Painting has here ceased to depict the
glories of the past or the insistent realities of the
present. It appeals no ionger to the imagination,
to sentiment, or to the intellect. It plays direct'y
upon the nerves, the chief possession, or afHiction,
of these restless modern days. You may not fancy
a universe stripped of all save a series of psychic
emanations. You may not relish this power which
art has so lately and so dearly won. It is none the
less impossible to hold that Whistler's work is ever
wanting in sheer beauty or persuasive evocation.
And, above all, it is impossible not to realize that
before he passed away that lingering summer after-
noon he had with his sensitive, nervous hngers un-
locked a new and secrgt chamber of the soul."
Other artists which the author has chosen for
treatment are Jean-Honore Fragonard, Antoine
Wiertz, George Frederick Watts, Arnold Bocklin,
Constantin Meunier, Franz von Lenbach, Ilya Efi-
movitch Repin, John S. Sargent, John Lavery, Gari
Melchers, J. J. Shannon and Ignacio Zuloaga.
The illustrations, including four plates in color
among a total of sixty, are well chosen and repro-
duced with unusual success.