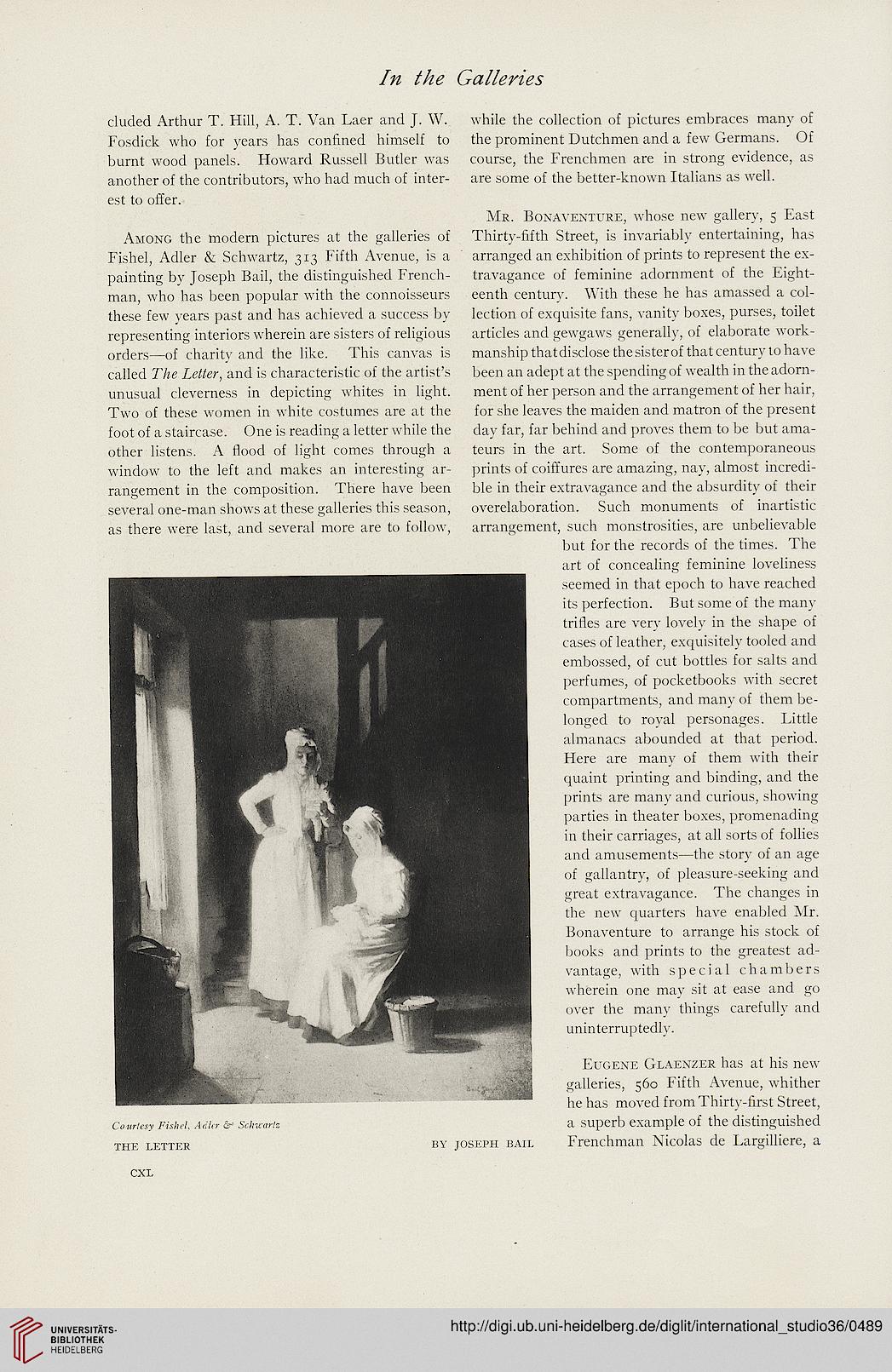 
duded Arthur T. Hth, A. T. Va.n Laer and J. W.
Fosdick who for years has confined himseif to
burnt wood paneis. Howard RusseH Butier was
another of the contributors, who had much of inter-
est to offer.
AMONG the modern pictures at the gaiieries of
Fishei, Adier & Schwartz, 313 Fifth Avenue, is a
painting by Joseph Baii, the distinguished French-
man, who has been popuiar with the connoisseurs
these few years past and has achieved a success by
representing interiors wherein are sisters of reiigious
orders—of charity and the iike. This canvas is
calied 77?g LeMer, and is characteristic of the artist's
unusuai cleverness in depicting whites in iight.
Two of these women in white costumes are at the
foot of a staircase. One is reading a letter whiie the
other listens. A Hood of iight comes through a
window to the ieft and makes an interesting ar-
rangement in the composition. There have been
severai one-man shows at these gaheries this season,
as there were last, and severai more are to foiiow,

while the coilection of pictures embraces many of
the prominent Dutchmen and a few Germans. Of
course, the Frenchmen are in strong evidence, as
are some of the better-known Itaiians as welh
MR. BoNAVENTURE, whose new gallery, 5 East
Thirty-hfth Street, is invariably entertaining, has
arranged an exhibition of prints to represent the ex-
travagance of feminine adornment of the Eight-
eenth century. With these he has amassed a col-
lection of exquisite fans, vanity boxes, purses, toilet
articles and gewgaws generaHy, of elaborate work-
manship thatdisciose thesisterof that century to have
been an adept at the spending of wealth in the adorn-
ment of her person and the arrangement of her hair,
for she ieaves the maiden and matron of the present
day far, far behind and proves them to be but ama-
teurs in the art. Some of the contemporaneous
prints of coiffures are amazing, nay, almost incredi-
bie in their extravagance and the absurdity of their
overeiaboration. Such monuments of inartistic
arrangement, such monstrosities, are unbelievable
but for the records of the times. The
art of conceaiing feminine loveliness
seemed in that epoch to have reached
its perfection. But some of the many
triffes are very lovely in the shape of
cases of leather, exquisitely tooled and
embossed, of cut bottles for salts and
perfumes, of pocketbooks with secret
compartments, and many of them be-
longed to royal personages. Little
almanacs abounded at that period.
Here are many of them with their
quaint printing and binding, and the
prints are many and curious, showing
parties in theater boxes, promenading
in their carriages, at all sorts of follies
and amusements—the story of an age
of gallantry, of pleasure-seeking and
great extravagance. The changes in
the new quarters have enabled Mr.
Bonaventure to arrange his stock of
books and prints to the greatest ad-
vantage, with special chambers
wherein one may sit at ease and go
over the many things carefully and
uninterruptedly.

THE LETTER BY JOSEPH BAIL

EuGENE GLAENZER has at his new
galleries, 560 Fifth Avenue, whither
he has moved from Thirty-hrst Street,
a superb example of the distinguished
Frenchman Nicolas de Largilliere, a