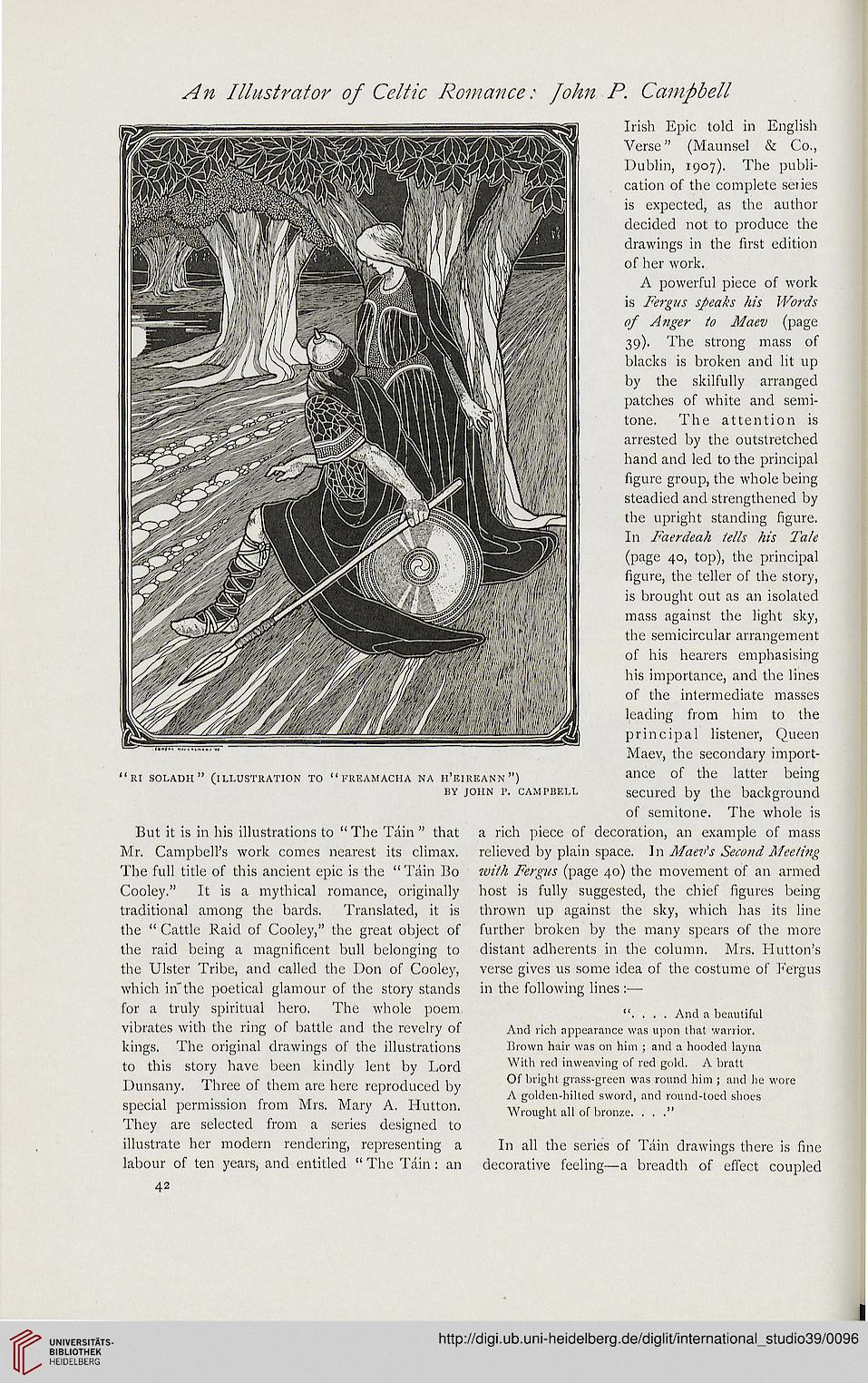 Irish Epic told in English
Verse" (Maunsel & Co.,
Dublin, 1907). The publi-
cation of the complete seiies
is expected, as the author
decided not to produce the
drawings in the first edition
of her work.

A powerful piece of work
is Fergus speaks his Words
of Anger to Maev (page
39). The strong mass of
blacks is broken and lit up
by the skilfully arranged
patches of white and semi-
tone. The attention is
arrested by the outstretched
hand and led to the principal
figure group, the whole being
steadied and strengthened by
the upright standing figure.
In Faerdeah tells his Tale
(page 40, top), the principal
figure, the teller of the story,
is brought out as an isolated
mass against the light sky,
the semicircular arrangement
of his hearers emphasising
his importance, and the lines
of the intermediate masses
leading from him to the
principal listener, Queen
Maev, the secondary import-

by John p. campbell secured by the background
of semitone. The whole is

But it is in his illustrations to " The Tain " that a rich piece of decoration, an example of mass

Cooley." It is a mythical romance, originally host is fully suggested, the chief figures being

traditional among the bards. Translated, it is thrown up against the sky, which has its line

the " Cattle Raid of Cooley," the great object of further broken by the many spears of the more

the raid being a magnificent bull belonging to distant adherents in the column. Mrs. Mutton's

the Ulster Tribe, and called the Don of Cooley, verse gives us some idea of the costume of Fergus

which in"the poetical glamour of the story stands in the following lines:—
for a truly spiritual hero. The whole poem 11 _ _ ^nd a beautiful

vibrates with the ring of battle and the revelry of And rich appearance was upon that warrior,

kings. The original drawings of the illustrations Brown hair was on him ; and a hooded layna

to this story have been kindly lent by Lord With red inweaving of red gold. A bratt

special permission from Mrs. Mary A. Mutton.
They are selected from a series designed to
illustrate her modern rendering, representing a In all the series of Tain drawings there is fine

labour of ten years, and entitled " The Tain : an decorative feeling—a breadth of effect coupled
42

A goldeil-hilted sword, and round-locd shoes
Wrought all of bronze. . . ."