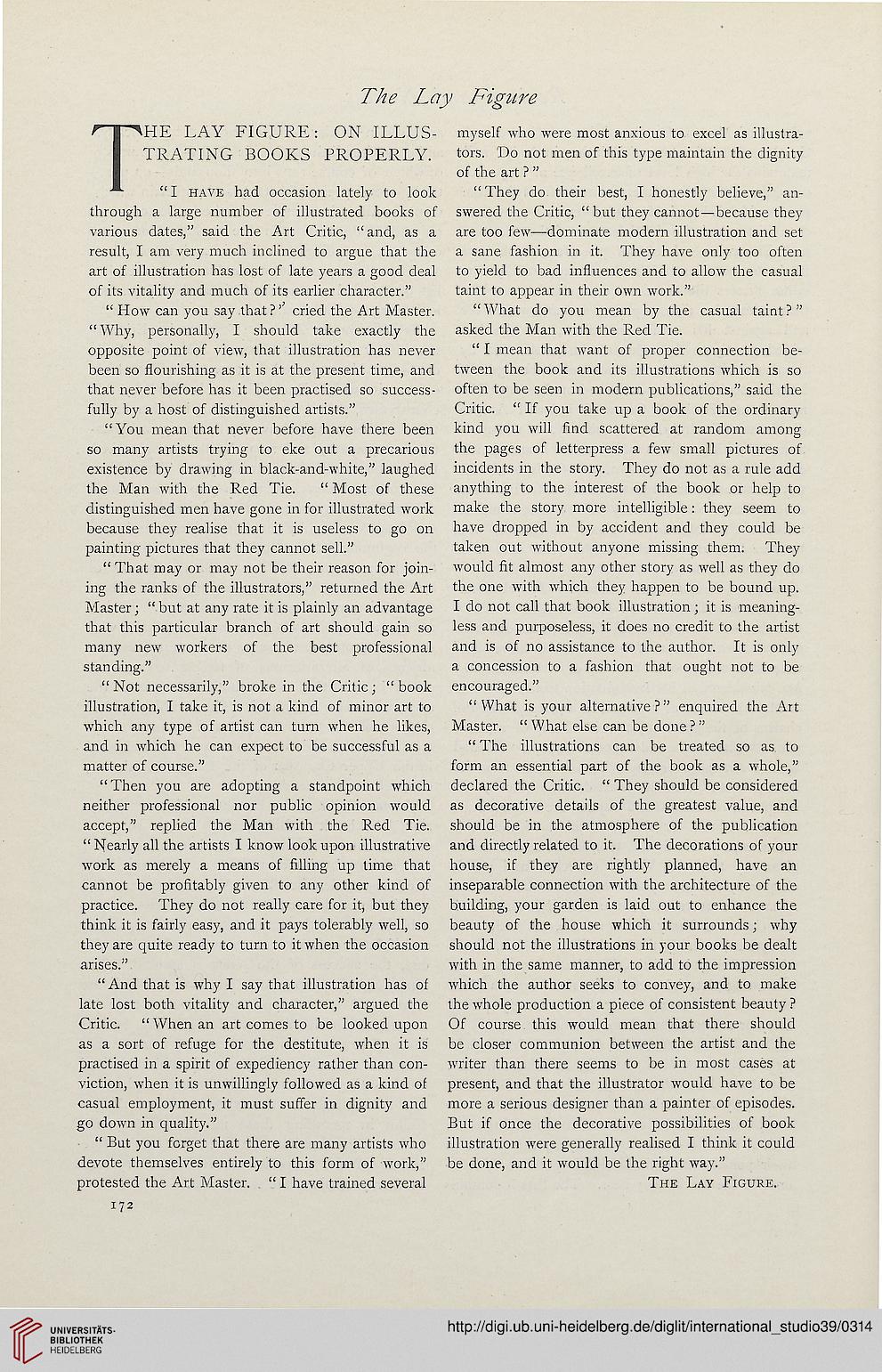 THE LAY FIGURE: ON ILLUS-
TRATING BOOKS PROPERLY.
" I have had occasion lately to look
through a large number of illustrated books of
various dates," said the Art Critic, "and, as a
result, I am very much inclined to argue that the
art of illustration has lost of late years a good deal
of its vitality and much of its earlier character."

" How can you say that?' cried the Art Master.
" Why, personally, I should take exactly the
opposite point of view, that illustration has never
been so flourishing as it is at the present time, and
that never before has it been practised so success-
fully by a host of distinguished artists."

"You mean that never before have there been
so many artists trying to eke out a precarious
existence by drawing in black-and-white," laughed
the Man with the Red Tie. " Most of these
distinguished men have gone in for illustrated work
because they realise that it is useless to go on
painting pictures that they cannot sell."

" That may or may not be their reason for join-
ing the ranks of the illustrators," returned the Art
Master; " but at any rate it is plainly an advantage
that this particular branch of art should gain so
many new workers of the best professional
standing."

" Not necessarily," broke in the Critic ; " book
illustration, I take it, is not a kind of minor art to
which any type of artist can turn when he likes,
and in which he can expect to be successful as a
matter of course."

" Then you are adopting a standpoint which
neither professional nor public opinion would
accept," replied the Man with the Red Tie.
" Nearly all the artists I know look upon illustrative
work as merely a means of filling up time that
cannot be profitably given to any other kind of
practice. They do not really care for it, but they
think it is fairly easy, and it pays tolerably well, so
they are quite ready to turn to it when the occasion
arises."

"And that is why I say that illustration has of
late lost both vitality and character," argued the
Critic. " When an art comes to be looked upon
as a sort of refuge for the destitute, when it is
practised in a spirit of expediency rather than con-
viction, when it is unwillingly followed as a kind of
casual employment, it must suffer in dignity and
go down in quality."

" But you forget that there are many artists who
devote themselves entirely to this form of work,"
protested the Art Master. . " I have trained several
172

myself who were most anxious to excel as illustra-
tors. 'Do not men of this type maintain the dignity
of the art ? "

" They do their best, I honestly believe," an-
swered the Critic, "but they cannot—because they
are too few—dominate modern illustration and set
a sane fashion in it. They have only too often
to yield to bad influences and to allow the casual
taint to appear in their own work."

"What do you mean by the casual taint?"
asked the Man with the Red Tie.

" I mean that want of proper connection be-
tween the book and its illustrations which is so
often to be seen in modern publications," said the
Critic. " If you take up a book of the ordinary
kind you will find scattered at random among
the pages of letterpress a few small pictures of
incidents in the story. They do not as a rule add
anything to the interest of the book or help to
make the story more intelligible: they seem to
have dropped in by accident and they could be
taken out without anyone missing them. They
would fit almost any other story as well as they do
the one with which they happen to be bound up.
I do not call that book illustration; it is meaning-
less and purposeless, it does no credit to the artist
and is of no assistance to the author. It is only
a concession to a fashion that ought not to be
encouraged."

"What is your alternative?" enquired the Art
Master. " What else can be done ? "

" The illustrations can be treated so as to
form an essential part of the book as a whole,"
declared the Critic. " They should be considered
as decorative details of the greatest value, and
should be in the atmosphere of the publication
and directly related to it. The decorations of your
house, if they are rightly planned, have an
inseparable connection with the architecture of the
building, your garden is laid out to enhance the
beauty of the house which it surrounds; why
should not the illustrations in your books be dealt
with in the same manner, to add to the impression
which the author seeks to convey, and to make
the whole production a piece of consistent beauty ?
Of course this would mean that there should
be closer communion between the artist and the
writer than there seems to be in most cases at
present, and that the illustrator would have to be
more a serious designer than a painter of episodes.
But if once the decorative possibilities of book
illustration were generally realised I think it could
be done, and it would be the right way."