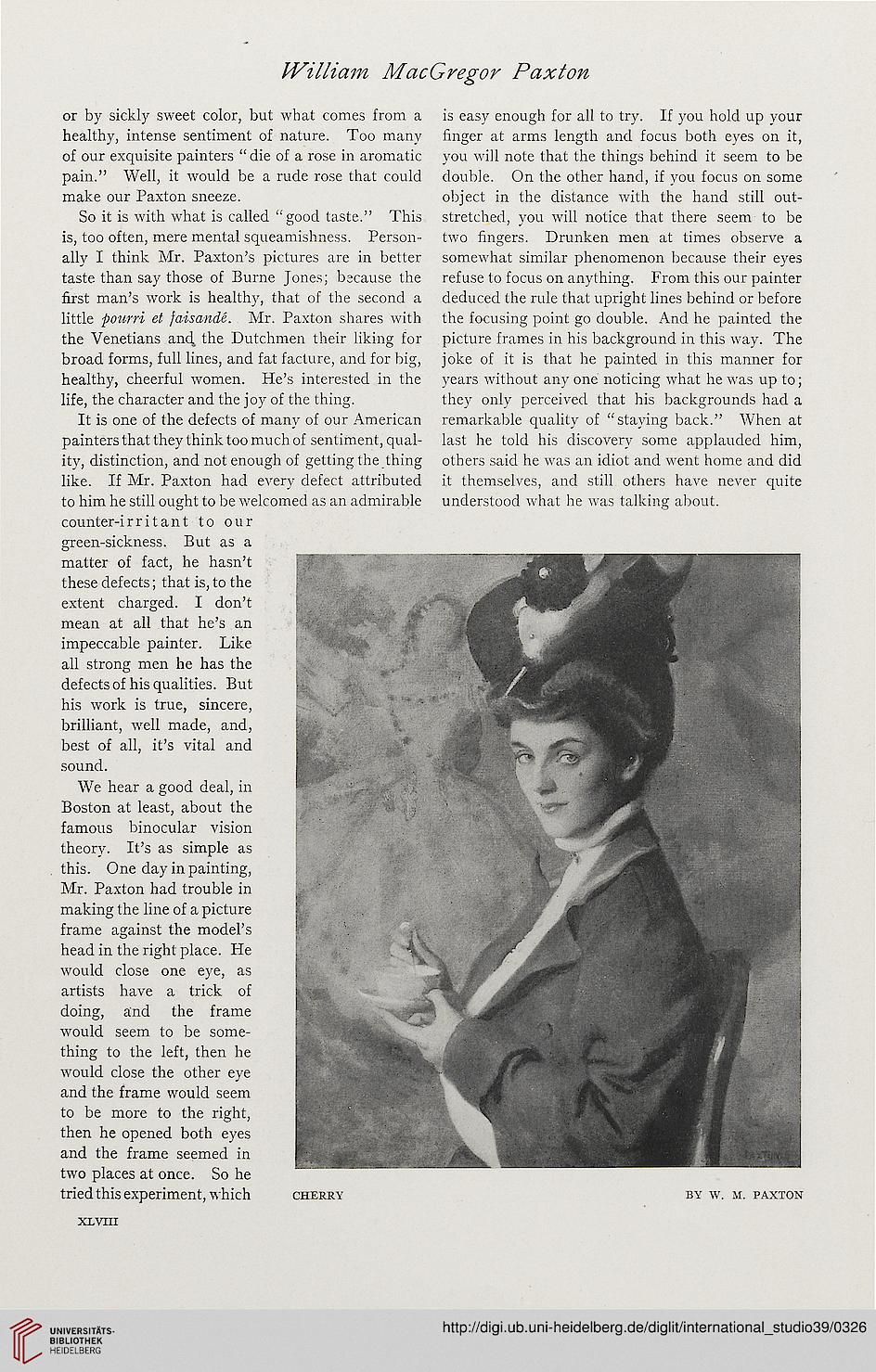 or by sickly sweet color, but what comes from a is easy enough for all to try. If you hold up your
healthy, intense sentiment of nature. Too many finger at arms length and focus both eyes on it,
of our exquisite painters "die of a rose in aromatic you will note that the things behind it seem to be
pain." Well, it would be a rude rose that could double. On the other hand, if you focus on some
make our Paxton sneeze. object in the distance with the hand still out-

So it is with what is called "good taste." This stretched, you will notice that there seem to be
is, too often, mere mental squeamishness. Person- two fingers. Drunken men at times observe a
ally I think Mr. Paxton's pictures are in better somewhat similar phenomenon because their eyes
taste than say those of Burne Jones; because the refuse to focus on anything. From this our painter
first man's work is healthy, that of the second a deduced the rule that upright lines behind or before
little pourri et faisande. Mr. Paxton shares with the focusing point go double. And he painted the
the Venetians and, the Dutchmen their liking for picture frames in his background in this way. The
broad forms, full lines, and fat facture, and for big, joke of it is that he painted in this manner for
healthy, cheerful women. He's interested in the years without any one noticing what he was up to;
life, the character and the joy of the thing. they only perceived that his backgrounds had a

It is one of the defects of many of our American remarkable quality of "staying back." When at
painters that they think too much of sentiment, qual- last he told his discovery some applauded him,
ity, distinction, and not enough of getting the thing others said he was an idiot and went home and did
like. If Mr. Paxton had every defect attributed it themselves, and still others have never quite
to him he still ought to be welcomed as an admirable understood what he was talking about,
counter-irritant to our
green-sickness. But as a

these defects; that is, to the

mean at all that he's an

all strong men he has the

defects of his qualities. But

his work is true, sincere,

brilliant, well made, and,

best of all, it's vital and

We hear a good deal, in
Boston at least, about the jP^jk
famous binocular vision ' J/KSl

theory. It's as simple as
this. One day in painting,

Mr. Paxton had trouble in ^Bk
making the line of a picture
frame against the model's

head in the right place. He Jar mKk

would close one eye, as

artists have a trick of -JS^Wr^ d|

to be more to the right, \
then he opened both eyes

two places at once. So he

tried this experiment, which cherry by w. m. paxton