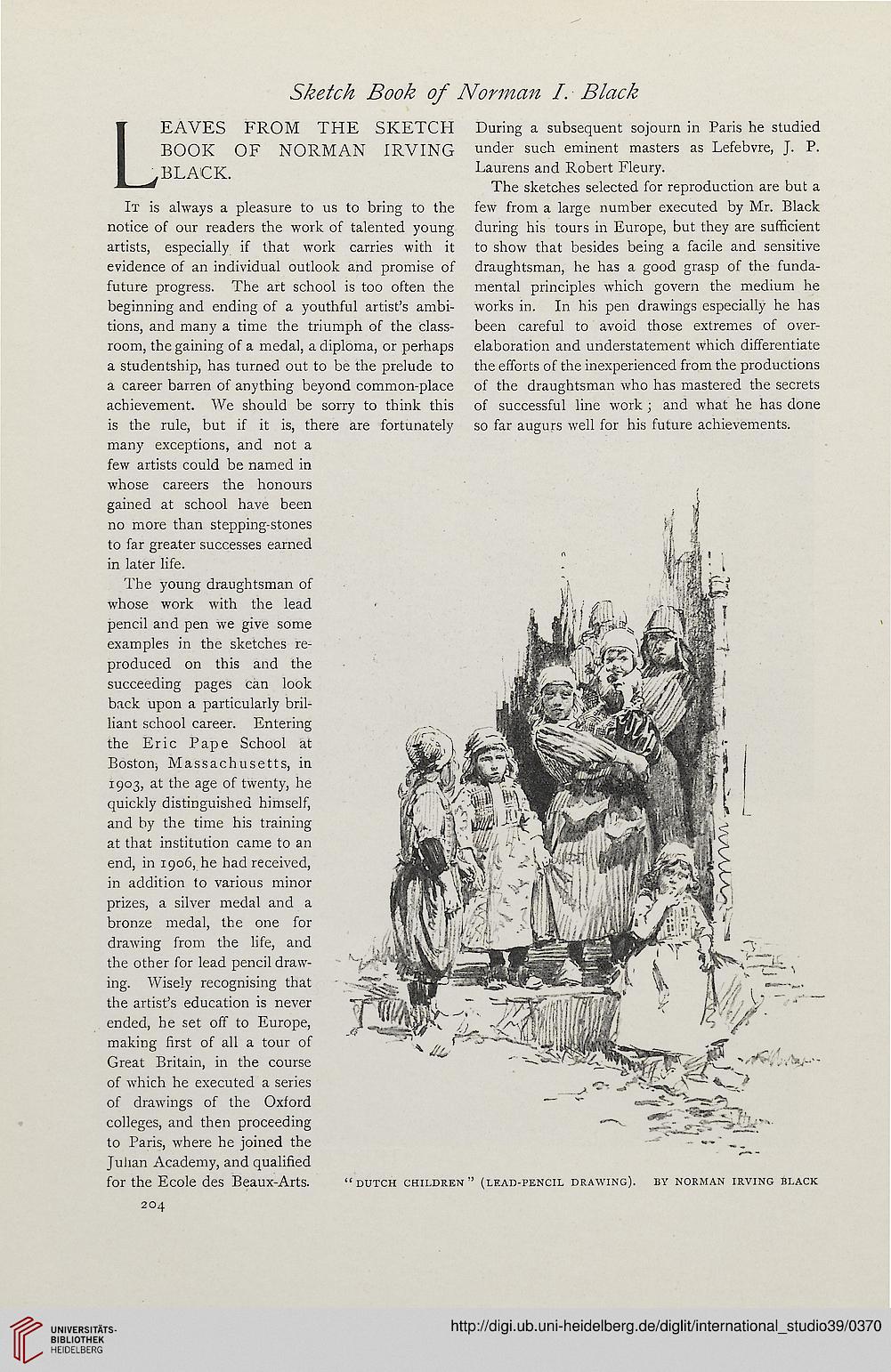 Information about OCR text
Sketch Book of Norman I. Black

LEAVES FROM THE SKETCH During a subsequent sojourn in Paris he studied
BOOK OF NORMAN IRVING under such eminent masters as Lefebvre, J. P.
BLACK Laurens and Robert Fleury.

The sketches selected for reproduction are but a
It is always a pleasure to us to bring to the few from a large number executed by Mr. Black
notice of our readers the work of talented young during his tours in Europe, but they are sufficient
artists, especially if that work carries with it to show that besides being a facile and sensitive
evidence of an individual outlook and promise of draughtsman, he has a good grasp of the funda-
future progress. The art school is too often the mental principles which govern the medium he
beginning and ending of a youthful artist's ambi- works in. In his pen drawings especially he has
tions, and many a time the triumph of the class- been careful to avoid those extremes of over-
room, the gaining of a medal, a diploma, or perhaps elaboration and understatement which differentiate
a studentship, has turned out to be the prelude to the efforts of the inexperienced from the productions
a career barren of anything beyond common-place of the draughtsman who has mastered the secrets
achievement. We should be sorry to think this of successful line work ; and what he has done
is the rule, but if it is, there are fortunately so far augurs well for his future achievements,
many exceptions, and not a
few artists could be named in
whose careers the honours
gained at school have been
no more than stepping-stones
to far greater successes earned
in later life.

The young draughtsman of
whose work with the lead
pencil and pen we give some
examples in the sketches re-
produced on this and the
succeeding pages can look
back upon a particularly bril-
liant school career. Entering
the Eric Pape School at
Boston, Massachusetts, in
1903, at the age of twenty, he
quickly distinguished himself,
and by the time his training
at that institution came to an
end, in 1906, he had received,
in addition to various minor
prizes, a silver medal and a
bronze medal, the one for
drawing from the life, and
the other for lead pencil draw-
ing. Wisely recognising that
the artist's education is never
ended, he set off to Europe,
making first of all a tour of
Great Britain, in the course
of which he executed a series
of drawings of the Oxford
colleges, and then proceeding
to Paris, where he joined the
Julian Academy, and qualified