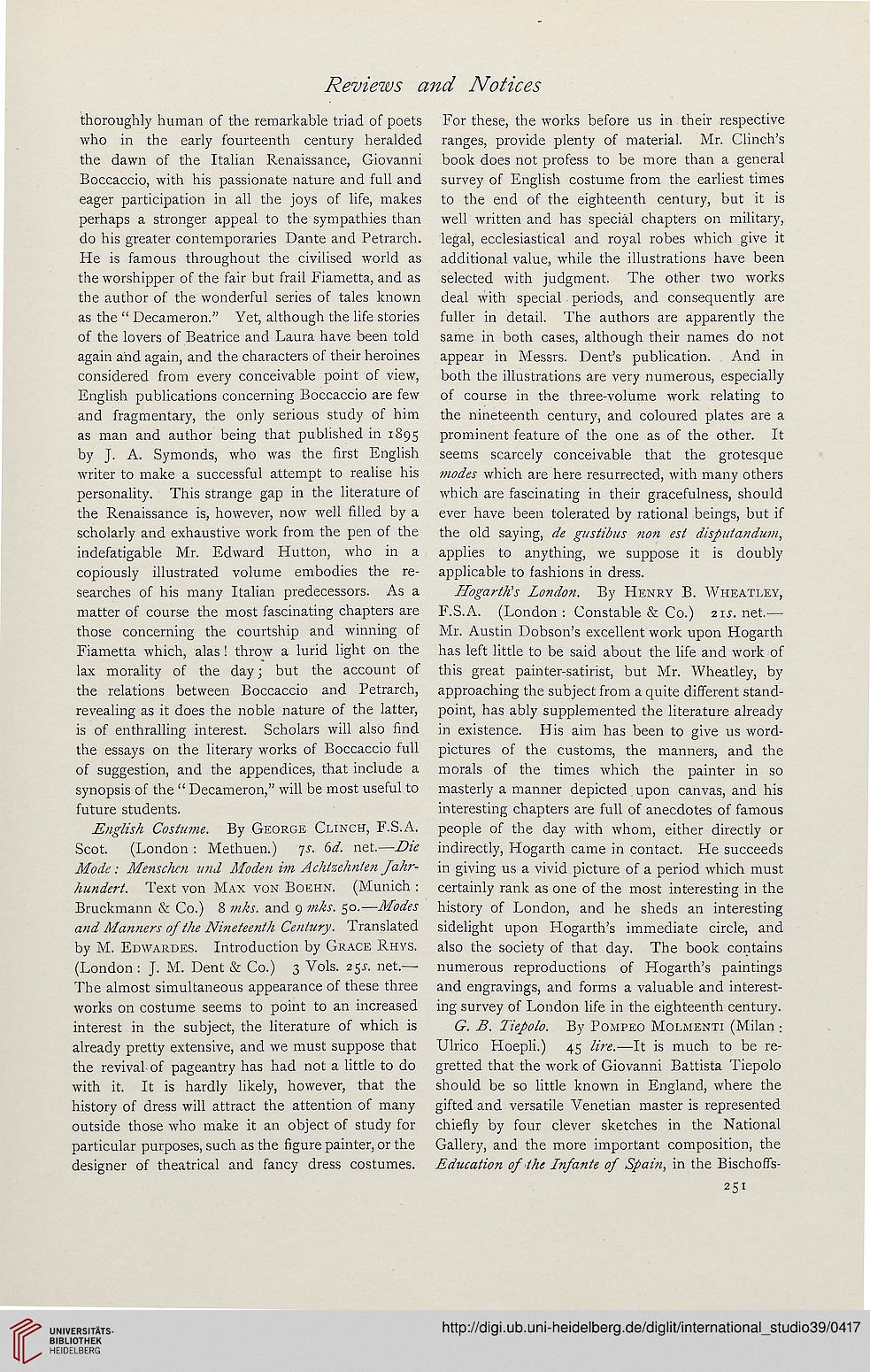 thoroughly human of the remarkable triad of poets
who in the early fourteenth century heralded
the dawn of the Italian Renaissance, Giovanni
Boccaccio, with his passionate nature and full and
eager participation in all the joys of life, makes
perhaps a stronger appeal to the sympathies than
do his greater contemporaries Dante and Petrarch.
He is famous throughout the civilised world as
the worshipper of the fair but frail Fiametta, and as
the author of the wonderful series of tales known
as the " Decameron." Yet, although the life stories
of the lovers of Beatrice and Laura have been told
again and again, and the characters of their heroines
considered from every conceivable point of view,
English publications concerning Boccaccio are few
and fragmentary, the only serious study of him
as man and author being that published in 1895
by J. A. Symonds, who was the first English
writer to make a successful attempt to realise his
personality. This strange gap in the literature of
the Renaissance is, however, now well filled by a
scholarly and exhaustive work from the pen of the
indefatigable Mr. Edward Hutton, who in a
copiously illustrated volume embodies the re-
searches of his many Italian predecessors. As a
matter of course the most fascinating chapters are
those concerning the courtship and winning of
Fiametta which, alas ! throw a lurid light on the
lax morality of the day; but the account of
the relations between Boccaccio and Petrarch,
revealing as it does the noble nature of the latter,
is of enthralling interest. Scholars will also find
the essays on the literary works of Boccaccio full
of suggestion, and the appendices, that include a
synopsis of the " Decameron," will be most useful to
future students.

English Cosiume. By George Clinch, F.S.A.
Scot. (London : Methuen.) js. 6d. net.—Die
Mode: Menschcn und Moden im Achizehnten Jahr-
hundert. Text von Max von Boehn. (Munich :
Bruckmann & Co.) 8 mks. and 9 mks. 50.—Modes
and Manners of the Nineteenth Century. Translated
by M. Edwardes. Introduction by Grace Rhys.
(London : J. M. Dent & Co.) 3 Vols. 25net.—
The almost simultaneous appearance of these three
works on costume seems to point to an increased
interest in the subject, the literature of which is
already pretty extensive, and we must suppose that
the revival of pageantry has had not a little to do
with it. It is hardly likely, however, that the
history of dress will attract the attention of many
outside those who make it an object of study for
particular purposes, such as the figure painter, or the
designer of theatrical and fancy dress costumes.

For these, the works before us in their respective
ranges, provide plenty of material. Mr. Clinch's
book does not profess to be more than a general
survey of English costume from the earliest times
to the end of the eighteenth century, but it is
well written and has special chapters on military,
legal, ecclesiastical and royal robes which give it
additional value, while the illustrations have been
selected with judgment. The other two works
deal with special periods, and consequently are
fuller in detail. The authors are apparently the
same in both cases, although their names do not
appear in Messrs. Dent's publication. And in
both the illustrations are very numerous, especially
of course in the three-volume work relating to
the nineteenth century, and coloured plates are a
prominent feature of the one as of the other. It
seems scarcely conceivable that the grotesque
modes which are here resurrected, with many others
which are fascinating in their gracefulness, should
ever have been tolerated by rational beings, but if
the old saying, de gustibus non est despulandum,
applies to anything, we suppose it is doubly
applicable to fashions in dress.

Hogarth's London. By Henry B. Wheatley,
F.S.A. (London: Constable & Co.) 2ij-.net.—
Mr. Austin Dobson's excellent work upon Hogarth
has left little to be said about the life and work of
this great painter-satirist, but Mr. Wheatley, by
approaching the subject from a quite different stand-
point, has ably supplemented the literature already
in existence. His aim has been to give us word-
pictures of the customs, the manners, and the
morals of the times which the painter in so
masterly a manner depicted upon canvas, and his
interesting chapters are full of anecdotes of famous
people of the day with whom, either directly or
indirectly, Hogarth came in contact. He succeeds
in giving us a vivid picture of a period which must
certainly rank as one of the most interesting in the
history of London, and he sheds an interesting
sidelight upon Hogarth's immediate circle, and
also the society of that day. The book contains
numerous reproductions of Hogarth's paintings
and engravings, and forms a valuable and interest-
ing survey of London life in the eighteenth century.

G. B. liepolo. By Pompeo Molmenti (Milan :
Ulrico Hoepli.) 45 lire.—It is much to be re-
gretted that the work of Giovanni Battista Tiepolo
should be so little known in England, where the
gifted and versatile Venetian master is represented
chiefly by four clever sketches in the National
Gallery, and the more important composition, the
Education of the Infante of Spain, in the Bischoffs-