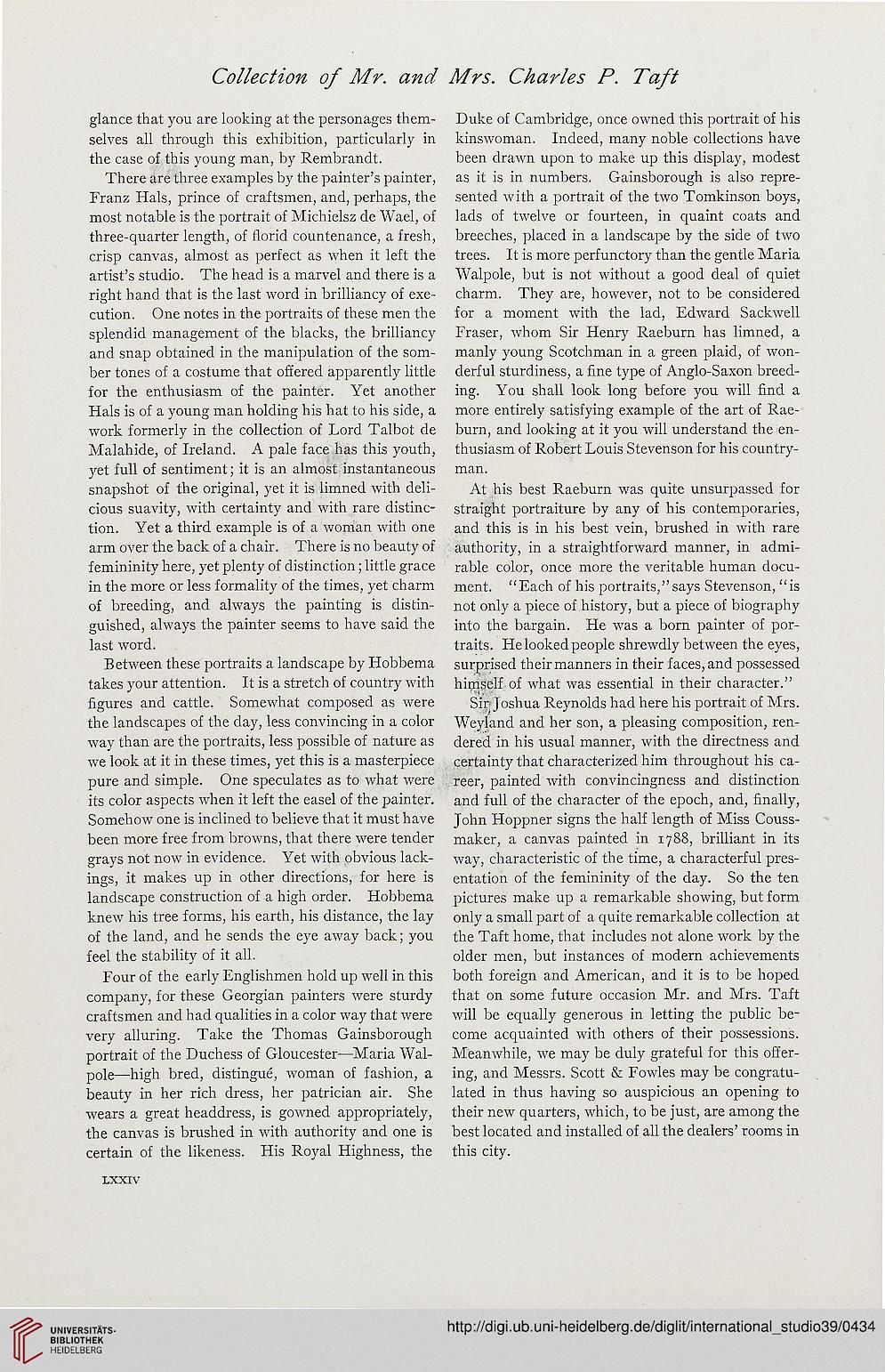 glance that you are looking at the personages them-
selves all through this exhibition, particularly in
the case of this young man, by Rembrandt.

There are three examples by the painter's painter,
Franz Hals, prince of craftsmen, and, perhaps, the
most notable is the portrait of Michielsz de Wael, of
three-quarter length, of florid countenance, a fresh,
crisp canvas, almost as perfect as when it left the
artist's studio. The head is a marvel and there is a
right hand that is the last word in brilliancy of exe-
cution. One notes in the portraits of these men the
splendid management of the blacks, the brilliancy
and snap obtained in the manipulation of the som-
ber tones of a costume that offered apparently little
for the enthusiasm of the painter. Yet another
Hals is of a young man holding his hat to his side, a
work formerly in the collection of Lord Talbot de
Malahide, of Ireland. A pale face has this youth,
yet full of sentiment; it is an almost instantaneous
snapshot of the original, yet it is limned with deli-
cious suavity, with certainty and with rare distinc-
tion. Yet a third example is of a woman with one
arm over the back of a chair. There is no beauty of
femininity here, yet plenty of distinction; little grace
in the more or less formality of the times, yet charm
of breeding, and always the painting is distin-
guished, always the painter seems to have said the
last word.

Between these portraits a landscape by Hobbema
takes your attention. It is a stretch of country with
figures and cattle. Somewhat composed as were
the landscapes of the day, less convincing in a color
way than are the portraits, less possible of nature as
we look at it in these times, yet this is a masterpiece
pure and simple. One speculates as to what were
its color aspects when it left the easel of the painter.
Somehow one is inclined to believe that it must have
been more free from browns, that there were tender
grays not now in evidence. Yet with obvious lack-
ings, it makes up in other directions, for here is
landscape construction of a high order. Hobbema
knew his tree forms, his earth, his distance, the lay
of the land, and he sends the eye away back; you
feel the stability of it all.

Four of the early Englishmen hold up well in this
company, for these Georgian painters were sturdy
craftsmen and had qualities in a color way that were
very alluring. Take the Thomas Gainsborough
portrait of the Duchess of Gloucester—Maria Wal-
pole—high bred, distingue, woman of fashion, a
beauty in her rich dress, her patrician air. She
wears a great headdress, is gowned appropriately,
the canvas is brushed in with authority and one is
certain of the likeness. His Royal Highness, the

Duke of Cambridge, once owned this portrait of his
kinswoman. Indeed, many noble collections have
been drawn upon to make up this display, modest
as it is in numbers. Gainsborough is also repre-
sented with a portrait of the two Tomkinson boys,
lads of twelve or fourteen, in quaint coats and
breeches, placed in a landscape by the side of two
trees. It is more perfunctory than the gentle Maria
Walpole, but is not without a good deal of quiet
charm. They are, however, not to be considered
for a moment with the lad, Edward Sackwell
Fraser, whom Sir Henry Raeburn has limned, a
manly young Scotchman in a green plaid, of won-
derful sturdiness, a fine type of Anglo-Saxon breed-
ing. You shall look long before you will find a
more entirely satisfying example of the art of Rae-
burn, and looking at it you will understand the en-
thusiasm of Robert Louis Stevenson for his country-
man.

At his best Raeburn was quite unsurpassed for
straight portraiture by any of his contemporaries,
and this is in his best vein, brushed in with rare
authority, in a straightforward manner, in admi-
rable color, once more the veritable human docu-
ment. "Each of his portraits,"says Stevenson, "is
not only a piece of history, but a piece of biography
into the bargain. He was a born painter of por-
traits. He looked people shrewdly between the eyes,
surprised their manners in their faces, and possessed
himself of what was essential in their character."

Sir Joshua Reynolds had here his portrait of Mrs.
Weyland and her son, a pleasing composition, ren-
dered in his usual manner, with the directness and
certainty that characterized him throughout his ca-
reer, painted with convincingness and distinction
and full of the character of the epoch, and, finally,
John Hoppner signs the half length of Miss Couss-
maker, a canvas painted in 1788, brilliant in its
way, characteristic of the time, a characterful pres-
entation of the femininity of the day. So the ten
pictures make up a remarkable showing, but form
only a small part of a quite remarkable collection at
the Taft home, that includes not alone work by the
older men, but instances of modern achievements
both foreign and American, and it is to be hoped
that on some future occasion Mr. and Mrs. Taft
will be equally generous in letting the public be-
come acquainted with others of their possessions.
Meanwhile, we may be duly grateful for this offer-
ing, and Messrs. Scott & Fowles may be congratu-
lated in thus having so auspicious an opening to
their new quarters, which, to be just, are among the
best located and installed of all the dealers' rooms in
this city.