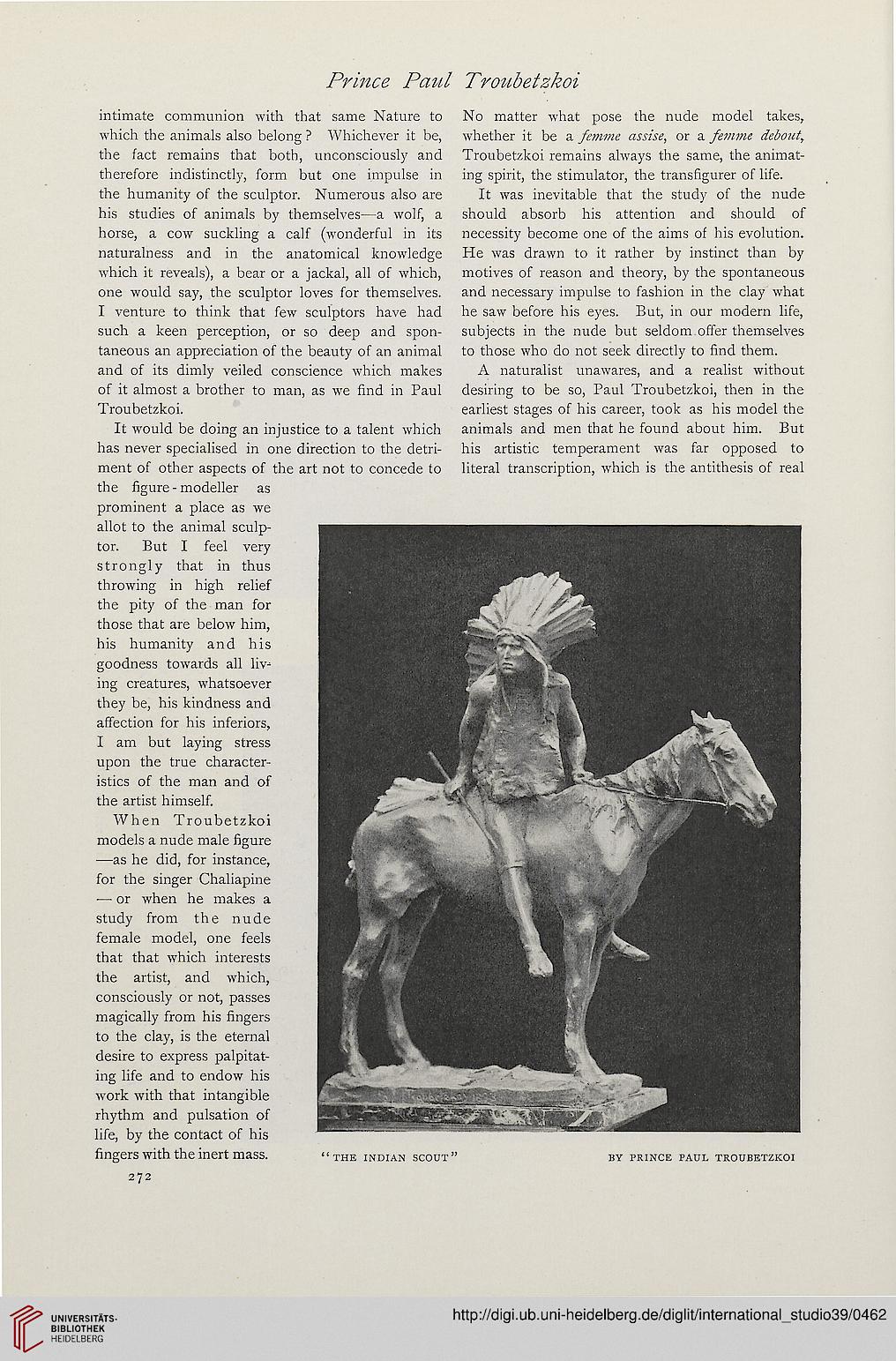 intimate communion with that same Nature to No matter what pose the nude model takes,
which the animals also belong ? Whichever it be, whether it be a femme assise, or a femme debont,
the fact remains that both, unconsciously and Troubetzkoi remains always the same, the animat-
therefore indistinctly, form but one impulse in ing spirit, the stimulator, the transfigurer of life,
the humanity of the sculptor. Numerous also are It was inevitable that the study of the nude
his studies of animals by themselves—a wolf, a should absorb his attention and should of
horse, a cow suckling a calf (wonderful in its necessity become one of the aims of his evolution,
naturalness and in the anatomical knowledge He was drawn to it rather by instinct than by
which it reveals), a bear or a jackal, all of which, motives of reason and theory, by the spontaneous
one would say, the sculptor loves for themselves, and necessary impulse to fashion in the clay what
I venture to think that few sculptors have had he saw before his eyes. But, in our modern life,
such a keen perception, or so deep and spon- subjects in the nude but seldom offer themselves
taneous an appreciation of the beauty of an animal to those who do not seek directly to find them,
and of its dimly veiled conscience which makes A naturalist unawares, and a realist without
of it almost a brother to man, as we find in Paul desiring to be so, Paul Troubetzkoi, then in the
Troubetzkoi. earliest stages of his career, took as his model the

It would be doing an injustice to a talent which animals and men that he found about him. But
has never specialised in one direction to the detri- his artistic temperament was far opposed to
ment of other aspects of the art not to concede to literal transcription, which is the antithesis of real
the figure - modeller as
prominent a place as we
allot to the animal sculp-
tor. But I feel very
strongly that in thus
throwing in high relief
the pity of the man for
those that are below him,
his humanity and his
goodness towards all livj
ing creatures, whatsoever
they be, his kindness and
affection for his inferiors,
I am but laying stress
upon the true character-
istics of the man and of
the artist himself.

When Troubetzkoi
models a nude male figure
—as he did, for instance,
for the singer Chaliapine
— or when he makes a
study from the nude
female model, one feels
that that which interests
the artist, and which,
consciously or not, passes
magically from his fingers
to the clay, is the eternal
desire to express palpitat-
ing life and to endow his
work with that intangible
rhythm and pulsation of
life, by the contact of his

fingers with the inert mass. "the indian scout" by prince paul troubetzkoi