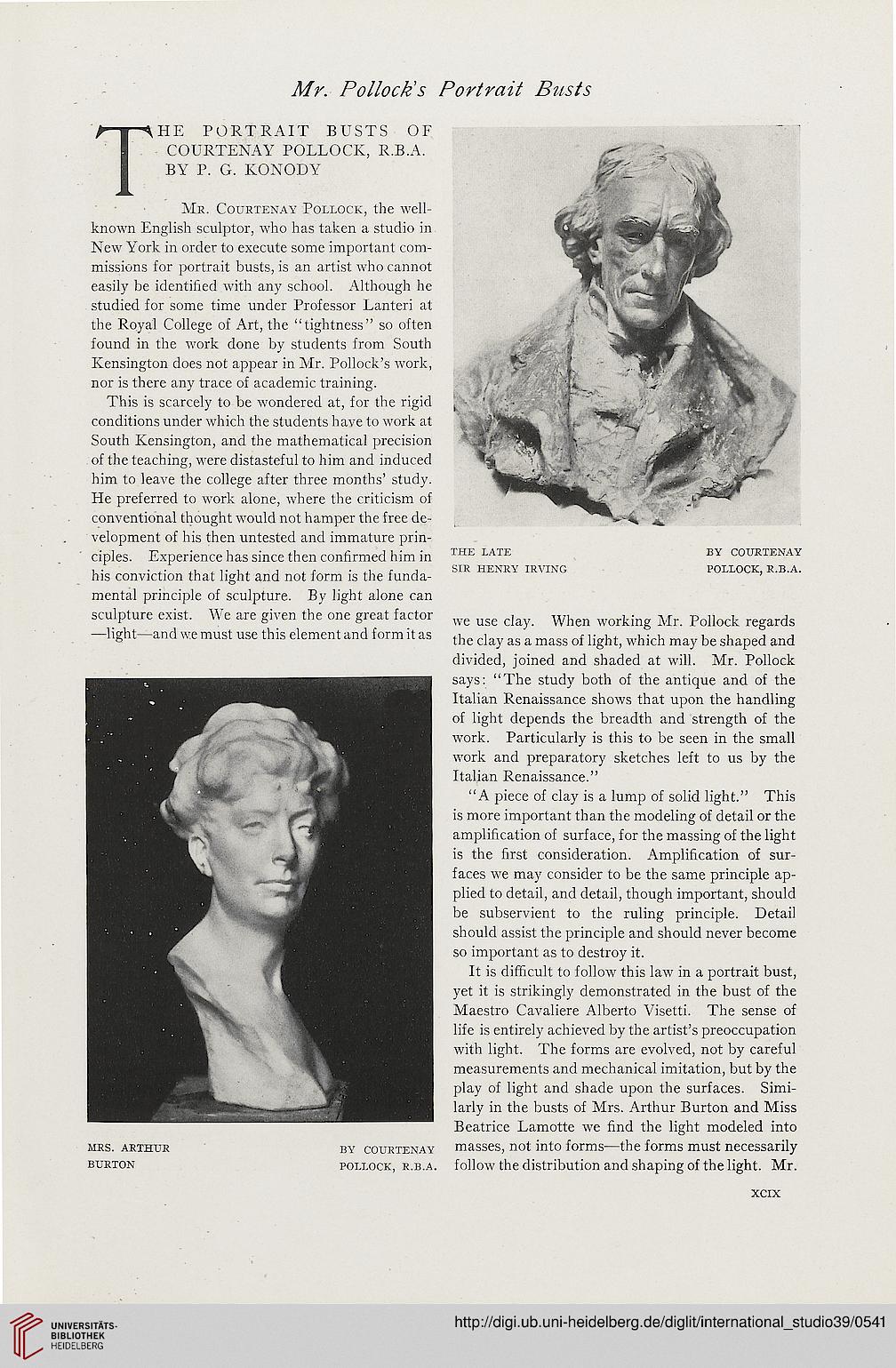 Me. Codrtenay Pollock, the well-
known English sculptor, who has taken a studio in
New York in order to execute some important com-
missions for portrait busts, is an artist who cannot
easily be identified with any school. Although he
studied for some time under Professor Lanteri at
the Royal College of Art, the "tightness" so often
found in the work done by students from South
Kensington does not appear in Mr. Pollock's work,
nor is there any trace of academic training.

This is scarcely to be wondered at, for the rigid
conditions under which the students have to work at
South Kensington, and the mathematical precision
of the teaching, were distasteful to him and induced
him to leave the college after three months' study.
He preferred to work alone, where the criticism of
conventional thought would not hamper the free de-
velopment of his then untested and immature prin-
ciples. Experience has since then confirmed him in
his conviction that light and not form is the funda-
mental principle of sculpture. By light alone can
sculpture exist. We are given the one great factor
—light—and we must use this element and form it as

the late by courtenay

we use clay. When working Mr. Pollock regards
the clay as a mass of light, which may be shaped and
divided, joined and shaded at will. Mr. Pollock
says: "The study both of the antique and of the
Italian Renaissance shows that upon the handling
of light depends the breadth and strength of the
work. Particularly is this to be seen in the small
work and preparatory sketches left to us by the
Italian Renaissance."

"A piece of clay is a lump of solid light." This
is more important than the modeling of detail or the
amplification of surface, for the massing of the light
is the first consideration. Amplification of sur-
faces we may consider to be the same principle ap-
plied to detail, and detail, though important, should
be subservient to the ruling principle. Detail
should assist the principle and should never become
so important as to destroy it.

It is difficult to follow this law in a portrait bust,
yet it is strikingly demonstrated in the bust of the
Maestro Cavaliere Alberto Visetti. The sense of
life is entirely achieved by the artist's preoccupation
with light. The forms are evolved, not by careful
measurements and mechanical imitation, but by the
play of light and shade upon the surfaces. Simi-
larly in the busts of Mrs. Arthur Burton and Miss
Beatrice Lamotte we find the light modeled into
masses, not into forms—the forms must necessarily
follow the distribution and shaping of the light. Mr.