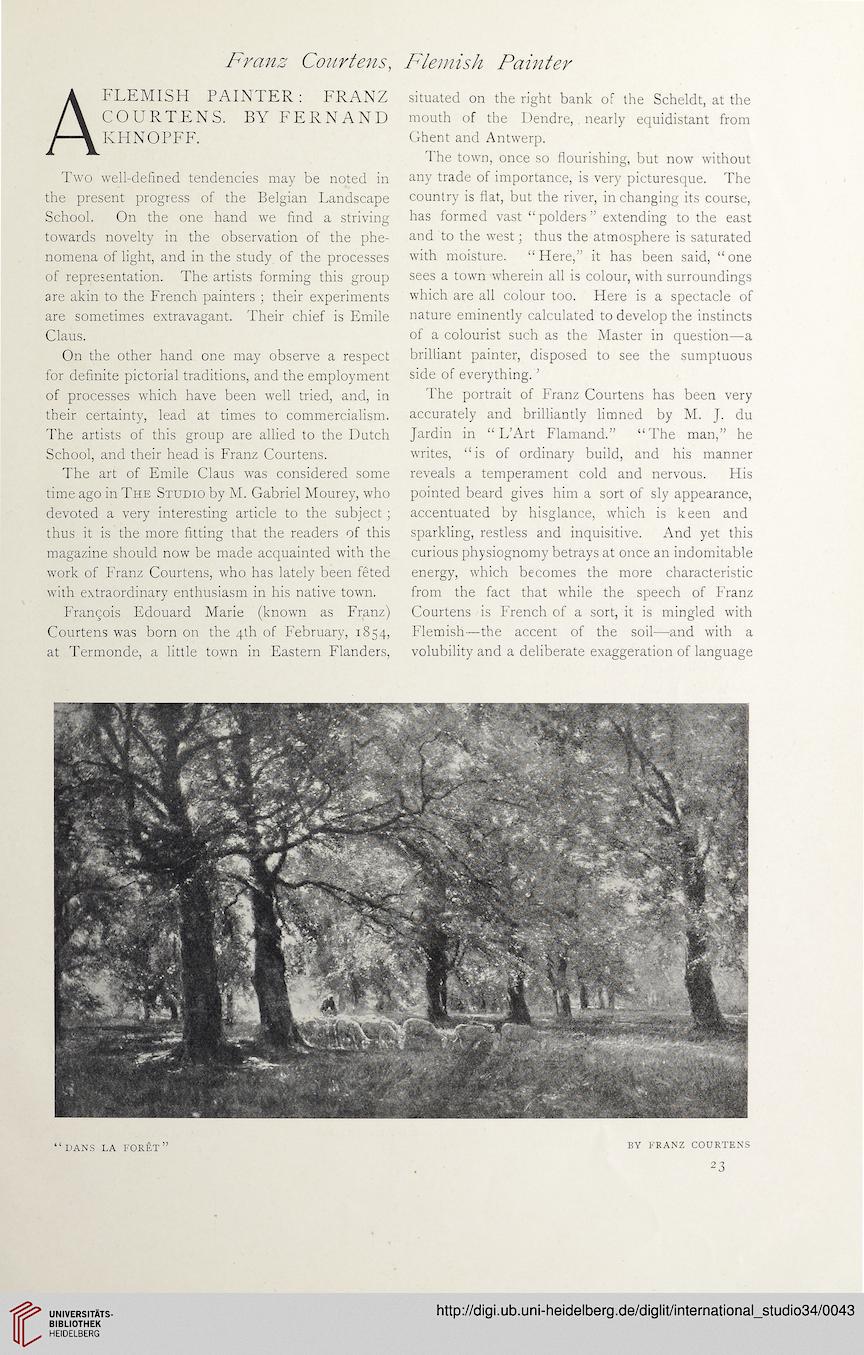 A FLEMISH PAINTER: FRANZ
COURTENS. BY FERNAND
KHNOPFF.
Two well-defined tendencies may be noted in
the present progress of the Belgian Landscape
School. On the one hand we find a striving
towards novelty in the observation of the phe-
nomena of light, and in the study of the processes
of representation. The artists forming this group
are akin to the French painters ; their experiments
are sometimes extravagant. Their chief is Emile
Claus.
On the other hand one may observe a respect
for definite pictorial traditions, and the employment
of processes which have been well tried, and, in
their certainty, lead at times to commercialism.
The artists of this group are allied to the Dutch
School, and their head is Franz Courtens.
The art of Emile Claus was considered some
time ago in The Studio by M. Gabriel Mourey, who
devoted a very interesting article to the subject;
thus it is the more fitting that the readers of this
magazine should now be made acquainted with the
work of Franz Courtens, who has lately been feted
with extraordinary enthusiasm in his native town.
Francois Edouard Marie (known as Franz)
Courtens was born on the 4th of February, 1854,
at Termonde, a little town in Eastern Flanders,

situated on the right bank of the Scheldt, at the
mouth of the Dendre, nearly equidistant from
Ghent and Antwerp.
The town, once so flourishing, but now without
any trade of importance, is very picturesque. The
country is flat, but the river, in changing its course,
has formed vast “polders” extending to the east
and to the west • thus the atmosphere is saturated
with moisture. “Here,” it has been said, “one
sees a town wherein all is colour, with surroundings
which are all colour too. Here is a spectacle of
nature eminently calculated to develop the instincts
of a colourist such as the Master in question—a
brilliant painter, disposed to see the sumptuous
side of everything.”
The portrait of Franz Courtens has been very
accurately and brilliantly limned by M. J. du
Jardin in “ L’Art Flamand.” “The man,” he
writes, “is of ordinary build, and his manner
reveals a temperament cold and nervous. His
pointed beard gives him a sort of sly appearance,
accentuated by hisglance, which is keen and
sparkling, restless and inquisitive. And yet this
curious physiognomy betrays at once an indomitable
energy, which becomes the more characteristic
from the fact that while the speech of Franz
Courtens is French of a sort, it is mingled with
Flemish—the accent of the soil—and with a
volubility and a deliberate exaggeration of language