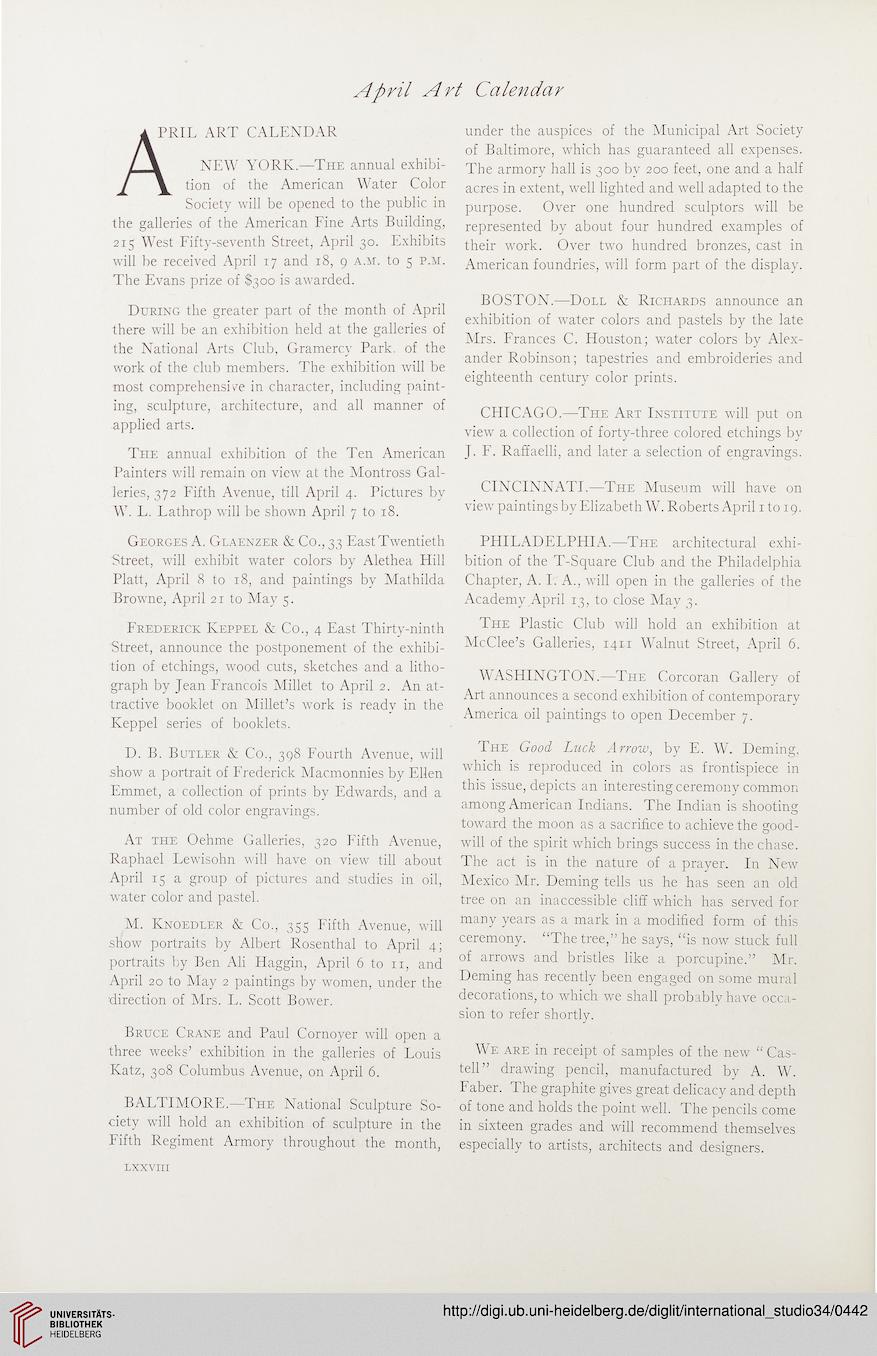 A PRIL ART CALENDAR
/ \ NEW YORK.—The annual exhibi-
J \ tion of the American Water Color
Society will be opened to the public in
the galleries of the American Fine Arts Building,
215 West Fifty-seventh Street, April 30. Exhibits
will be received April 17 and 18, 9 a.m. to 5 p.m.
The Evans prize of $300 is awarded.
During the greater part of the month of April
there will be an exhibition held at the galleries of
the National Arts Club, Gramercy Park, of the
work of the club members. The exhibition will be
most comprehensive in character, including paint-
ing, sculpture, architecture, and all manner of
applied arts.
The annual exhibition of the Ten American
Painters will remain on view at the Montross Gal-
leries, 372 Fifth Avenue, till April 4. Pictures by
W. L. Lathrop will be shown April 7 to 18.
Georges A. Glaenzer & Co., 33 East Twentieth
Street, will exhibit water colors by Alethea Hill
Platt, April 8 to 18, and paintings by Mathilda
Browne, April 21 to May 5.
Frederick Keppel & Co., 4 East Thirty-ninth
Street, announce the postponement of the exhibi-
tion of etchings, wood cuts, sketches and a litho-
graph by Jean Francois Millet to April 2. An at-
tractive booklet on Millet’s work is ready in the
Keppel series of booklets.
D. B. Butler & Co., 398 Fourth Avenue, will
show a portrait of Frederick Macmonnies by Ellen
Emmet, a collection of prints by Edwards, and a
number of old color engravings.
At the Oehme Galleries, 320 Fifth Avenue,
Raphael Lewisohn will have on view till about
April 15 a group of pictures and studies in oil,
water color and pastel.
M. Knoedlf.r & Co., 355 Fifth Avenue, will
show portraits by Albert Rosenthal to April 4;
portraits by Ben Ali Haggin, April 6 to 11, and
April 20 to May 2 paintings by women, under the
direction of Mrs. L. Scott Bower.
Bruce Crane and Paul Cornoyer will open a
three weeks’ exhibition in the galleries of Louis
Katz, 308 Columbus Avenue, on April 6.
BALTIMORE.—The National Sculpture So-
ciety will hold an exhibition of sculpture in the
Fifth Regiment Armory throughout the month,

under the auspices of the Municipal Art Society
of Baltimore, which has guaranteed all expenses.
The armory hall is 300 by 200 feet, one and a half
acres in extent, well lighted and well adapted to the
purpose. Over one hundred sculptors will be
represented by about four hundred examples of
their work. Over two hundred bronzes, cast in
American foundries, will form part of the display.
BOSTON.—Doll & Richards announce an
exhibition of water colors and pastels by the late
Mrs. Frances C. Houston; water colors by Alex-
ander Robinson; tapestries and embroideries and
eighteenth century color prints.
CHICAGO.—The Art Institute will put on
view a collection of forty-three colored etchings by
J. F. Raffaelli, and later a selection of engravings.
CINCINNATI.—The Museum will have on
view paintings bv Elizabeth W. Roberts April 1 to 19.
PHILADELPHIA.—The architectural exhi-
bition of the T-Square Club and the Philadelphia
Chapter, A. I. A., will open in the galleries of the
Academy April 13, to close May 3.
The Plastic Club will hold an exhibition at
McClee’s Galleries, 1411 Walnut Street, April 6.
WASHINGTON.—The Corcoran Gallery of
Art announces a second exhibition of contemporary
America oil paintings to open December 7.
The Good Luck Arrow, by E. W. Deming,
which is reproduced in colors as frontispiece in
this issue, depicts an interesting ceremony common
among American Indians. The Indian is shooting
toward the moon as a sacrifice to achieve the good-
will of the spirit which brings success in the chase.
The act is in the nature of a prayer. In New
Mexico Mr. Deming tells us he has seen an old
tree on an inaccessible cliff which has served for
many years as a mark in a modified form of this
ceremony. “The tree,” he says, “is now stuck full
of arrows and bristles like a porcupine.” Mr.
Deming has recently been engaged on some mural
decorations, to which we shall probably have occa-
sion to refer shortly.
We are in receipt of samples of the new “ Cas-
tell” drawing pencil, manufactured by A. W.
Faber. The graphite gives great delicacy and depth
of tone and holds the point well. The pencils come
in sixteen grades and will recommend themselves
especially to artists, architects and designers.