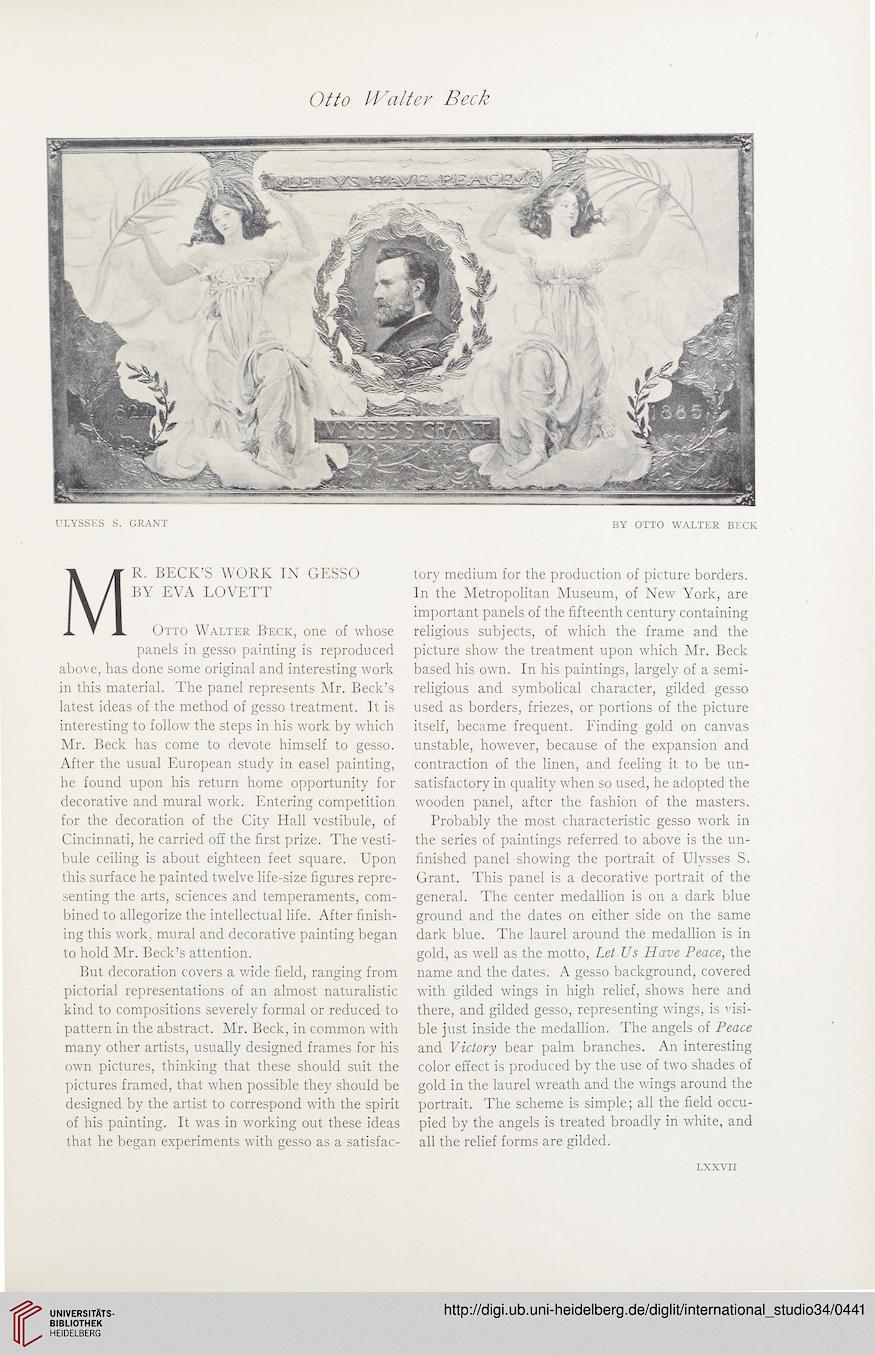 Otto Walter Beck, one of whose
panels in gesso painting is reproduced
above, has done some original and interesting work
in this material. The panel represents Mr. Beck’s
latest ideas of the method of gesso treatment. It is
interesting to follow the steps in his work by which
Mr. Beck has come to devote himself to gesso.
After the usual European study in easel painting,
he found upon his return home opportunity for
decorative and mural work. Entering competition
for the decoration of the City Hall vestibule, of
Cincinnati, he carried off the first prize. The vesti-
bule ceiling is about eighteen feet square. Upon
this surface he painted twelve life-size figures repre-
senting the arts, sciences and temperaments, com-
bined to allegorize the intellectual life. After finish-
ing this work, mural and decorative painting began
to hold Mr. Beck’s attention.
But decoration covers a wide field, ranging from
pictorial representations of an almost naturalistic
kind to compositions severely formal or reduced to
pattern in the abstract. Mr. Beck, in common with
many other artists, usually designed frames for his
own pictures, thinking that these should suit the
pictures framed, that when possible they should be
designed by the artist to correspond with the spirit
of his painting. It was in working out these ideas
that he began experiments with gesso as a satisfac-

tory medium for the production of picture borders.
In the Metropolitan Museum, of New York, are
important panels of the fifteenth century containing
religious subjects, of which the frame and the
picture show the treatment upon which Mr. Beck
based his own. In his paintings, largely of a semi-
religious and symbolical character, gilded gesso
used as borders, friezes, or portions of the picture
itself, became frequent. Finding gold on canvas
unstable, however, because of the expansion and
contraction of the linen, and feeling it to be un-
satisfactory in quality when so used, he adopted the
wooden panel, after the fashion of the masters.
Probably the most characteristic gesso work in
the series of paintings referred to above is the un-
finished panel showing the portrait of Ulysses S.
Grant. This panel is a decorative portrait of the
general. The center medallion is on a dark blue
ground and the dates on either side on the same
dark blue. The laurel around the medallion is in
gold, as well as the motto, Let Us Have Peace, the
name and the dates. A gesso background, covered
with gilded wings in high relief, shows here and
there, and gilded gesso, representing wings, is visi-
ble just inside the medallion. The angels of Peace
and Victory bear palm branches. An interesting
color effect is produced by the use of two shades of
gold in the laurel wreath and the wings around the
portrait. The scheme is simple; all the field occu-
pied by the angels is treated broadly in white, and
all the relief forms are gilded.