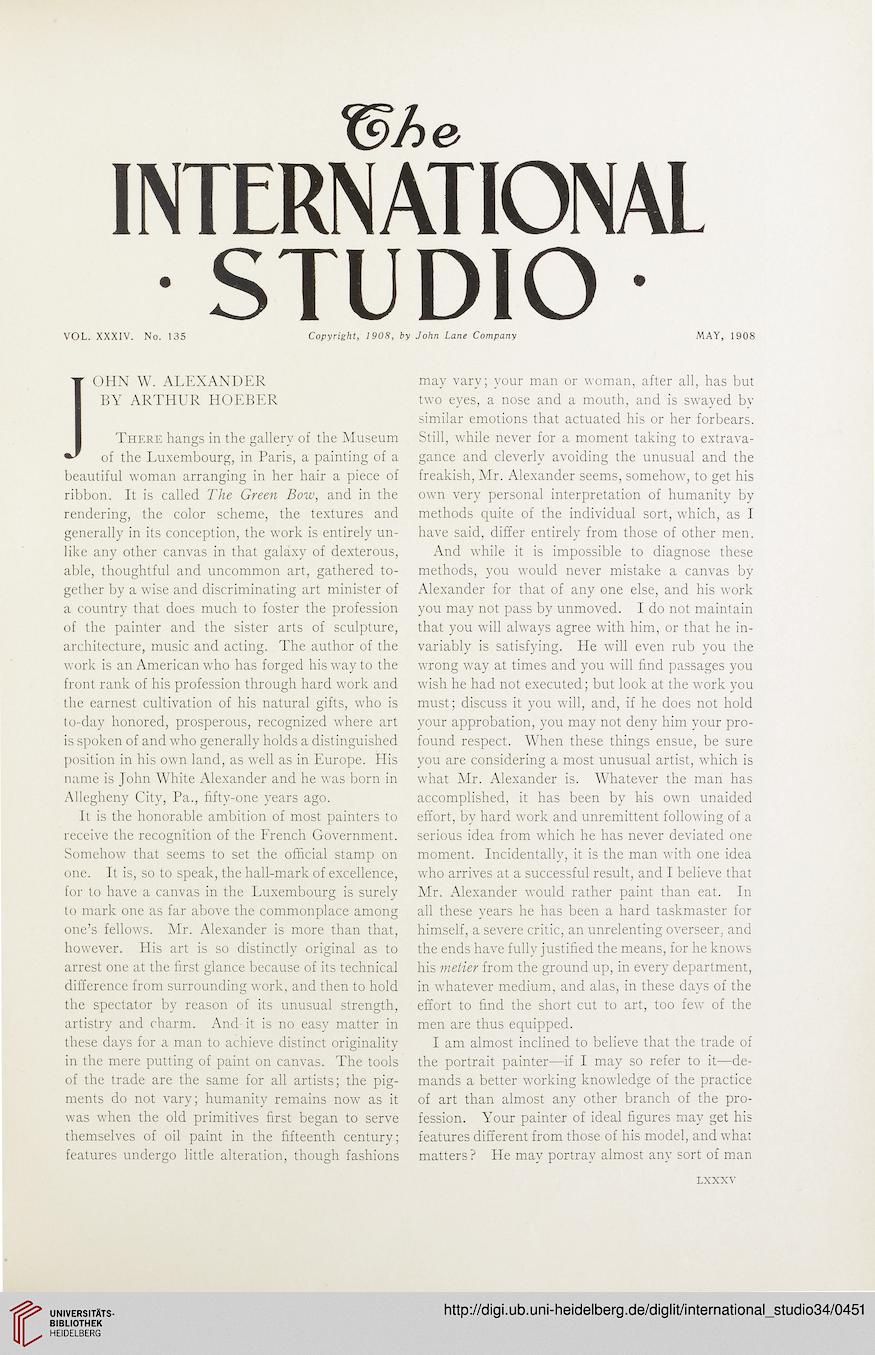 JOHN W. ALEXANDER
BY ARTHUR HOEBER
There hangs in the gallery of the Museum
of the Luxembourg, in Paris, a painting of a
beautiful woman arranging in her hair a piece of
ribbon. It is called The Green Bow, and in the
rendering, the color scheme, the textures and
generally in its conception, the work is entirely un-
like any other canvas in that galaxy of dexterous,
able, thoughtful and uncommon art, gathered to-
gether by a wise and discriminating art minister of
a country that does much to foster the profession
of the painter and the sister arts of sculpture,
architecture, music and acting. The author of the
work is an American who has forged his way to the
front rank of his profession through hard work and
the earnest cultivation of his natural gifts, who is
to-day honored, prosperous, recognized where art
is spoken of and who generally holds a distinguished
position in his own land, as well as in Europe. His
name is John White Alexander and he was born in
Allegheny City, Pa., fifty-one years ago.
It is the honorable ambition of most painters to
receive the recognition of the French Government.
Somehow that seems to set the official stamp on
one. It is, so to speak, the hall-mark of excellence,
for to have a canvas in the Luxembourg is surely
to mark one as far above the commonplace among
one’s fellows. Mr. Alexander is more than that,
however. His art is so distinctly original as to
arrest one at the first glance because of its technical
difference from surrounding work, and then to hold
the spectator by reason of its unusual strength,
artistry and charm. And it is no easy matter in
these days for a man to achieve distinct originality
in the mere putting of paint on canvas. The tools
of the trade are the same for all artists; the pig-
ments do not vary; humanity remains now as it
was when the old primitives first began to serve
themselves of oil paint in the fifteenth century;
features undergo little alteration, though fashions

may vary; your man or woman, after all, has but
two eyes, a nose and a mouth, and is swrayed bv
similar emotions that actuated his or her forbears.
Still, while never for a moment taking to extrava-
gance and cleverly avoiding the unusual and the
freakish, Mr. Alexander seems, somehow, to get his
own very personal interpretation of humanity by
methods quite of the individual sort, which, as I
have said, differ entirely from those of other men.
And while it is impossible to diagnose these
methods, you would never mistake a canvas by
Alexander for that of any one else, and his work
you may not pass by unmoved. I do not maintain
that you will always agree with him, or that he in-
variably is satisfying. He will even rub you the
wrong way at times and you will find passages you
wish he had not executed; but look at the work you
must; discuss it you will, and, if he does not hold
your approbation, you may not deny him your pro-
found respect. When these things ensue, be sure
you are considering a most unusual artist, which is
what Mr. Alexander is. Whatever the man has
accomplished, it has been by his own unaided
effort, by hard work and unremittent following of a
serious idea from which he has never deviated one
moment. Incidentally, it is the man with one idea
who arrives at a successful result, and I believe that
Mr. Alexander would rather paint than eat. In
all these years he has been a hard taskmaster for
himself, a severe critic, an unrelenting overseer, and
the ends have fully justified the means, for he knows
his metier from the ground up, in every department,
in whatever medium, and alas, in these days of the
effort to find the short cut to art, too few of the
men are thus equipped.
I am almost inclined to believe that the trade of
the portrait painter—if I may so refer to it—de-
mands a better working knowledge of the practice
of art than almost any other branch of the pro-
fession. Your painter of ideal figures may get his
features different from those of his model, and what
matters ? He may portray almost any sort of man