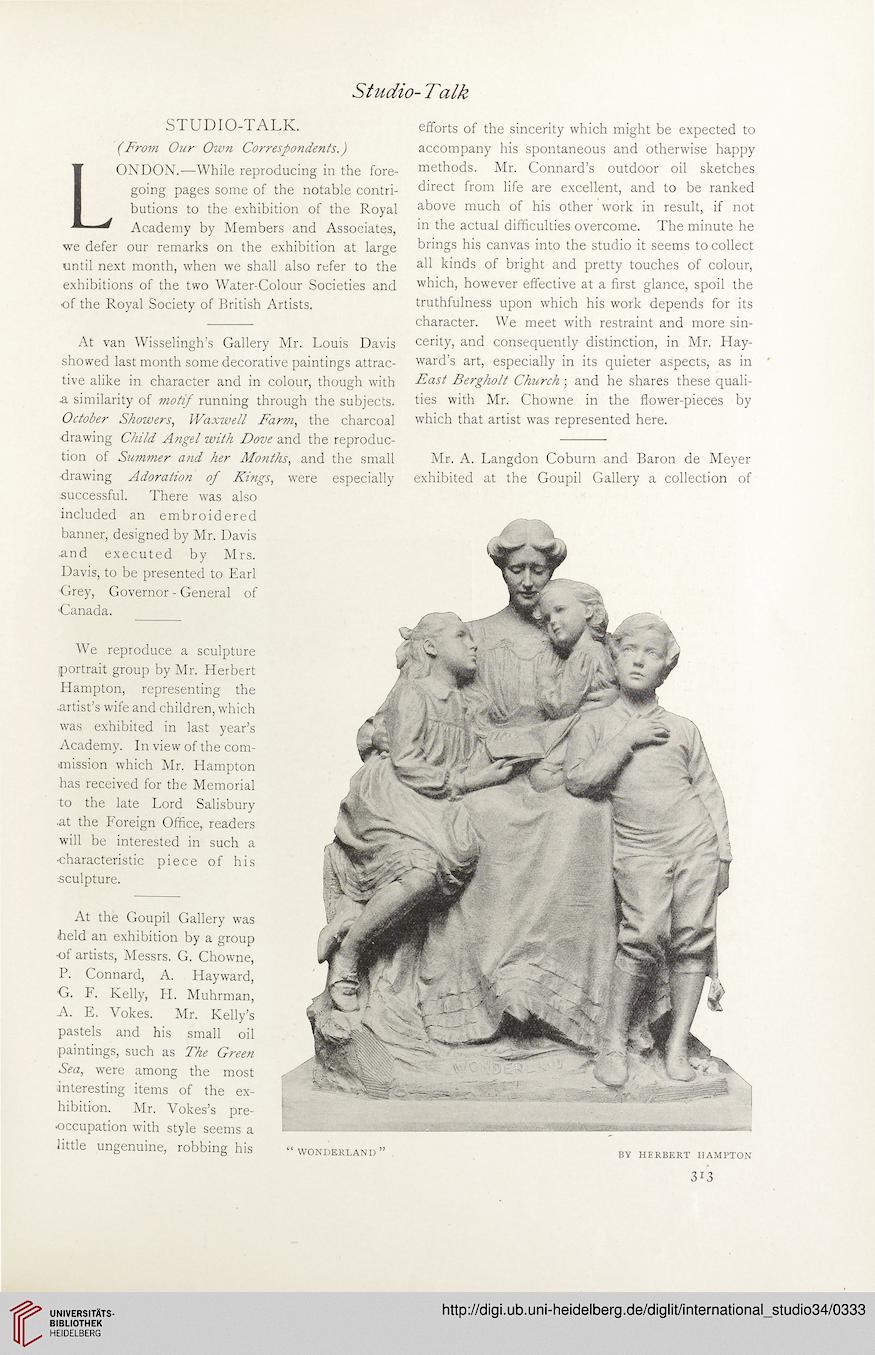 STUDIO-TALK.
(From Our Own Correspondents.)
ONDON.—While reproducing in the fore-
going pages some of the notable contri-
butions to the exhibition of the Royal
Academy by Members and Associates,
we defer our remarks on the exhibition at large
until next month, when we shall also refer to the
exhibitions of the two Water-Colour Societies and
•of the Royal Society of British Artists.

At van Wisselingh’s Gallery Mr. Louis Davis
showed last month some decorative paintings attrac-
tive alike in character and in colour, though with
•a similarity of motif running through the subjects.
October Showers, Waxwell Farm, the charcoal
•drawing Child Angel with Dove and the reproduc-
tion of Summer and her Months, and the small
drawing Adoration of Kings, were especially
successful. There was also
included an embroidered
banner, designed by Mr. Davis
and executed by Mrs.
Davis, to be presented to Earl
Grey, Governor - General of
•Canada.

We reproduce a sculpture
portrait group by Mr. Herbert
Hampton, representing the
.artist’s wife and children, which
was exhibited in last year’s
Academy. In view of the com-
mission which Mr. Hampton
has received for the Memorial
to the late Lord Salisbury
•at the Foreign Office, readers
will be interested in such a
•characteristic piece of his
sculpture.

efforts of the sincerity which might be expected to
accompany his spontaneous and otherwise happy
methods. Mr. Connard’s outdoor oil sketches
direct from life are excellent, and to be ranked
above much of his other work in result, if not
in the actual difficulties overcome. The minute he
brings his canvas into the studio it seems to collect
all kinds of bright and pretty touches of colour,
which, however effective at a first glance, spoil the
truthfulness upon which his work depends for its
character. We meet with restraint and more sin-
cerity, and consequently distinction, in Mr. Hay-
ward’s art, especially in its quieter aspects, as in
East Bergholt Church; and he shares these quali-
ties with Mr. Chowne in the flower-pieces by
which that artist was represented here.

Mr. A. Langdon Coburn and Baron de Meyer
exhibited at the Goupil Gallery a collection of


At the Goupil Gallery was
held an exhibition by a group
■of artists, Messrs. G. Chowne,
P. Connard, A. Hayward,
G. F. Kelly, FI. Muhrman,
A. E. Vokes. Mr. Kelly’s
pastels and his small oil
paintings, such as The Green
Sea, were among the most
interesting items of the ex-
hibition. Mr. Vokes’s pre-
occupation with style seems a
little ungenuine, robbing his