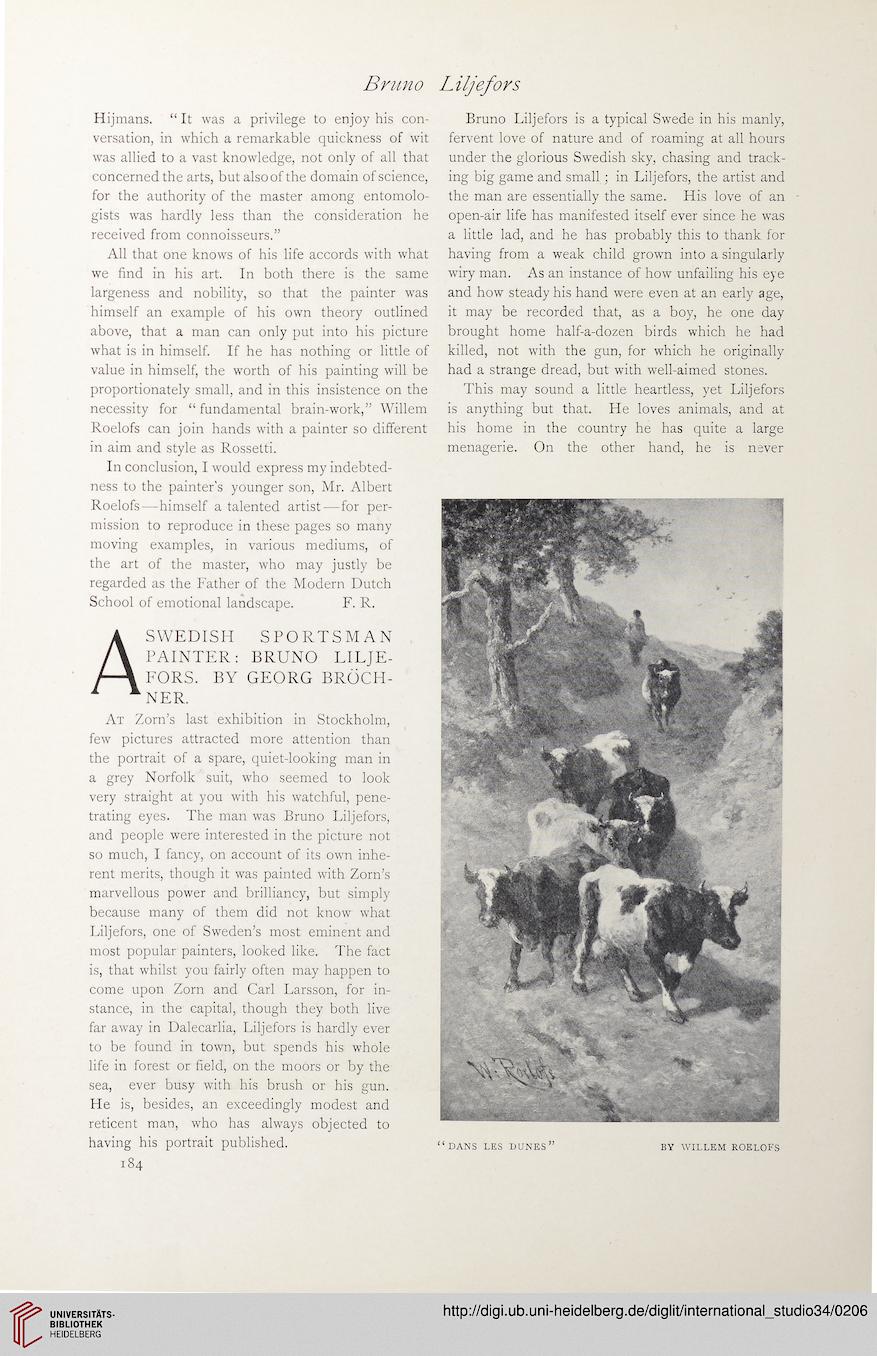 Information about OCR text
Bruno
Hijmans. “ It was a privilege to enjoy his con-
versation, in which a remarkable quickness of wit
was allied to a vast knowledge, not only of all that
concerned the arts, but also of the domain of science,
for the authority of the master among entomolo-
gists was hardly less than the consideration he
received from connoisseurs.”
All that one knows of his life accords with what
we find in his art. In both there is the same
largeness and nobility, so that the painter was
himself an example of his own theory outlined
above, that a man can only put into his picture
what is in himself. If he has nothing or little of
value in himself, the worth of his painting will be
proportionately small, and in this insistence on the
necessity for “fundamental brain-work,” Willem
Roelofs can join hands with a painter so different
in aim and style as Rossetti.
In conclusion, I would express my indebted-
ness to the painter’s younger son, Mr. Albert
Roelofs — himself a talented artist — for per-
mission to reproduce in these pages so many
moving examples, in various mediums, of
the art of the master, who may justly be
regarded as the Father of the Modern Dutch
School of emotional landscape. F. R.
A SWEDISH SPORTSMAN
PAINTER: BRUNO LILJE-
FORS. BY GEORG BROCH-
NER.
At Zorn’s last exhibition in Stockholm,
few pictures attracted more attention than
the portrait of a spare, quiet-looking man in
a grey Norfolk suit, who seemed to look
very straight at you with his watchful, pene-
trating eyes. The man was Bruno Liljefors,
and people were interested in the picture not
so much, I fancy, on account of its own inhe-
rent merits, though it was painted with Zorn’s
marvellous power and brilliancy, but simply
because many of them did not know what
Liljefors, one of Sweden’s most eminent and
most popular painters, looked like. The fact
is, that whilst you fairly often may happen to
come upon Zorn and Carl Larsson, for in-
stance, in the capital, though they both live
far away in Dalecarlia, Liljefors is hardly ever
to be found in town, but spends his whole
life in forest or field, on the moors or by the
sea, ever busy with his brush or his gun.
He is, besides, an exceedingly modest and
reticent man, who has always objected to
having his portrait published.
184

Liljefors
Bruno Liljefors is a typical Swede in his manly,
fervent love of nature and of roaming at all hours
under the glorious Swedish sky, chasing and track-
ing big game and small; in Liljefors, the artist and
the man are essentially the same. His love of an
open-air life has manifested itself ever since he was
a little lad, and he has probably this to thank for
having from a weak child grown into a singularly
wiry man. As an instance of how unfailing his eye
and how steady his hand were even at an early age,
it may be recorded that, as a boy, he one day
brought home half-a-dozen birds which he had
killed, not with the gun, for which he originally
had a strange dread, but with well-aimed stones.
This may sound a little heartless, yet Liljefors
is anything but that. He loves animals, and at
his home in the country he has quite a large
menagerie. On the other hand, he is never