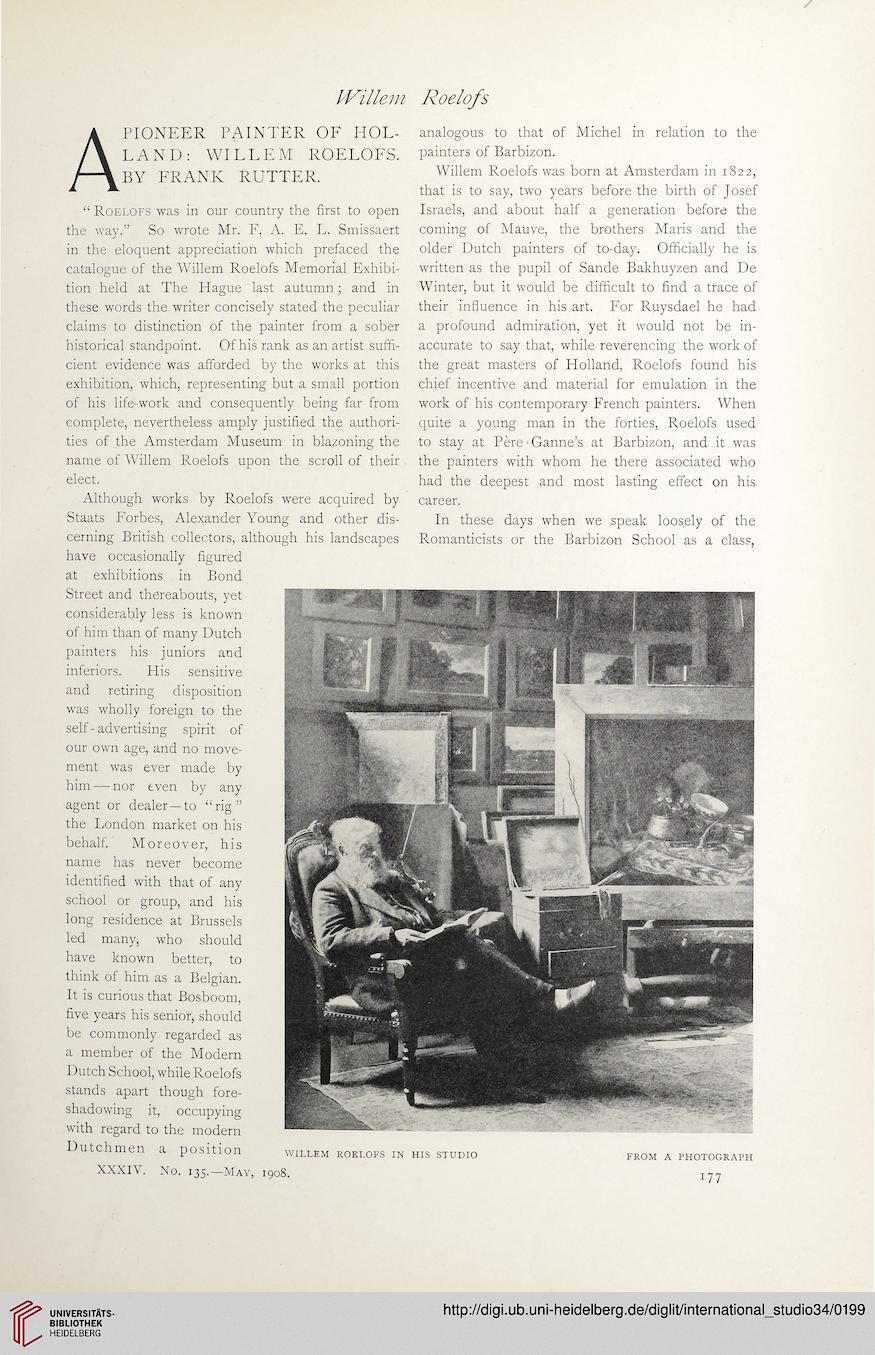 
A PIONEER PAINTER OF HOL-
LAND: WILLEM ROELOFS.
BY FRANK RUTTER.
“ Roelofs was in our country the first to open
the way.” So wrote Mr. F. A. E. L. Smissaert
in the eloquent appreciation which prefaced the
catalogue of the Willem Roelofs Memorial Exhibi-
tion held at The Hague last autumn; and in
these words the writer concisely stated the peculiar
claims to distinction of the painter from a sober
historical standpoint. Of his rank as an artist suffi-
cient evidence was afforded by the works at this
exhibition, which, representing but a small portion
of his life-work and consequently being far from
complete, nevertheless amply justified the authori-
ties of the Amsterdam Museum in blazoning the
name of Willem Roelofs upon the scroll of then-
elect.
Although works by Roelofs were acquired by
Staats Forbes, Alexander Young and other dis-
cerning British collectors, although his landscapes
have occasionally figured
at exhibitions in Bond
Street and thereabouts, yet
considerably less is known
of him than of many Dutch
painters his juniors and
inferiors. His sensitive
and retiring disposition
was wholly foreign to the
self-advertising spirit of
our own age, and no move-
ment was ever made by
him — nor even by any
agent or dealer—to “rig”
the London market on his
behalf. Moreover, his
name has never become
identified with that of any
school or group, and his
long residence at Brussels
led many, who should
have known better, to
think of him as a Belgian.
It is curious that Bosboom,
five years his senior, should
be commonly regarded as
a member of the Modern
Dutch School, while Roelofs
stands apart though fore-
shadowing it, occupying
with regard to the modern
Dutchmen a position

analogous to that of Michel in relation to the
painters of Barbizon.
Willem Roelofs was born at Amsterdam in 1822,
that is to say, two years before the birth of Josef
Israels, and about half a generation before the
coming of Mauve, the brothers Maris and the
older Dutch painters of to-day. Officially he is
written as the pupil of Sande Bakhuyzen and De
Winter, but it would be difficult to find a trace of
their influence in his art. For Ruysdael he had
a profound admiration, yet it would not be in-
accurate to say that, while reverencing the work of
the great masters of Holland, Roelofs found his
chief incentive and material for emulation in the
work of his contemporary French painters. When
quite a young man in the forties, Roelofs used
to stay at Pere Ganne’s at Barbizon, and it was
the painters with whom he there associated who
had the deepest and most lasting effect on his
career.
In these days when we speak loosely of the
Romanticists or the Barbizon School as a class,

WILLEM ROELOFS IN HIS STUDIO