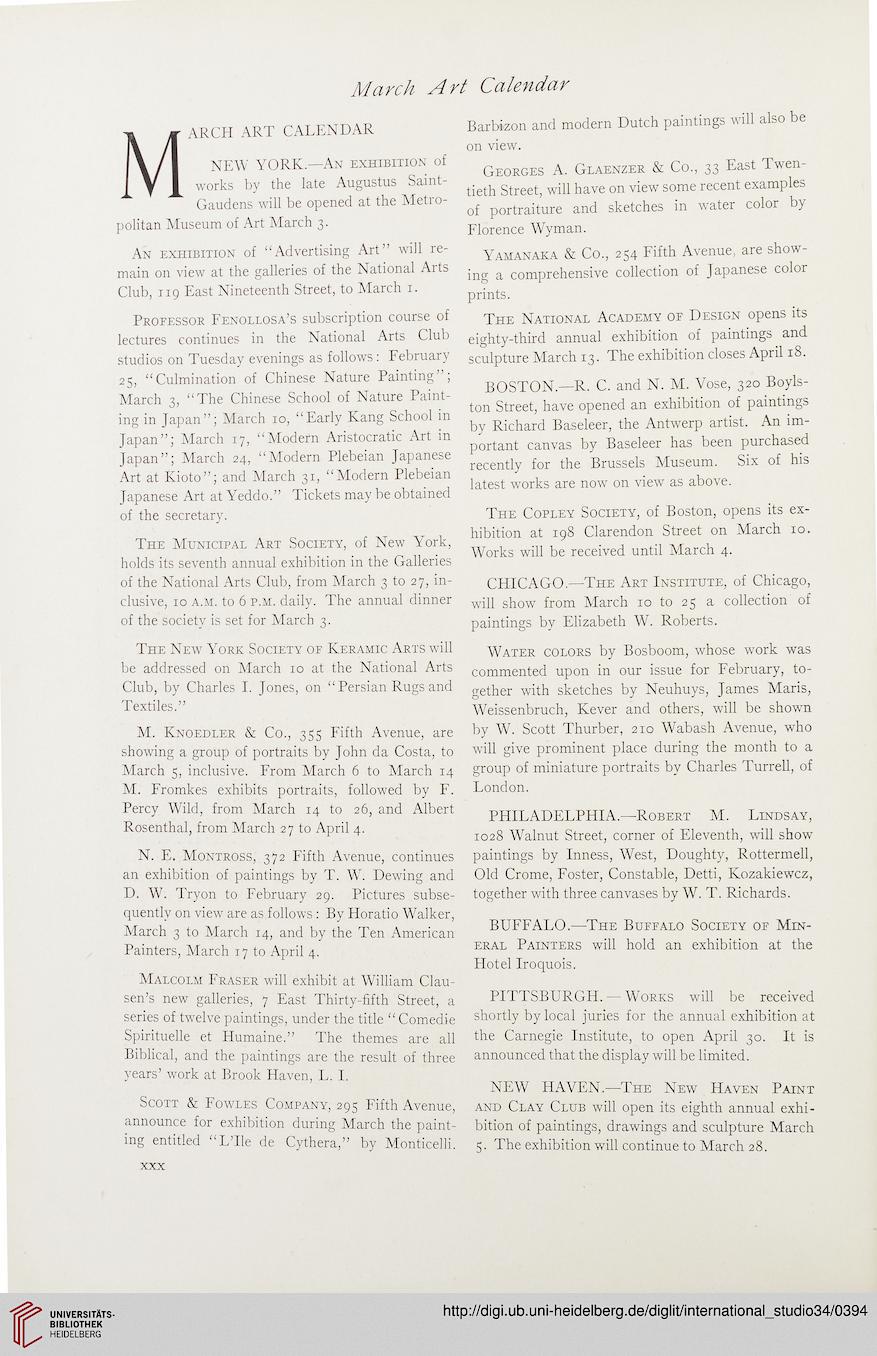 ARCH ART CALENDAR
NEW YORK.—An exhibition of
works by the late Augustus Saint-
Gaudens will be opened at the Metro-
politan Museum of Art March 3.
An exhibition of “Advertising Art” will re-
main on view at the galleries of the National Arts
Club, 119 East Nineteenth Street, to March 1.
Professor Fenollosa’s subscription course of
lectures continues in the National Arts Club
studios on Tuesday evenings as follows: February
25, “Culmination of Chinese Nature Painting”;
March 3, “The Chinese School of Nature Paint-
ing in Japan”; March 10, “Early Kang School in
Japan”; March 17, “Modern Aristocratic Art in
Japan”; March 24, “Modern Plebeian Japanese
Art at Kioto”; and March 31, “Modern Plebeian
Japanese Art at Yeddo.” Tickets may be obtained
of the secretary.
The Municipal Art Society, of New York,
holds its seventh annual exhibition in the Galleries
of the National Arts Club, from March 3 to 27, in-
clusive, 10 a.m. to 6 p.m. daily. The annual dinner
of the society is set for March 3.
The New York Society of Keramic Arts will
be addressed on March 10 at the National Arts
Club, by Charles I. Jones, on “ Persian Rugs and
Textiles.”
M. Knoedler & Co., 355 Fifth Avenue, are
showing a group of portraits by John da Costa, to
March 5, inclusive. From March 6 to March 14
M. Fromkes exhibits portraits, followed by F.
Percy Wild, from March 14 to 26, and Albert
Rosenthal, from March 27 to April 4.
N. E. Montross, 372 Fifth Avenue, continues
an exhibition of paintings by T. W. Dewing and
D. W. Tryon to February 29. Pictures subse-
quently on view are as follows: By Horatio Walker,
March 3 to March 14, and by the Ten American
Painters, March 17 to April 4.
Malcolm Fraser will exhibit at William Clau-
sen’s new galleries, 7 East Thirty-fifth Street, a
series of twelve paintings, under the title “ Comedie
Spirituelle et Humaine.” The themes are all
Biblical, and the paintings are the result of three
years’ work at Brook Haven, L. I.
Scott & Fowles Company, 295 Fifth Avenue,
announce for exhibition during March the paint-
ing entitled “L’Ue de Cythera,” by Monticelli.

on view.
Georges A. Glaenzer & Co., 33 East Twen-
tieth Street, will have on view some recent examples
of portraiture and sketches in water color by
Florence Wyman.
Yamanaka & Co., 254 Fifth Avenue, are show-
ing a comprehensive collection of Japanese color
prints.
The National Academy of Design opens its
eighty-third annual exhibition of paintings and
sculpture March 13. The exhibition closes April 18.
BOSTON—R. C. and N. M. Vose, 320 Boyls-
ton Street, have opened an exhibition of paintings
by Richard Baseleer, the Antwerp artist. An im-
portant canvas by Baseleer has been purchased
recently for the Brussels Museum. Six of his
latest works are now on view as above.
The Copley Society, of Boston, opens its ex-
hibition at 198 Clarendon Street on March 10.
Works will be received until March 4.
CHICAGO,—The Art Institute, of Chicago,
will show from March 10 to 25 a collection of
paintings by Elizabeth W. Roberts.
Water colors by Bosboom, whose work was
commented upon in our issue for February, to-
gether with sketches by Neuhuys, James Maris,
Weissenbruch, Kever and others, will be shown
by W. Scott Thurber, 210 Wabash Avenue, who
will give prominent place during the month to a
group of miniature portraits by Charles Turrell, of
London.
PHILADELPHIA.—-Robert M. Lindsay,
1028 Walnut Street, corner of Eleventh, will show
paintings by Inness, West, Doughty, Rottermell,
Old Crome, Foster, Constable, Detti, Kozakiewcz,
together with three canvases by W. T. Richards.
BUFFALO.—The Buffalo Society of Min-
eral Painters will hold an exhibition at the
Hotel Iroquois.
PITTSBURGH. — Works will be received
shortly by local juries for the annual exhibition at
the Carnegie Institute, to open April 30. It is
announced that the display will be limited.
NEW HAVEN.—The New Haven Paint
and Clay Club will open its eighth annual exhi-
bition of paintings, drawings and sculpture March
5. The exhibition will continue to March 28.