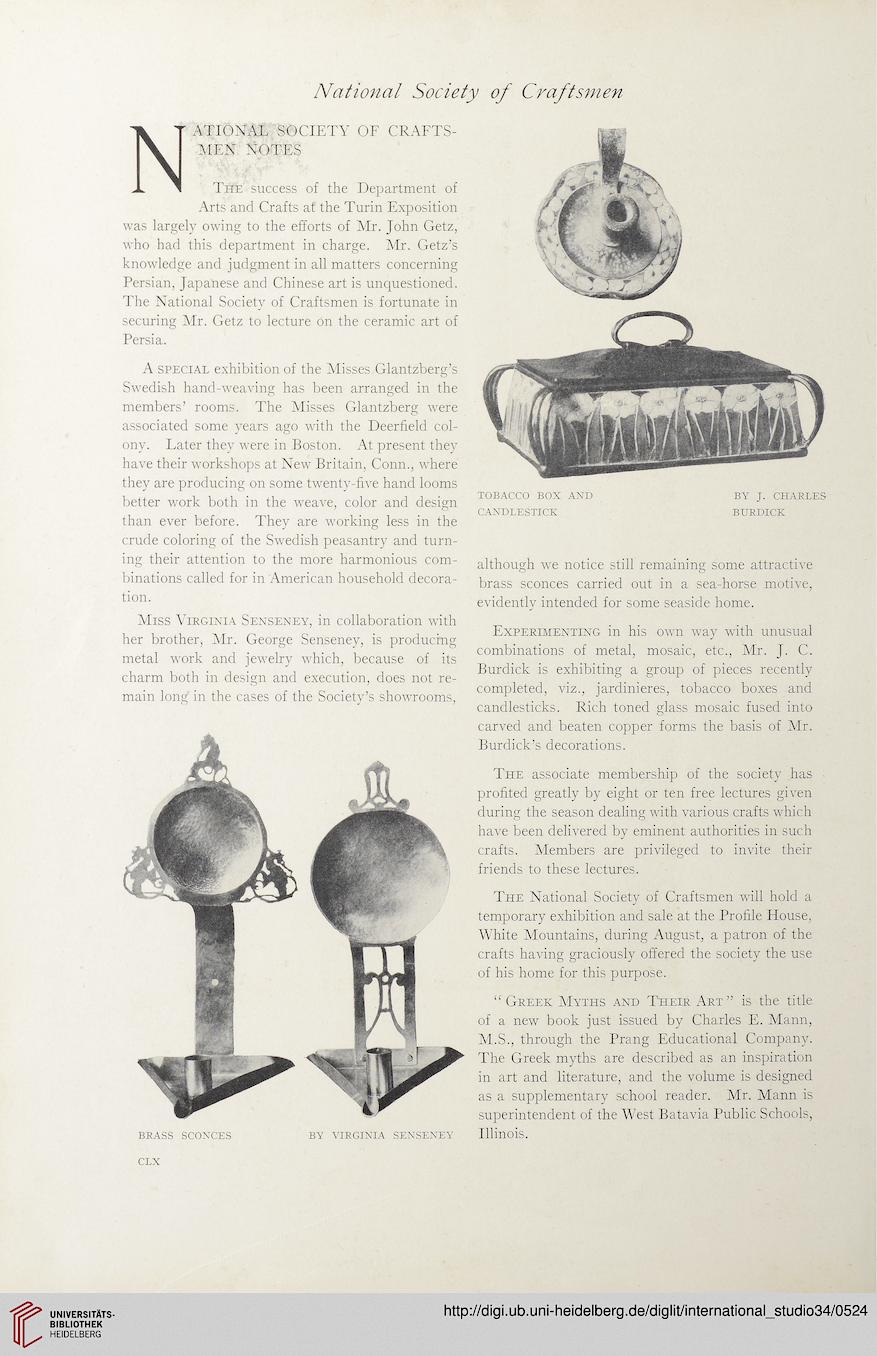 The success of the Department of
Arts and Crafts at the Turin Exposition
was largely owing to the efforts of Mr. John Getz,
who had this department in charge. Mr. Getz’s
knowledge and judgment in all matters concerning
Persian, Japanese and Chinese art is unquestioned.
The National Society of Craftsmen is fortunate in
securing Mr. Getz to lecture on the ceramic art of
Persia.

A special exhibition of the Misses Glantzberg’s
Swedish hand-weaving has been arranged in the
members’ rooms. The Misses Glantzberg were
associated some years ago with the Deerfield col-
ony. Later they were in Boston. At present they
have their workshops at New Britain, Conn., where
they are producing on some twenty-five hand looms
better work both in the weave, color and design
than ever before. They are working less in the
crude coloring of the Swedish peasantry and turn-
ing their attention to the more harmonious com-
binations called for in American household decora-
tion.
Miss Virginia Senseney, in collaboration with
her brother, Mr. George Senseney, is producing
metal work and jewelry which, because of its
charm both in design and execution, does not re-
main long in the cases of the Society’s showrooms,

although we notice still remaining some attractive
brass sconces carried out in a sea-horse motive,
evidently intended for some seaside home.
Experimenting in his own way with unusual
combinations of metal, mosaic, etc., Mr. J. C.
Burdick is exhibiting a group of pieces recently
completed, viz., jardinieres, tobacco boxes and
candlesticks. Rich toned glass mosaic fused into
carved and beaten copper forms the basis of Mr.
Burdick’s decorations.
The associate membership of the society has
profited greatly by eight or ten free lectures given
during the season dealing with various crafts which
have been delivered by eminent authorities in such
crafts. Members are privileged to invite their
friends to these lectures.
The National Society of Craftsmen will hold a
temporary exhibition and sale at the Profile House,
White Mountains, during August, a patron of the
crafts having graciously offered the society the use
of his home for this purpose.
“ Greek Myths and Their Art” is the title
of a new book just issued by Charles E. Mann,
M.S., through the Prang Educational Company.
The Greek myths are described as an inspiration
in art and literature, and the volume is designed
as a supplementary school reader. Mr. Mann is
superintendent of the West Batavia Public Schools,
Illinois.