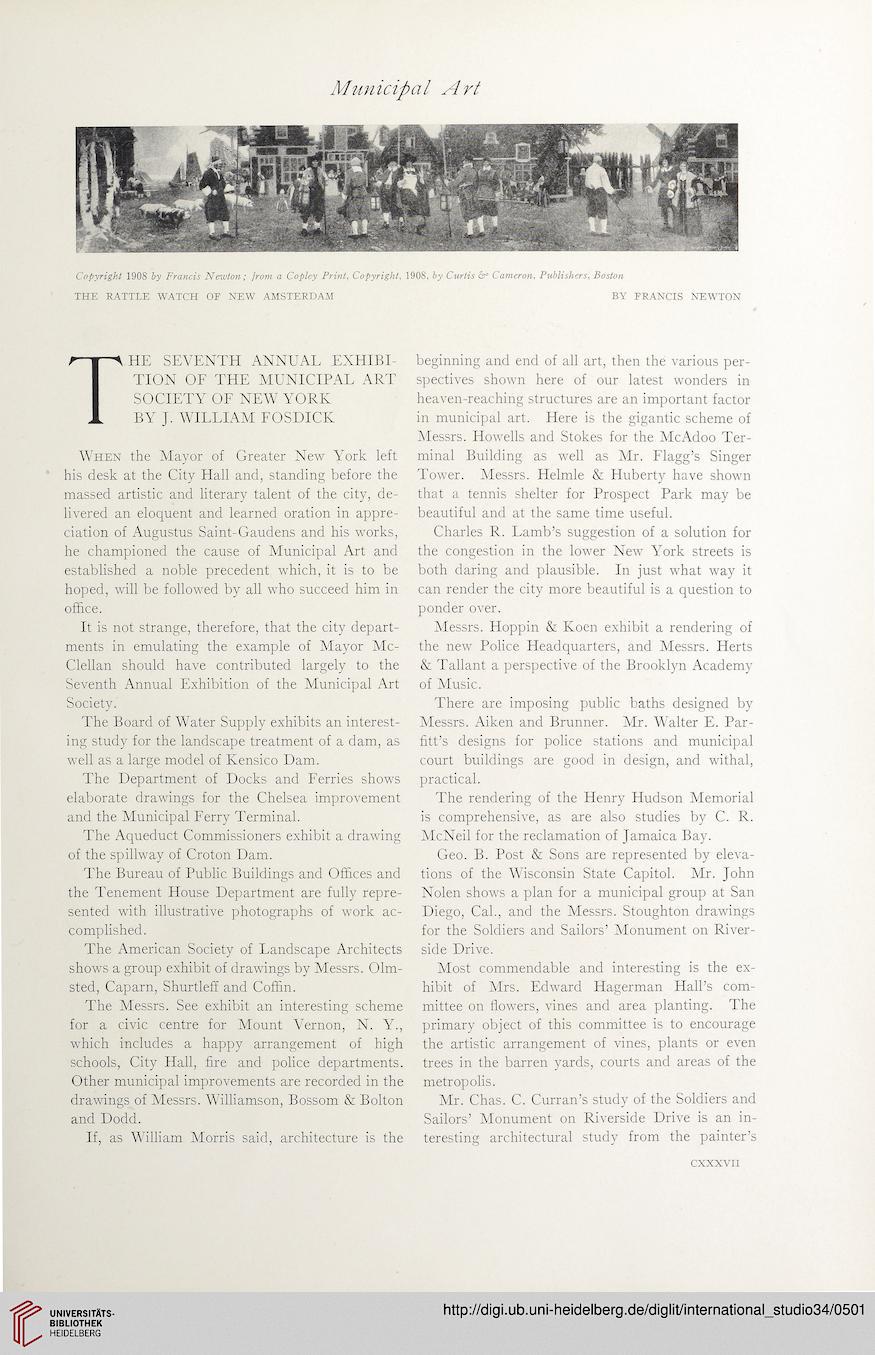 The seventh annual exhibi-
tion OF THE MUNICIPAL ART
SOCIETY OF NEW YORK
BY J. WILLIAM FOSDICK
When the Mayor of Greater New York left
his desk at the City Hall and, standing before the
massed artistic and literary talent of the city, de-
livered an eloquent and learned oration in appre-
ciation of Augustus Saint-Gaudens and his works,
he championed the cause of Municipal Art and
established a noble precedent which, it is to be
hoped, will be followed by all who succeed him in
office.
It is not strange, therefore, that the city depart-
ments in emulating the example of Mayor Mc-
Clellan should have contributed largely to the
Seventh Annual Exhibition of the Municipal Art
Society.
The Board of Water Supply exhibits an interest-
ing study for the landscape treatment of a dam, as
well as a large model of Kensico Dam.
The Department of Docks and Ferries shows
elaborate drawings for the Chelsea improvement
and the Municipal Ferry Terminal.
The Aqueduct Commissioners exhibit a drawing
of the spillway of Croton Dam.
The Bureau of Public Buildings and Offices and
the Tenement House Department are fully repre-
sented with illustrative photographs of work ac-
complished.
The American Society of Landscape Architects
shows a group exhibit of drawings by Messrs. Olm-
sted, Caparn, Shurtleff and Coffin.
The Messrs. See exhibit an interesting scheme
for a civic centre for Mount Vernon, N. Y.,
which includes a happy arrangement of high
schools, City Hall, fire and police departments.
Other municipal improvements are recorded in the
drawings of Messrs. Williamson, Bossom & Bolton
and Dodd.
If, as William Morris said, architecture is the

beginning and end of all art, then the various per-
spectives shown here of our latest wonders in
heaven-reaching structures are an important factor
in municipal art. Here is the gigantic scheme of
Messrs. Howells and Stokes for the McAdoo Ter-
minal Building as well as Mr. Flagg’s Singer
Tower. Messrs. Helmle & Huberty have shown
that a tennis shelter for Prospect Park may be
beautiful and at the same time useful.
Charles R. Lamb’s suggestion of a solution for
the congestion in the lower New York streets is
both daring and plausible. In just what way it
can render the city more beautiful is a question to
ponder over.
Messrs. Hoppin & Koen exhibit a rendering of
the new Police Headquarters, and Messrs. Herts
& Tallant a perspective of the Brooklyn Academy
of Music.
There are imposing public baths designed by
Messrs. Aiken and Brunner. Air. Walter E. Par-
fitt’s designs for police stations and municipal
court buildings are good in design, and withal,
practical.
The rendering of the Henry Hudson Memorial
is comprehensive, as are also studies by C. R.
McNeil for the reclamation of Jamaica Bay.
Geo. B. Post & Sons are represented by eleva-
tions of the Wisconsin State Capitol. Mr. John
Nolen shows a plan for a municipal group at San
Diego, Cal., and the Messrs. Stoughton drawings
for the Soldiers and Sailors’ Monument on River-
side Drive.
Most commendable and interesting is the ex-
hibit of Mrs. Edward Hagerman Hall’s com-
mittee on flowers, vines and area planting. The
primary object of this committee is to encourage
the artistic arrangement of vines, plants or even
trees in the barren yards, courts and areas of the
metropolis.
Mr. Chas. C. Curran’s study of the Soldiers and
Sailors’ Monument on Riverside Drive is an in-
teresting architectural study from the painter’s