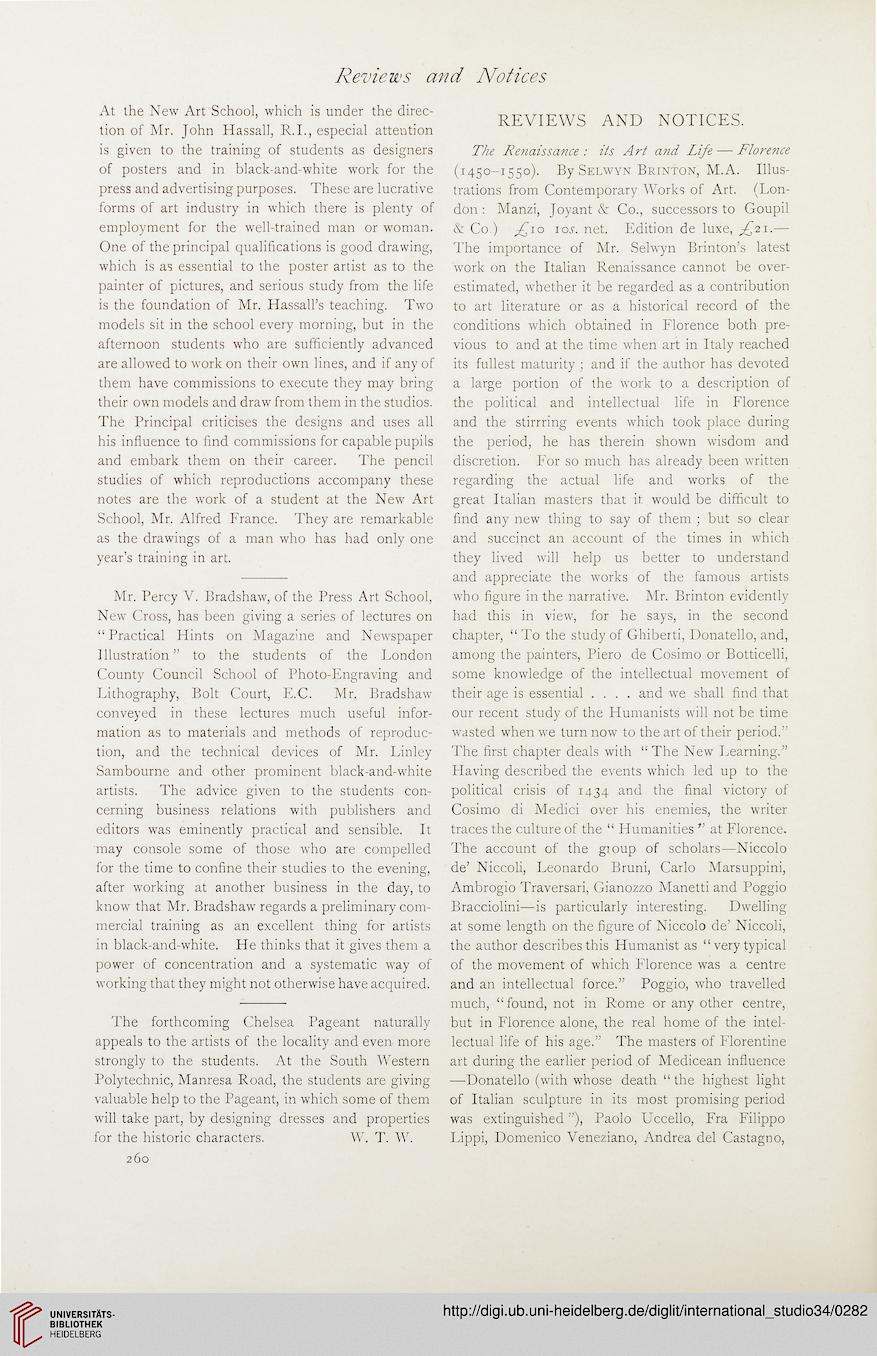 At the New Art School, which is under the direc-
tion of Mr. John Hassall, R.I., especial attention
is given to the training of students as designers
of posters and in black-and-white work for the
press and advertising purposes. These are lucrative
forms of art industry in which there is plenty of
employment for the well-trained man or woman.
One of the principal qualifications is good drawing,
which is as essential to the poster artist as to the
painter of pictures, and serious study from the life
is the foundation of Mr. Hassall’s teaching. Two
models sit in the school every morning, but in the
afternoon students who are sufficiently advanced
are allowed to work on their own lines, and if any of
them have commissions to execute they may bring
their own models and draw from them in the studios.
The Principal criticises the designs and uses all
his influence to find commissions for capable pupils
and embark them on their career. The pencil
studies of which reproductions accompany these
notes are the work of a student at the New Art
School, Mr. Alfred France. They are remarkable
as the drawings of a man who has had only one
year’s training in art.

Mr. Percy V. Bradshaw, of the Press Art School,
New Cross, has been giving a series of lectures on
“Practical Hints on Magazine and Newspaper
Illustration” to the students of the London
County Council School of Photo-Engraving and
Lithography, Bolt Court, E.C. Mr. Bradshaw
conveyed in these lectures much useful infor-
mation as to materials and methods of reproduc-
tion, and the technical devices of Mr. Linley
Sambourne and other prominent black-and-white
artists. The advice given to the students con-
cerning business relations with publishers and
editors was eminently practical and sensible. It
may console some of those who are compelled
for the time to confine their studies to the evening,
after working at another business in the day, to
know that Mr. Bradshaw regards a preliminary com-
mercial training as an excellent thing for artists
in black-and-white. He thinks that it gives them a
power of concentration and a systematic way of
working that they might not otherwise have acquired.

The forthcoming Chelsea Pageant naturally
appeals to the artists of the locality and even more
strongly to the students. At the South Western
Polytechnic, Manresa Road, the students are giving
valuable help to the Pageant, in which some of them
will take part, by designing dresses and properties
for the historic characters. W. T. W.

REVIEWS AND NOTICES.
The Re?iaissance : its Art and Life — Florence
(1450-1550). By Selwyn Brinton, M.A. Illus-
trations from Contemporary Works of Art. (Lon-
don : Manzi, Joyant & Co., successors to Goupil
& Co.) IO-5'- net. Edition de luxe, ^21.—-
The importance of Mr. Selwyn Brinton’s latest
work on the Italian Renaissance cannot be over-
estimated, whether it be regarded as a contribution
to art literature or as a historical record of the
conditions which obtained in Florence both pre-
vious to and at the time when art in Italy reached
its fullest maturity ; and if the author has devoted
a large portion of the work to a description of
the political and intellectual life in Florence
and the stirrring events which took place during
the period, he has therein shown wisdom and
discretion. For so much has already been written
regarding the actual life and works of the
great Italian masters that it would be difficult to
find any new thing to say of them ; but so clear
and succinct an account of the times in which
they lived will help us better to understand
and appreciate the works of the famous artists
who figure in the narrative. Mr. Brinton evidently
had this in view, for he says, in the second
chapter, “ To the study of Ghiberti, Donatello, and,
among the painters, Piero de Cosimo or Botticelli,
some knowledge of the intellectual movement of
their age is essential .... and we shall find that
our recent study of the Humanists will not be time
wasted when we turn now to the art of their period.”
The first chapter deals with “The New Learning.”
Plaving described the events which led up to the
political crisis of 1434 and the final victory of
Cosimo di Medici over his enemies, the writer
traces the culture of the “ Humanities ” at Florence.
The account of the gioup of scholars—Niccolo
de’ Niccoli, Leonardo Bruni, Carlo Marsuppini,
Ambrogio Traversari, Gianozzo Manetti and Poggio
Bracciolini—is particularly interesting. Dwelling
at some length on the figure of Niccolo de’ Niccoli,
the author describes this Humanist as “very typical
of the movement of which Florence was a centre
and an intellectual force.” Poggio, who travelled
much, “found, not in Rome or any other centre,
but in Florence alone, the real home of the intel-
lectual life of his age.” The masters of Florentine
art during the earlier period of Medicean influence
■—-Donatello (with whose death “ the highest light
of Italian sculpture in its most promising period
was extinguished ”), Paolo Uccello, Fra Filippo
Lippi, Domenico Veneziano, Andrea del Castagno,