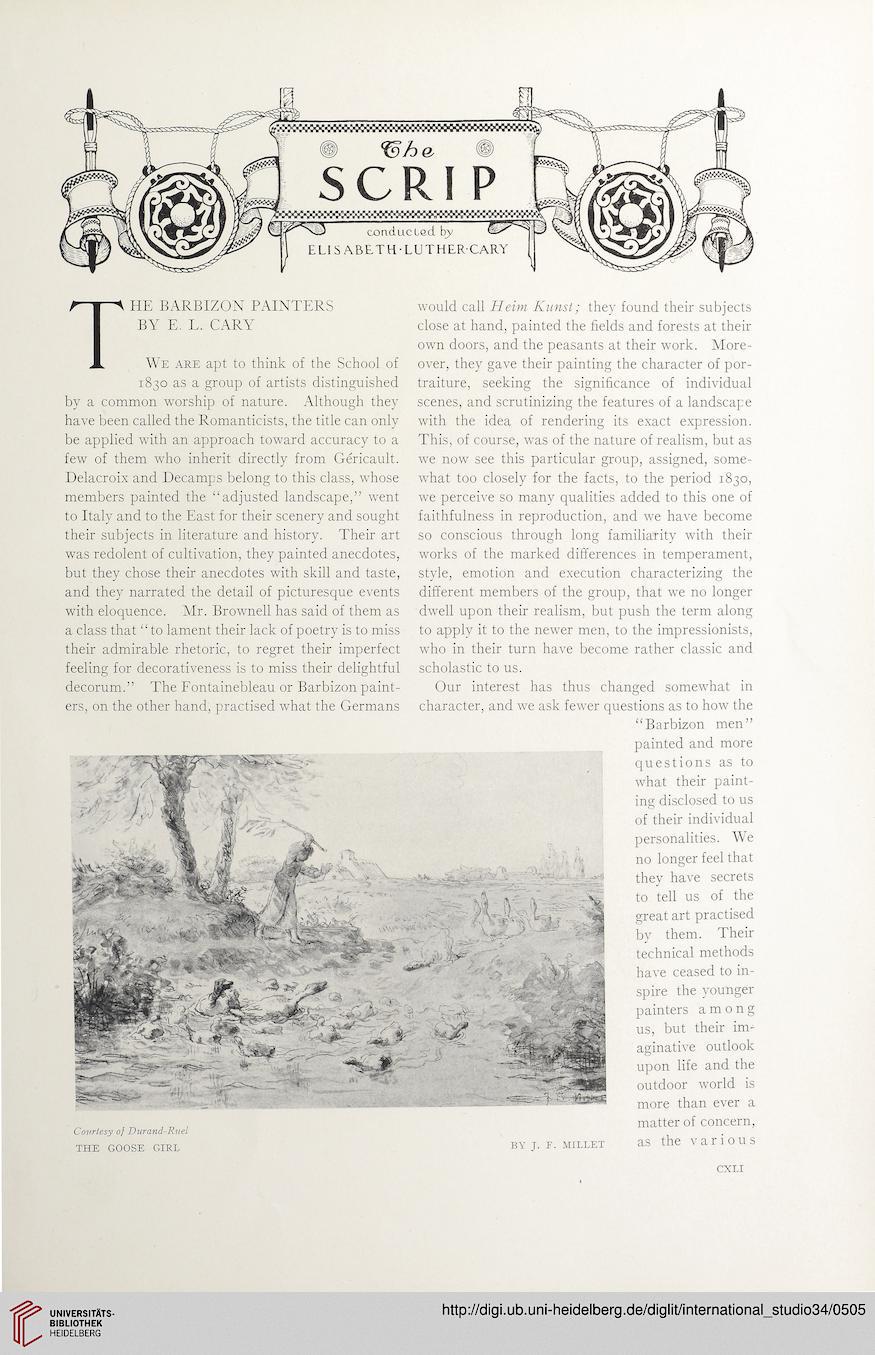 We are apt to think of the School of
1830 as a group of artists distinguished
by a common worship of nature. Although they
have been called the Romanticists, the title can only
be applied with an approach toward accuracy to a
few of them who inherit directly from Gericault.
Delacroix and Decamps belong to this class, whose
members painted the “adjusted landscape,” went
to Italy and to the East for their scenery and sought
their subjects in literature and history. Their art
was redolent of cultivation, they painted anecdotes,
but they chose their anecdotes with skill and taste,
and they narrated the detail of picturesque events
with eloquence. Air. Brownell has said of them as
a class that “to lament their lack of poetry is to miss
their admirable rhetoric, to regret their imperfect
feeling for decorativeness is to miss their delightful
decorum.” The Fontainebleau or Barbizon paint-
ers, on the other hand, practised what the Germans

would call Heim Kunst; they found their subjects
close at hand, painted the fields and forests at their
own doors, and the peasants at their work. Alore-
over, they gave their painting the character of por-
traiture, seeking the significance of individual
scenes, and scrutinizing the features of a landscape
with the idea of rendering its exact expression.
This, of course, was of the nature of realism, but as
we now see this particular group, assigned, some-
what too closely for the facts, to the period 1830,
we perceive so many qualities added to this one of
faithfulness in reproduction, and we have become
so conscious through long familiarity with their
works of the marked differences in temperament,
style, emotion and execution characterizing the
different members of the group, that we no longer
dwell upon their realism, but push the term along
to apply it to the newer men, to the impressionists,
who in their turn have become rather classic and
scholastic to us.
Our interest has thus changed somewhat in
character, and we ask fewer questions as to how the
“Barbizon men”
painted and more
questions as to
what their paint-
ing disclosed to us
of their individual
personalities. We
no longer feel that
they have secrets
to tell us of the
great art practised
by them. Their
technical methods
have ceased to in-
spire the younger
painters among
us, but their im-
aginative outlook
upon life and the
outdoor world is
more than ever a
matter of concern,
as the various