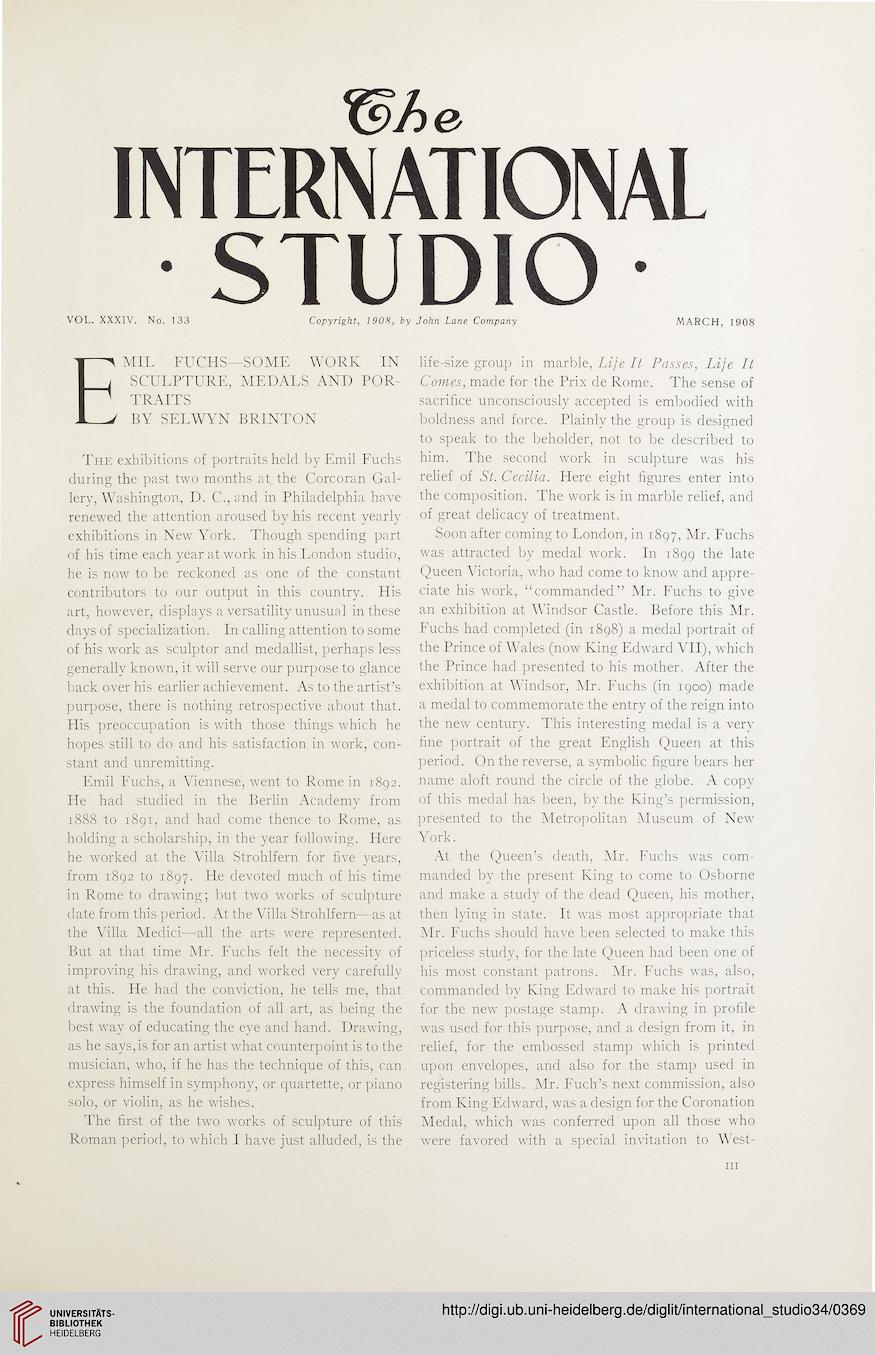 Emil fuchs—some work in
SCULPTURE, MEDALS AND POR-
TRAITS
BY SELWYN BRINTON
The exhibitions of portraits held by Emil Fuchs
during the past two months at the Corcoran Gal-
lery, Washington, D. C.,and in Philadelphia have
renewed the attention aroused by his recent yearly
exhibitions in New York. Though spending part
of his time each year at work in his London studio,
he is now to be reckoned as one of the constant
contributors to our output in this country. His
art, however, displays a versatility unusual in these
days of specialization. In calling attention to some
of his work as sculptor and medallist, perhaps less
generally known, it will serve our purpose to glance
back over his earlier achievement. As to the artist’s
purpose, there is nothing retrospective about that.
His preoccupation is with those things which he
hopes still to do and his satisfaction in work, con-
stant and unremitting.
Emil Fuchs, a Viennese, went to Rome in 1892.
He had studied in the Berlin Academy from
1888 to 1891, and had come thence to Rome, as
holding a scholarship, in the year following. Here
he worked at the Villa Strohlfern for five years,
from 1892 to 1897. He devoted much of his time
in Rome to drawing; but two works of sculpture
date from this period. At the Villa Strohlfern—as at
the Villa Medici—all the arts were represented.
But at that time Mr. Fuchs felt the necessity of
improving his drawing, and worked very carefully
at this. He had the conviction, he tells me, that
drawing is the foundation of all art, as being the
best way of educating the eye and hand. Drawing,
as he says, is for an artist what counterpoint is to the
musician, who, if he has the technique of this, can
express himself in symphony, or quartette, or piano
solo, or violin, as he wishes.
The first of the two works of sculpture of this
Roman period, to which I have just alluded, is the

life-size group in marble, Life It Passes, Life It
Comes, made for the Prix de Rome. The sense of
sacrifice unconsciously accepted is embodied with
boldness and force. Plainly the group is designed
to speak to the beholder, not to be described to
him. The second work in sculpture was his
relief of St. Cecilia. Flere eight figures enter into
the composition. The work is in marble relief, and
of great delicacy of treatment.
Soon after coming to London, in 1897, Mr. Fuchs
was attracted by medal work. In 1899 the late
Queen Victoria, who had come to know and appre-
ciate his work, “commanded” Mr. Fuchs to give
an exhibition at Windsor Castle. Before this Mr.
Fuchs had completed (in 1898) a medal portrait of
the Prince of Wales (now King Edward VII), which
the Prince had presented to his mother. After the
exhibition at Windsor, Mr. Fuchs (in 1900) made
a medal to commemorate the entry of the reign into
the new century. This interesting medal is a very
fine portrait of the great English Queen at this
period. On the reverse, a symbolic figure bears her
name aloft round the circle of the globe. A copy
of this medal has been, by the King’s permission,
presented to the Metropolitan Museum of New
York.
At the Queen’s death, Mr. Fuchs Avas com-
manded by the present King to come to Osborne
and make a study of the dead Queen, his mother,
then lying in state. It was most appropriate that
Mr. Fuchs should have been selected to make this
priceless study, for the late Queen had been one of
his most constant patrons. Mr. Fuchs was, also,
commanded by King Edward to make his portrait
for the new postage stamp. A drawing in profile
was used for this purpose, and a design from it, in
relief, for the embossed stamp which is printed
upon envelopes, and also for the stamp used in
registering bills. Mr. Fuch’s next commission, also
from King Edward, was a design for the Coronation
Medal, which was conferred upon all those who
were favored with a special invitation to West-