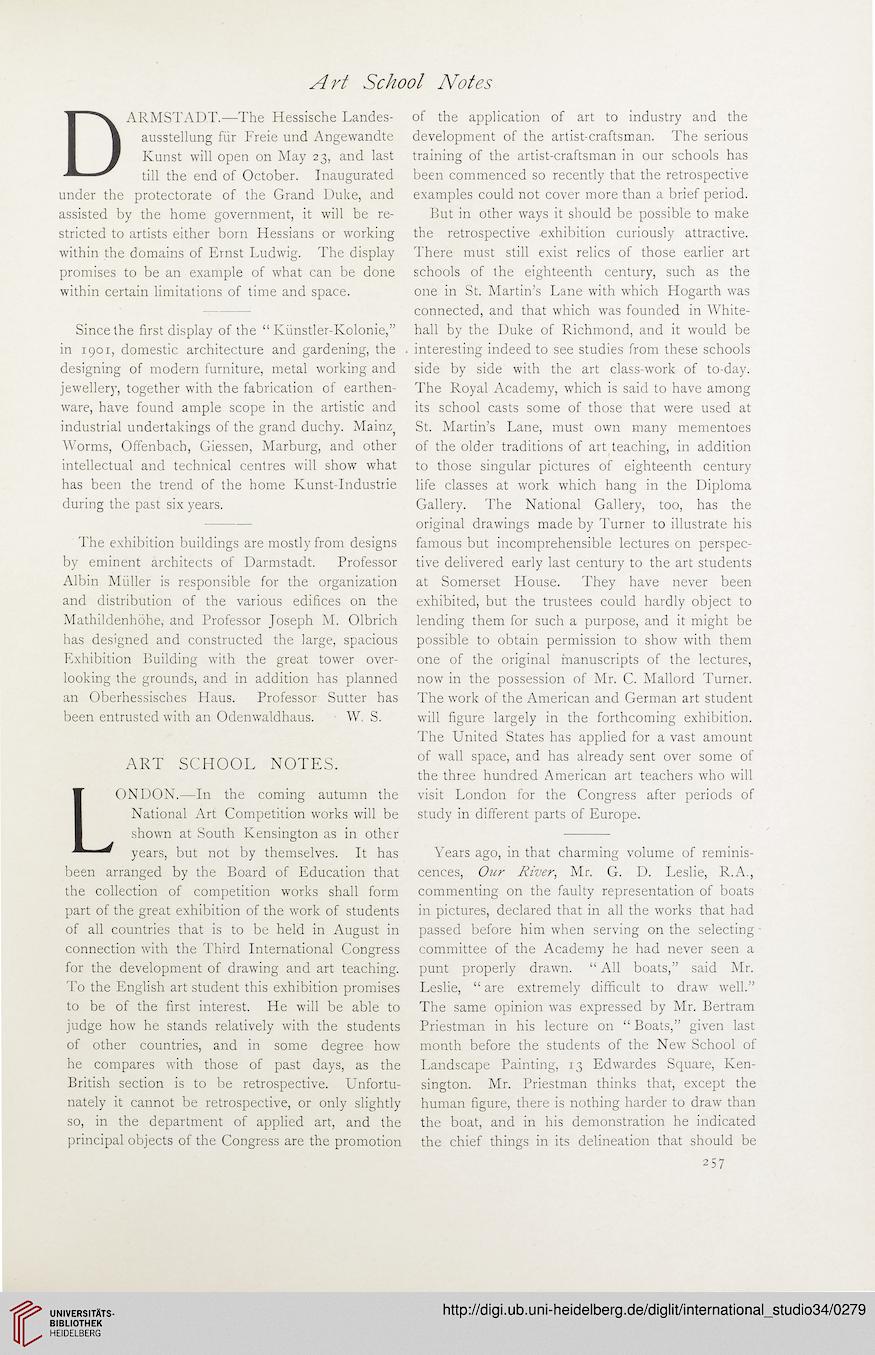 DARMSTADT.—The Hessische Landes-
ausstellung fur Freie und Angewandte
Kunst will open on May 23, and last
till the end of October. Inaugurated
under the protectorate of the Grand Duke, and
assisted by the home government, it will be re-
stricted to artists either born Hessians or working
within the domains of Ernst Ludwig. The display
promises to be an example of what can be done
within certain limitations of time and space.
Since the first display of the “ Kiinstler-Kolonie,”
in 1901, domestic architecture and gardening, the
designing of modern furniture, metal working and
jeweller)’, together with the fabrication of earthen-
ware, have found ample scope in the artistic and
industrial undertakings of the grand duchy. Mainz
Worms, Offenbach, Giessen, Marburg, and other
intellectual and technical centres will show what
has been the trend of the home Kunst-Industrie
during the past six years.

The exhibition buildings are mostly from designs
by eminent architects of Darmstadt. Professor
Albin Muller is responsible for the organization
and distribution of the various edifices on the
Mathildenhohe, and Professor Joseph M. Olbrich
has designed and constructed the large, spacious
Exhibition Building with the great tower over-
looking the grounds, and in addition has planned
an Oberhessiscbes Haus. Professor Sutter has
been entrusted with an Odenwaldhaus. W, S.
ART SCHOOL NOTES.
ONDON.—In the coming autumn the
National Art Competition works will be
shown at South Kensington as in other
years, but not by themselves. It has
been arranged by the Board of Education that
the collection of competition works shall form
part of the great exhibition of the work of students
of all countries that is to be held in August in
connection with the Third International Congress
for the development of drawing and art teaching.
To the English art student this exhibition promises
to be of the first interest. He will be able to
judge how he stands relatively with the students
of other countries, and in some degree how
he compares with those of past days, as the
British section is to be retrospective. Unfortu-
nately it cannot be retrospective, or only slightly
so, in the department of applied art, and the
principal objects of the Congress are the promotion

of the application of art to industry and the
development of the artist-craftsman. The serious
training of the artist-craftsman in our schools has
been commenced so recently that the retrospective
examples could not cover more than a brief period.
But in other ways it should be possible to make
the retrospective -exhibition curiously attractive.
There must still exist relics of those earlier art
schools of the eighteenth century, such as the
one in St. Martin’s Lane with which Hogarth was
connected, and that which was founded in White-
hall by the Duke of Richmond, and it would be
interesting indeed to see studies from these schools
side by side with the art class-work of to-day.
The Royal Academy, which is said to have among
its school casts some of those that were used at
St. Martin’s Lane, must own many mementoes
of the older traditions of art teaching, in addition
to those singular pictures of eighteenth century
life classes at work which hang in the Diploma
Gallery. The National Gallery, too, has the
original drawings made by Turner to illustrate his
famous but incomprehensible lectures on perspec-
tive delivered early last century to the art students
at Somerset House. They have never been
exhibited, but the trustees could hardly object to
lending them for such a purpose, and it might be
possible to obtain permission to show with them
one of the original manuscripts of the lectures,
now in the possession of Mr. C. Mallord Turner.
The work of the American and German art student
will figure largely in the forthcoming exhibition.
The United States has applied for a vast amount
of wall space, and has already sent over some of
the three hundred American art teachers who will
visit London for the Congress after periods of
study in different parts of Europe.

Years ago, in that charming volume of reminis-
cences, Our River, Mr. G. D. Leslie, R.A.,
commenting on the faulty representation of boats
in pictures, declared that in all the works that had
passed before him when serving on the selecting
committee of the Academy he had never seen a
punt properly drawn. “ All boats,” said Mr.
Leslie, “ are extremely difficult to draw well.”
The same opinion was expressed by Mr. Bertram
Priestman in his lecture on “ Boats,” given last
month before the students of the New School of
Landscape Painting, 13 Edwardes Square, Ken-
sington. Mr. Priestman thinks that, except the
human figure, there is nothing harder to draw than
the boat, and in his demonstration he indicated
the chief things in its delineation that should be
257