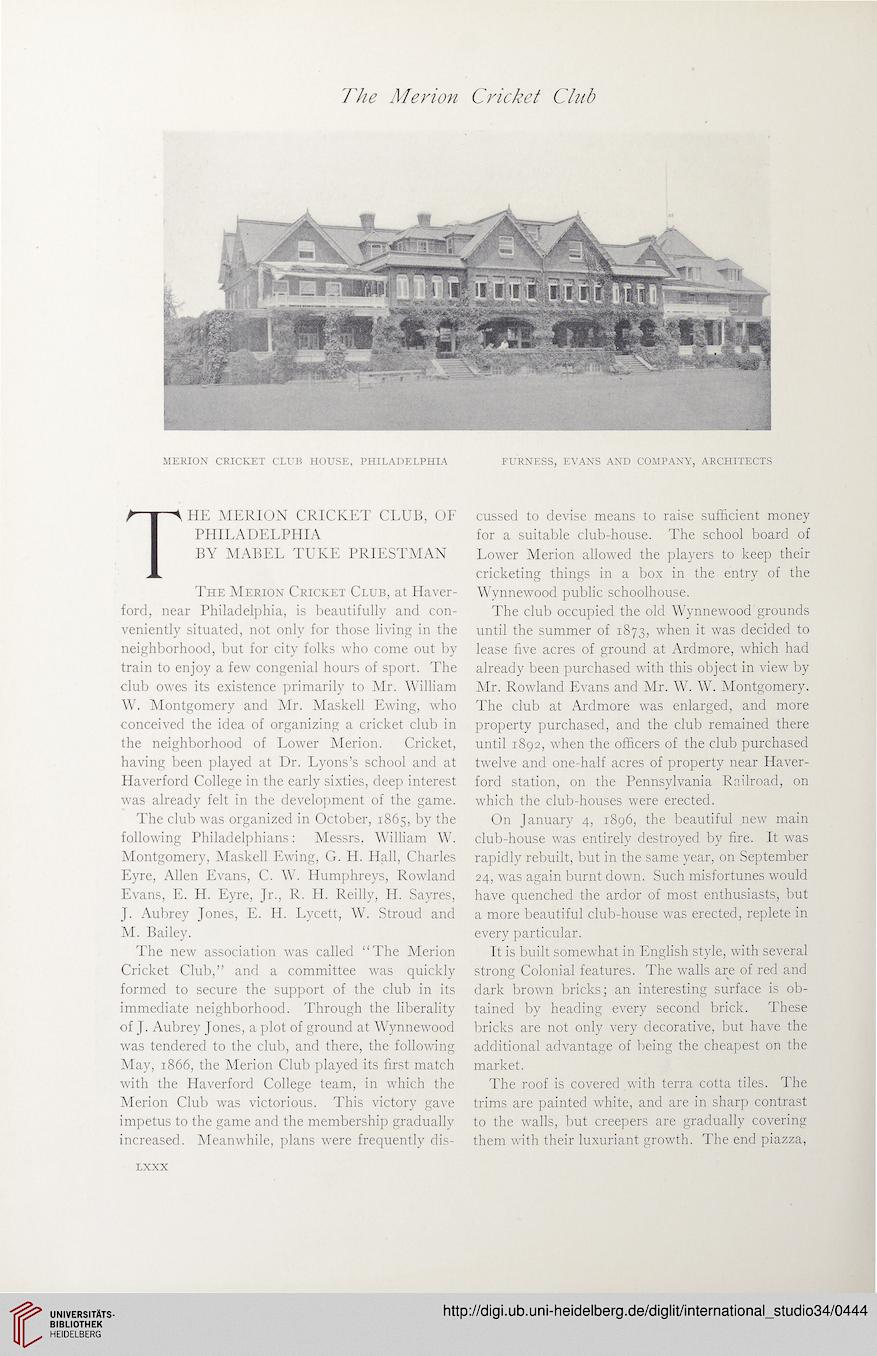 
MERION CRICKET CLUB HOUSE, PHILADELPHIA
The merion cricket club, of
PHILADELPHIA
BY MABEL TUKE PRIESTMAN
The Merion Cricket Club, at Haver-
ford, near Philadelphia, is beautifully and con-
veniently situated, not only for those living in the
neighborhood, but for city folks who come out by
train to enjoy a few congenial hours of sport. The
club owes its existence primarily to Mr. William
W. Montgomery and Air. Maskell Ewing, who
conceived the idea of organizing a cricket club in
the neighborhood of Lower Alerion. Cricket,
having been played at Dr. Lyons’s school and at
Haverford College in the early sixties, deep interest
was already felt in the development of the game.
The club was organized in October, 1865, by the
following Philadelphians: Messrs. William W.
Montgomery, Maskell Ewing, G. H. Hall, Charles
Eyre, Allen Evans, C. W. Humphreys, Rowland
Evans, E. H. Eyre, Jr., R. H. Reilly, H. Sayres,
J. Aubrey Jones, E. H. Lycett, W. Stroud and
At. Bailey.
The new association was called “The Merion
Cricket Club,” and a committee was quickly
formed to secure the support of the club in its
immediate neighborhood. Through the liberality
of J. Aubrey Jones, a plot of ground at Wynnewood
was tendered to the club, and there, the following
May, 1866, the Merion Club played its first match
with the Haverford College team, in which the
Merion Club was victorious. This victory gave
impetus to the game and the membership gradually
increased. Aleanwhile, plans were frequently dis-

FURNESS, EVANS AND COMPANY, ARCHITECTS
cussed to devise means to raise sufficient money
for a suitable club-house. The school board of
Lower Merion allowed the players to keep their
cricketing things in a box in the entry of the
Wynnewood public schoolhouse.
The club occupied the old Wynnewood grounds
until the summer of 1873, when it was decided to
lease five acres of ground at Ardmore, which had
already been purchased with this object in view by
Mr. Rowland Evans and Air. W. W. Alontgomery.
The club at Ardmore was enlarged, and more
property purchased, and the club remained there
until 1892, when the officers of the club purchased
twelve and one-half acres of property near Haver-
ford station, on the Pennsylvania Railroad, on
which the club-houses were erected.
On January 4, 1896, the beautiful new main
club-house was entirely destroyed by fire. It was
rapidly rebuilt, but in the same year, on September
24, was again burnt down. Such misfortunes would
have quenched the ardor of most enthusiasts, but
a more beautiful club-house was erected, replete in
every particular.
It is built somewhat in English style, with several
strong Colonial features. The walls are of red and
dark brown bricks; an interesting surface is ob-
tained by heading every second brick. These
bricks are not only very decorative, but have the
additional advantage of being the cheapest on the
market.
The roof is covered with terra cotta tiles. The
trims are painted white, and are in sharp contrast
to the walls, but creepers are gradually covering
them with their luxuriant growth. The end piazza,