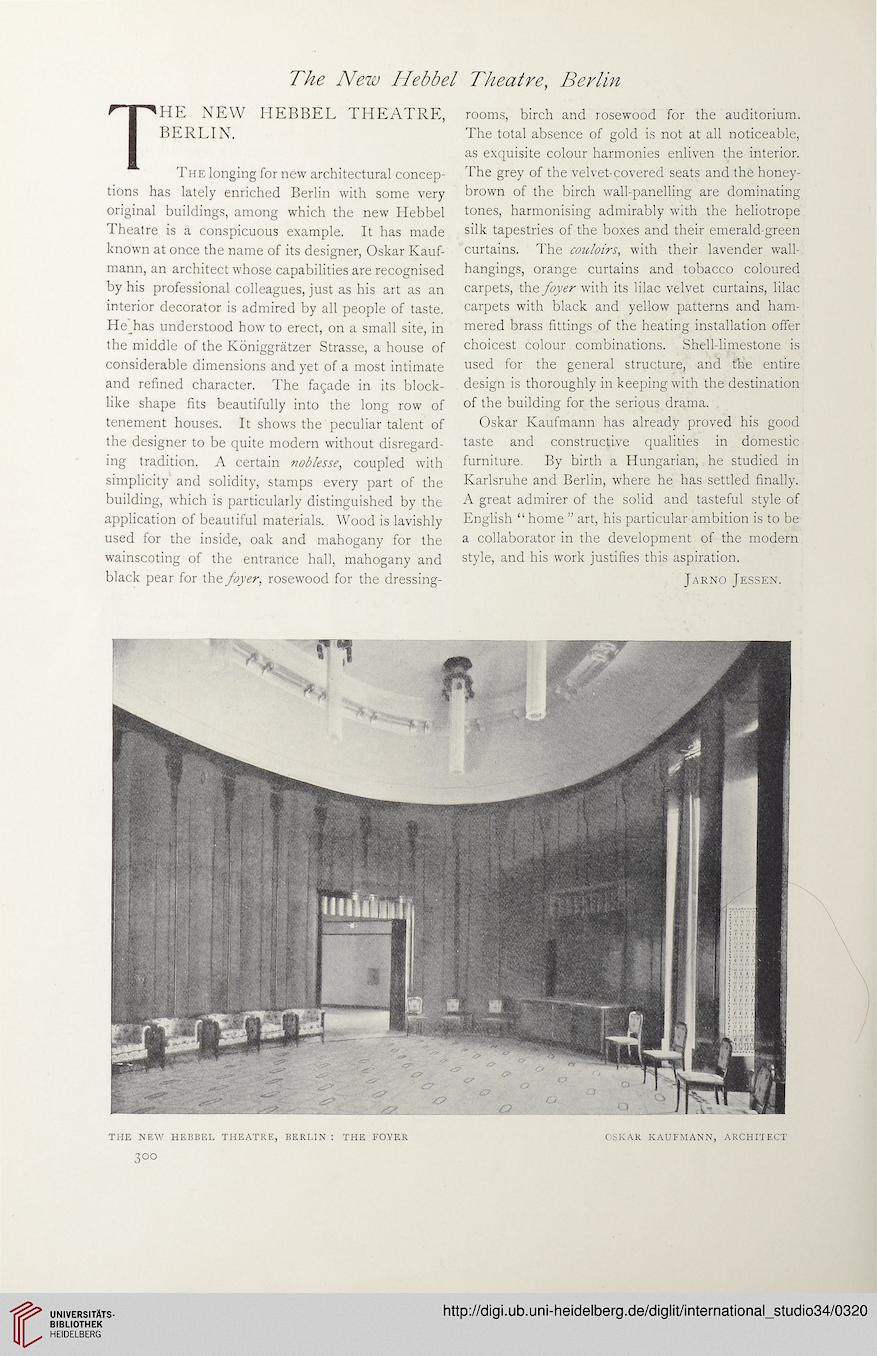 The new hebbel theatre,
BERLIN.
The longing for new architectural concep-
tions has lately enriched Berlin with some very
original buildings, among which the new Hebbel
Theatre is a conspicuous example. It has made
known at once the name of its designer, Oskar Ivauf-
mann, an architect whose capabilities are recognised
by his professional colleagues, just as his art as an
interior decorator is admired by all people of taste.
He^has understood howto erect, on a small site, in
the middle of the Koniggratzer Strasse, a house of
considerable dimensions and yet of a most intimate
and refined character. The fapade in its block-
like shape fits beautifully into the long row of
tenement houses. It shows the peculiar talent of
the designer to be quite modern without disregard-
ing tradition. A certain noblesse, coupled with
simplicity and solidity, stamps every part of the
building, which is particularly distinguished by the
application of beautiful materials. Wood is lavishly
used for the inside, oak and mahogany for the
wainscoting of the entrance hall, mahogany and
black pear for the foyer, rosewood for the dressing-

rooms, birch and rosewood for the auditorium.
The total absence of gold is not at all noticeable,
as exquisite colour harmonies enliven the interior.
The grey of the velvet-covered seats and the honey-
brown of the birch wall-panelling are dominating
tones, harmonising admirably with the heliotrope
silk tapestries of the boxes and their emerald-green
curtains. The couloirs, with their lavender wall-
hangings, orange curtains and tobacco coloured
carpets, the foyer with its lilac velvet curtains, lilac
carpets with black and yellow patterns and ham-
mered brass fittings of the heating installation offer
choicest colour combinations. Shell-limestone is
used for the general structure, and the entire
design is thoroughly in keeping with the destination
of the building for the serious drama.
Oskar Kaufmann has already proved his good
taste and constructive qualities in domestic
furniture. By birth a Hungarian, he studied in
Karlsruhe and Berlin, where he has settled finally.
A great admirer of the solid and tasteful style of
English “ home ” art, his particular ambition is to be
a collaborator in the development of the modern
style, and his work justifies this aspiration.
Jarno Jessen.