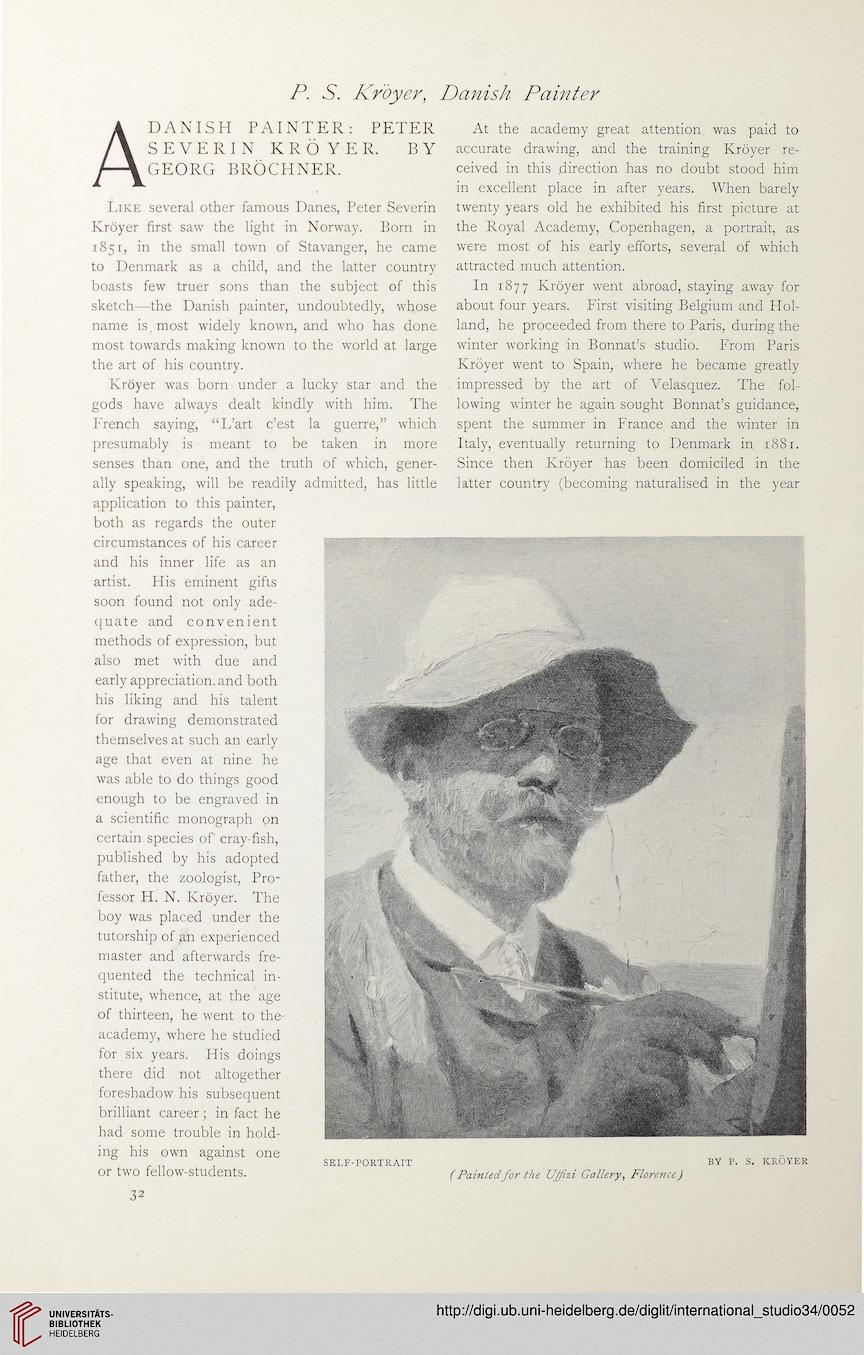 A DANISH PAINTER: PETER
SEVERIN KROYER. BY
GEORG BROCHNER.
Like several other famous Danes, Peter Severin
Kroyer first saw the light in Norway. Born in
1851, in the small town of Stavanger, he came
to Denmark as a child, and the latter country
boasts few truer sons than the subject of this
sketch—the Danish painter, undoubtedly, whose
name is most widely known, and who has done
most towards making known to the world at large
the art of his country.
Kroyer was born under a lucky star and the
gods have always dealt kindly with him. The
French saying, “L’art c’est la guerre,” which
presumably is meant to be taken in more
senses than one, and the truth of which, gener-
ally speaking, will be readily admitted, has little
application to this painter,
both as regards the outer
circumstances of his career
and his inner life as an
artist. His eminent gifts
soon found not only ade-
quate and convenient
methods of expression, but
also met with due and
early appreciation, and both
his liking and his talent
for drawing demonstrated
themselves at such an early
age that even at nine he
was able to do things good
enough to be engraved in
a scientific monograph on
certain species of cray-fish,
published by his adopted
father, the zoologist, Pro-
fessor H. N. Kroyer. The
boy was placed under the
tutorship of an experienced
master and afterwards fre-
quented the technical in-
stitute, whence, at the age
of thirteen, he went to the
academy, where he studied
for six years. His doings
there did not altogether
foreshadow his subsequent
brilliant career; in fact he
had some trouble in hold-
ing his own against one
. „ ° SELF-PORTRAIT
or two fellow-students.

At the academy great attention was paid to
accurate drawing, and the training Kroyer re-
ceived in this direction has no doubt stood him
in excellent place in after years. When barely
twenty years old he exhibited his first picture at
the Royal Academy, Copenhagen, a portrait, as
were most of his early efforts, several of which
attracted much attention.
In 1877 Kroyer went abroad, staying away for
about four years. First visiting Belgium and Hol-
land, he proceeded from there to Paris, during the
winter working in Bonnat’s studio. From Paris
Kroyer went to Spain, where he became greatly
impressed by the art of Velasquez. The fol-
lowing winter he again sought Bonnat’s guidance,
spent the summer in France and the winter in
Italy, eventually returning to Denmark in 1881.
Since then Kroyer has been domiciled in the
latter country (becoming naturalised in the year

by p. s. kr5yer
( Painted for the UJfizi Gallery, Florence)