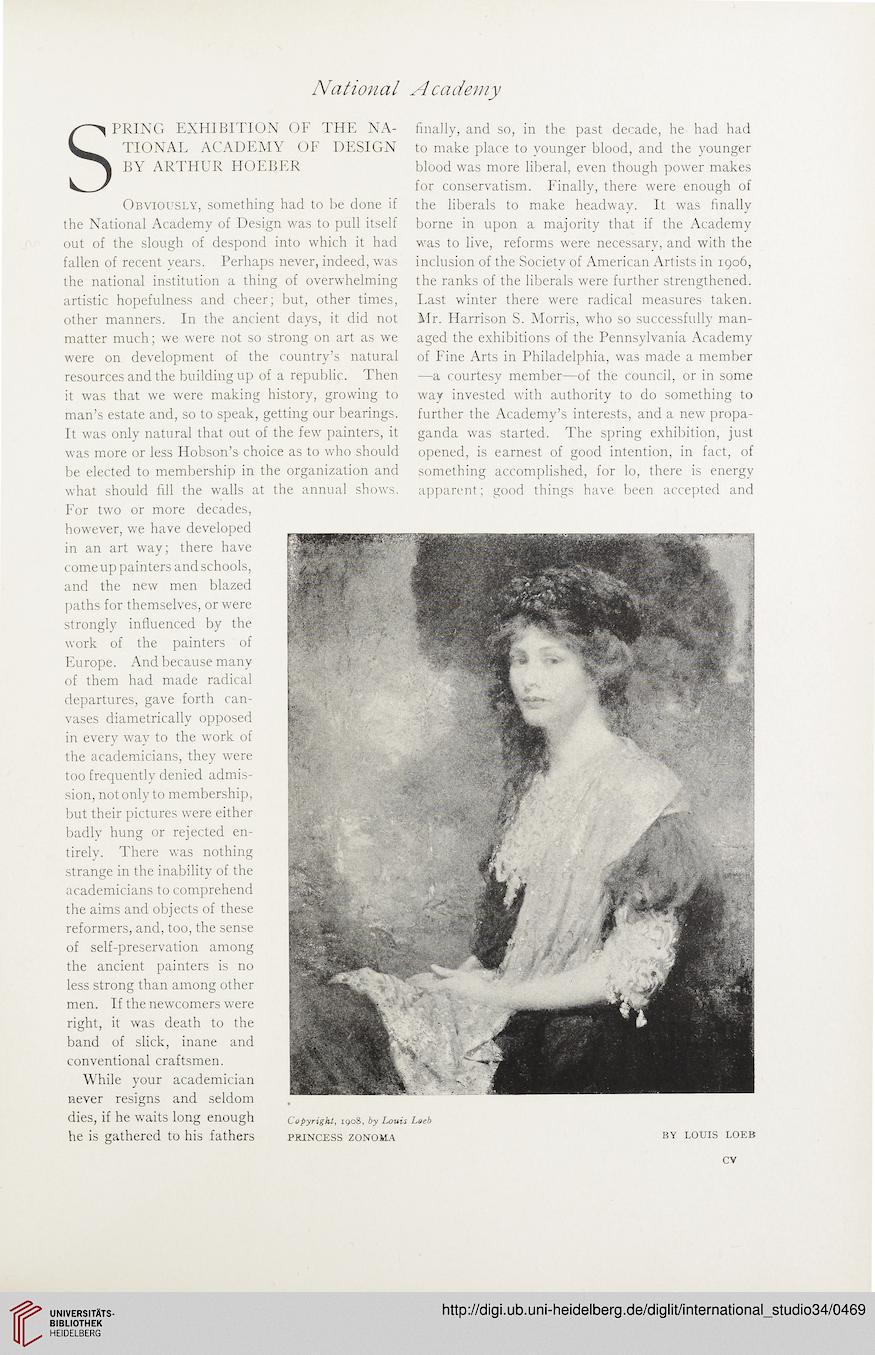 SPRING EXHIBITION OF THE NA-
TIONAL ACADEMY OF DESIGN
BY ARTHUR HOEBER
Obviously, something had to be done if
the National Academy of Design was to pull itself
out of the slough of despond into which it had
fallen of recent years. Perhaps never, indeed, was
the national institution a thing of overwhelming
artistic hopefulness and cheer; but, other times,
other manners. In the ancient days, it did not
matter much; we were not so strong on art as we
were on development of the country’s natural
resources and the building up of a republic. Then
it was that we were making history, growing to
man’s estate and, so to speak, getting our bearings.
It was only natural that out of the few painters, it
was more or less Hobson’s choice as to who should
be elected to membership in the organization and
what should fill the walls at the annual shows.
For two or more decades,
however, we have developed
in an art way; there have
come up painters and schools,
and the new men blazed
paths for themselves, or were
strongly influenced by the
work of the painters of
Europe. And because many
of them had made radical
departures, gave forth can-
vases diametrically opposed
in every way to the work of
the academicians, they were
too frequently denied admis-
sion, not only to membership,
but their pictures were either
badly hung or rejected en-
tirely. There was nothing
strange in the inability of the
academicians to comprehend
the aims and objects of these
reformers, and, too, the sense
of self-preservation among
the ancient painters is no
less strong than among other
men. If the newcomers were
right, it was death to the
band of slick, inane and
conventional craftsmen.
While your academician
never resigns and seldom
dies, if he waits long enough
he is gathered to his fathers

finally, and so, in the past decade, he had had
to make place to younger blood, and the younger
blood was more liberal, even though power makes
for conservatism. Finally, there were enough of
the liberals to make headway. It was finally
borne in upon a majority that if the Academy
was to live, reforms were necessary, and with the
inclusion of the Society of American Artists in 1906,
the ranks of the liberals were further strengthened.
Last winter there were radical measures taken.
Mr. Harrison S. Morris, who so successfully man-
aged the exhibitions of the Pennsylvania Academy
of Fine Arts in Philadelphia, was made a member
—a courtesy member—of the council, or in some
way invested with authority to do something to
further the Academy’s interests, and a new propa-
ganda was started. The spring exhibition, just
opened, is earnest of good intention, in fact, of
something accomplished, for lo, there is energy
apparent; good things have been accepted and