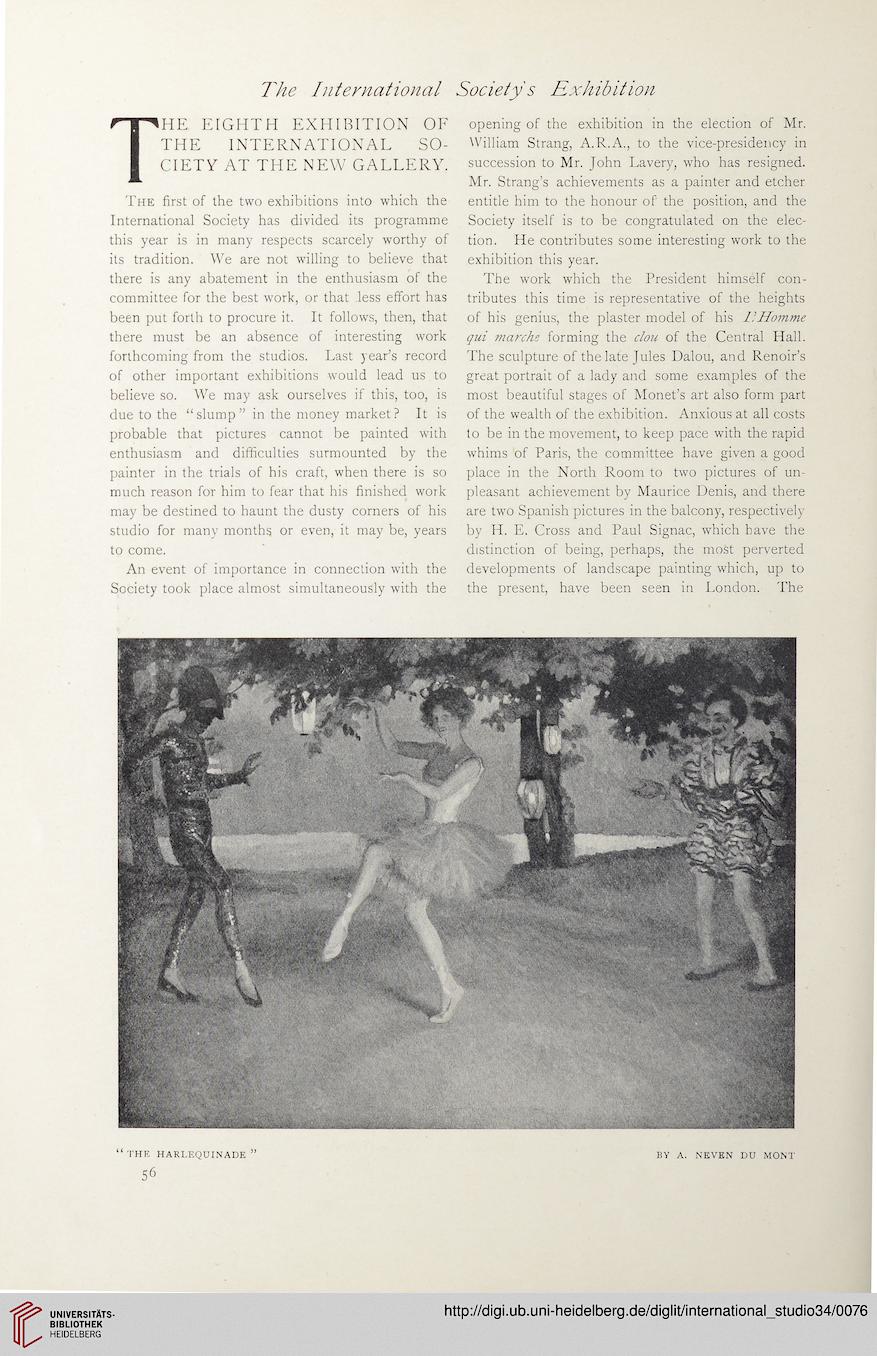 The eighth exhibition of
THE INTERNATIONAL SO-
CIETY AT THE NEW GALLERY.
The first of the two exhibitions into which the
International Society has divided its programme
this year is in many respects scarcely worthy of
its tradition. We are not willing to believe that
there is any abatement in the enthusiasm of the
committee for the best work, or that less effort has
been put forth to procure it. It follows, then, that
there must be an absence of interesting work
forthcoming from the studios. Last year’s record
of other important exhibitions would lead us to
believe so. We may ask ourselves if this, too, is
due to the “slump” in the money market? It is
probable that pictures cannot be painted with
enthusiasm and difficulties surmounted by the
painter in the trials of his craft, when there is so
much reason for him to fear that his finished work
may be destined to haunt the dusty corners of his
studio for many months or even, it may be, years
to come.
An event of importance in connection with the
Society took place almost simultaneously with the

opening of the exhibition in the election of Mr.
William Strang, A.R.A., to the vice-presidency in
succession to Mr. John Lavery, who has resigned.
Mr. Strang’s achievements as a painter and etcher
entitle him to the honour of the position, and the
Society itself is to be congratulated on the elec-
tion. He contributes some interesting work to the
exhibition this year.
The work which the President himself con-
tributes this time is representative of the heights
of his genius, the plaster model of his A’Homme
qui marche forming the clou of the Central Hall.
The sculpture of the late Jules Dalou, and Renoir’s
great portrait of a lady and some examples of the
most beautiful stages of Monet’s art also form part
of the wealth of the exhibition. Anxious at all costs
to be in the movement, to keep pace with the rapid
whims of Paris, the committee have given a good
place in the North Room to two pictures of un-
pleasant achievement by Maurice Denis, and there
are two Spanish pictures in the balcony, respectively
by H. E. Cross and Paul Signac, which have the
distinction of being, perhaps, the most perverted
developments of landscape painting which, up to
the present, have been seen in London. The

BY A. NEVEN DU MONT