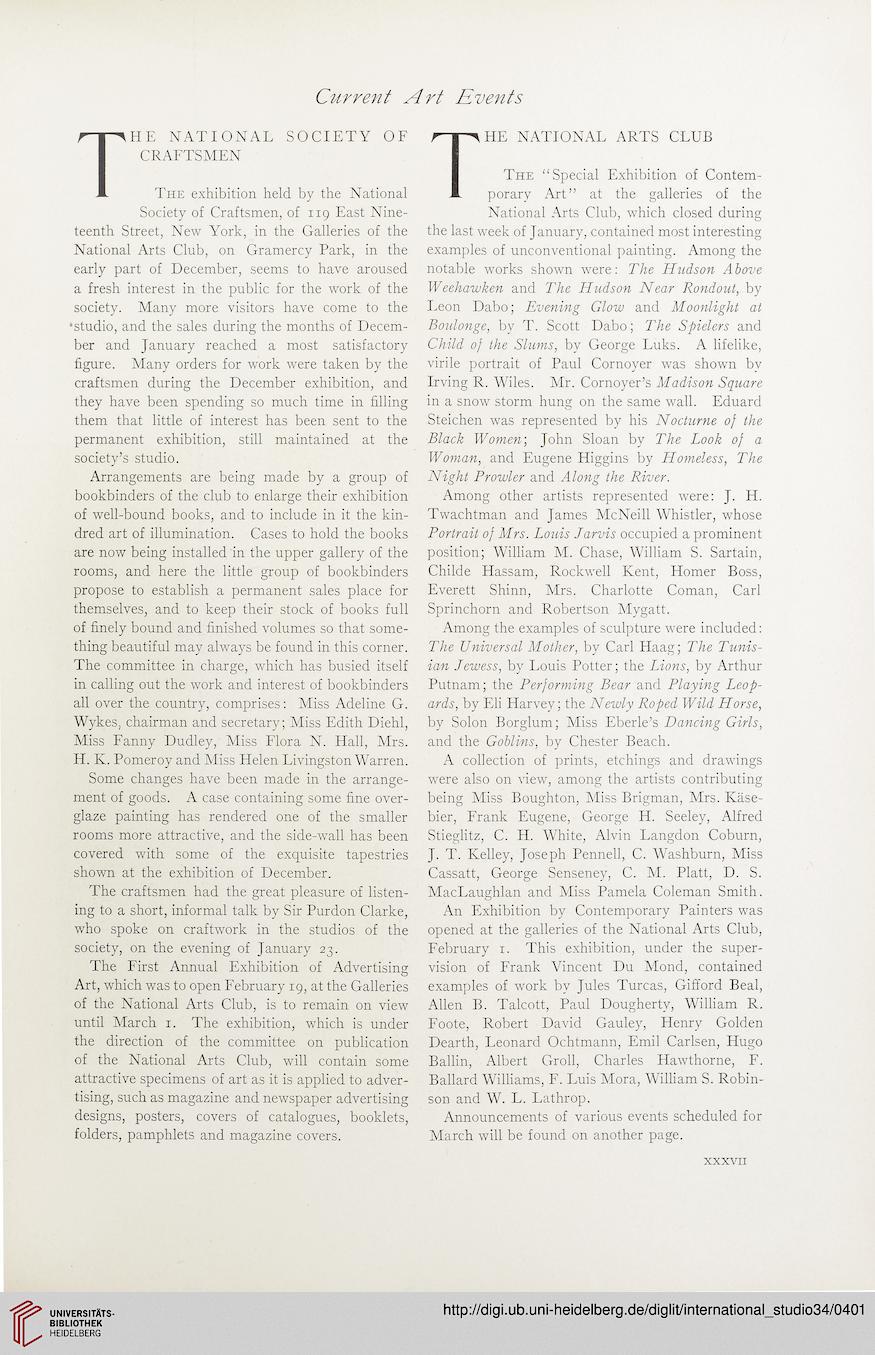 HE NATIONAL SOCIETY OF
CRAFTSMEN

The exhibition held by the National
Society of Craftsmen, of 119 East Nine-
teenth Street, New York, in the Galleries of the
National Arts Club, on Gramercy Park, in the
early part of December, seems to have aroused
a fresh interest in the public for the work of the
society. Many more visitors have come to the
‘studio, and the sales during the months of Decem-
ber and January reached a most satisfactory
figure. Many orders for work were taken by the
craftsmen during the December exhibition, and
they have been spending so much time in filling
them that little of interest has been sent to the
permanent exhibition, still maintained at the
society’s studio.
Arrangements are being made by a group of
bookbinders of the club to enlarge their exhibition
of well-bound books, and to include in it the kin-
dred art of illumination. Cases to hold the books
are now being installed in the upper gallery of the
rooms, and here the little group of bookbinders
propose to establish a permanent sales place for
themselves, and to keep their stock of books full
of finely bound and finished volumes so that some-
thing beautiful may always be found in this corner.
The committee in charge, which has busied itself
in calling out the work and interest of bookbinders
all over the country, comprises: Miss Adeline G.
Wykes, chairman and secretary; Miss Edith Diehl,
Miss Fanny Dudley, Miss Flora N. Hall, Mrs.
H. K. Pomeroy and Miss Helen Livingston Warren.
Some changes have been made in the arrange-
ment of goods. A case containing some fine over-
glaze painting has rendered one of the smaller
rooms more attractive, and the side-wall has been
covered with some of the exquisite tapestries
shown at the exhibition of December.
The craftsmen had the great pleasure of listen-
ing to a short, informal talk by Sir Purdon Clarke,
who spoke on craftwork in the studios of the
society, on the evening of January 23.
The First Annual Exhibition of Advertising
Art, which was to open February 19, at the Galleries
of the National Arts Club, is to remain on view
until March 1. The exhibition, which is under
the direction of the committee on publication
of the National Arts Club, will contain some
attractive specimens of art as it is applied to adver-
tising, such as magazine and newspaper advertising
designs, posters, covers of catalogues, booklets,
folders, pamphlets and magazine covers.