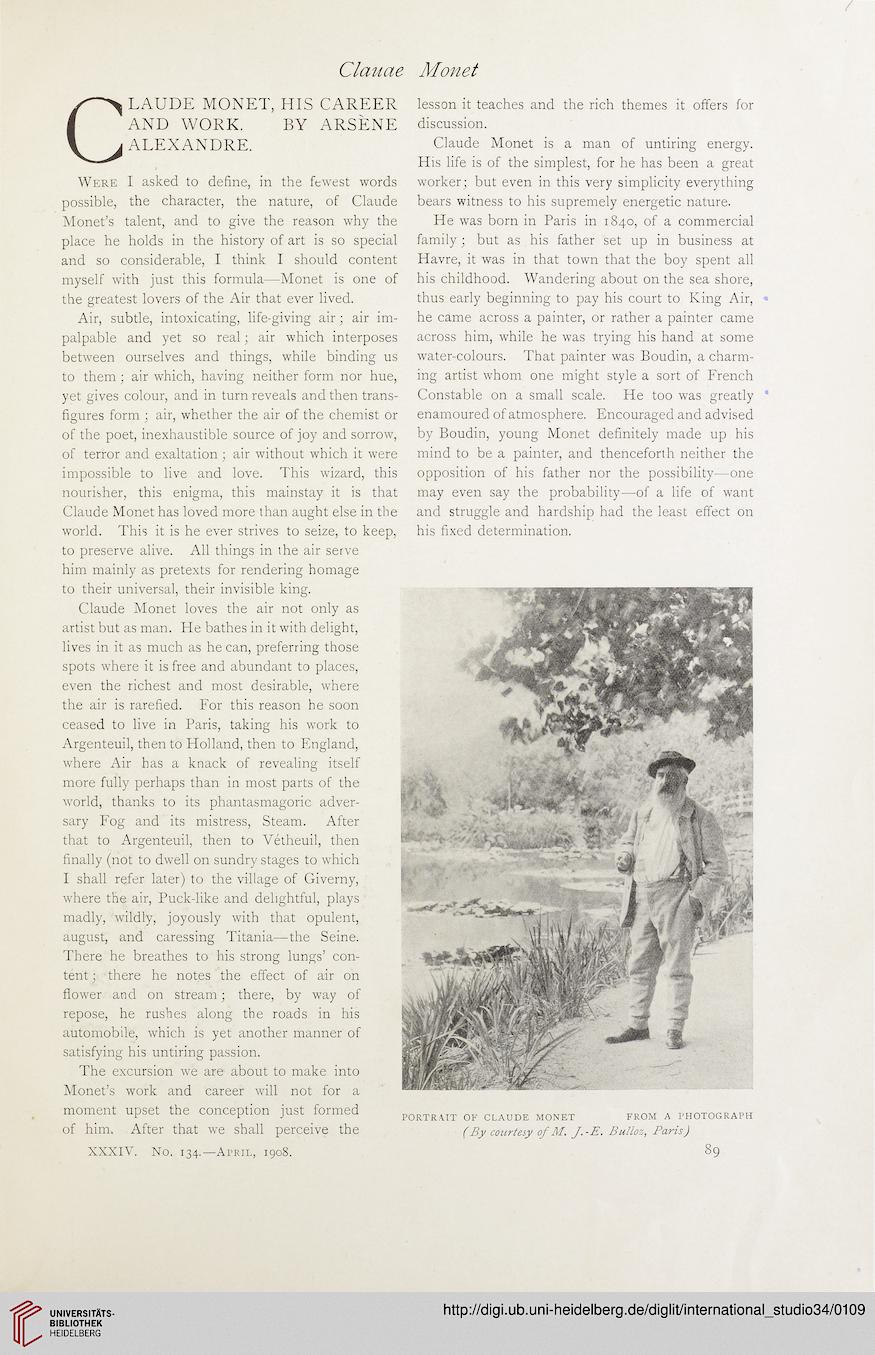 CLAUDE MONET, HIS CAREER
AND WORK. BY ARSENE
ALEXANDRE.
Were I asked to define, in the fewest words
possible, the character, the nature, of Claude
Monet’s talent, and to give the reason why the
place he holds in the history of art is so special
and so considerable, I think I should content
myself with just this formula—Monet is one of
the greatest lovers of the Air that ever lived.
Air, subtle, intoxicating, life-giving air; air im-
palpable and yet so real; air which interposes
between ourselves and things, while binding us
to them; air which, having neither form nor hue,
yet gives colour, and in turn reveals and then trans-
figures form ; air, whether the air of the chemist or
of the poet, inexhaustible source of joy and sorrow,
of terror and exaltation ; air without which it were
impossible to live and love. This wizard, this
nourisher, this enigma, this mainstay it is that
Claude Monet has loved more than aught else in the
world. This it is he ever strives to seize, to keep,
to preserve alive. All things in the air serve
him mainly as pretexts for rendering homage
to their universal, their invisible king.
Claude Monet loves the air not only as
artist but as man. He bathes in it with delight,
lives in it as much as he can, preferring those
spots where it is free and abundant to places,
even the richest and most desirable, where
the air is rarefied. For this reason he soon
ceased to live in Paris, taking his work to
Argenteuil, then to Holland, then to England,
where Air has a knack of revealing itself
more fully perhaps than in most parts of the
world, thanks to its phantasmagoric adver-
sary Fog and its mistress, Steam. After
that to Argenteuil, then to Vetheuil, then
finally (not to dwell on sundry stages to which
I shall refer later) to the village of Giverny,
where the air, Puck-like and delightful, plays
madly, wildly, joyously with that opulent,
august, and caressing Titania—the Seine.
There he breathes to his strong lungs’ con-
tent ; there he notes the effect of air on
flower and on stream; there, by way of
repose, he rushes along the roads in his
automobile, which is yet another manner of
satisfying his untiring passion.
The excursion we are about to make into
Monet’s work and career will not for a
moment upset the conception just formed
of him. After that we shall perceive the
XXXIV. No. 134.-—April, 1908.

lesson it teaches and the rich themes it offers for
discussion.
Claude Monet is a man of untiring energy.
His life is of the simplest, for he has been a great
worker ; but even in this very simplicity everything
bears witness to his supremely energetic nature.
He was born in Paris in 1840, of a commercial
family ; but as his father set up in business at
Havre, it was in that town that the boy spent all
his childhood. Wandering about on the sea shore,
thus early beginning to pay his court to King Air,
he came across a painter, or rather a painter came
across him, while he was trying his hand at some
water-colours. That painter was Boudin, a charm-
ing artist whom one might style a sort of French
Constable on a small scale. He too was greatly
enamoured of atmosphere. Encouraged and advised
by Boudin, young Monet definitely made up his
mind to be a painter, and thenceforth neither the
opposition of his father nor the possibility—one
may even say the probability—of a life of want
and struggle and hardship had the least effect on
his fixed determination.


PORTRAIT OF CLAUDE MONET FROM A PHOTOGRAPH
(By courtesy of M. J.-E. Bulloz., Pans)