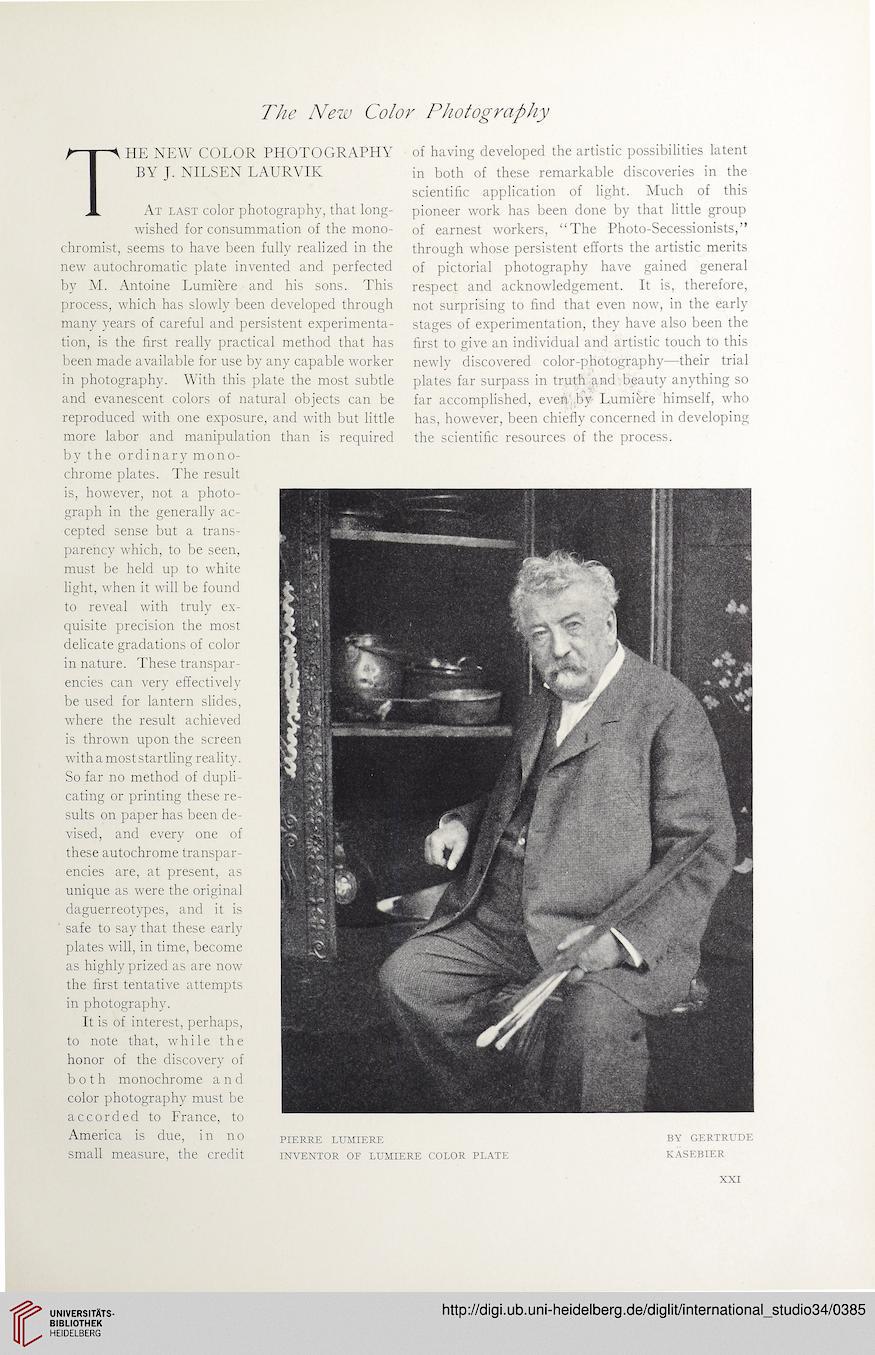 At last color photography, that long-
wished for consummation of the mono-
chromist, seems to have been fully realized in the
new autochromatic plate invented and perfected
by M. Antoine Lumiere and his sons. This
process, which has slowly been developed through
many years of careful and persistent experimenta-
tion, is the first really practical method that has
been made available for use by any capable worker
in photography. With this plate the most subtle
and evanescent colors of natural objects can be
reproduced with one exposure, and with but little
more labor and manipulation than is required
by the ordinary mono-
chrome plates. The result
is, however, not a photo-
graph in the generally ac-
cepted sense but a trans-
parency which, to be seen,
must be held up to white
light, when it will be found
to reveal with truly ex-
quisite precision the most
delicate gradations of color
in nature. These transpar-
encies can very effectively
be used for lantern slides,
where the result achieved
is thrown upon the screen
with a most startling reality.
So far no method of dupli-
cating or printing these re-
sults on paper has been de-
vised, and every one of
these autochrome transpar-
encies are, at present, as
unique as were the original
daguerreotypes, and it is
safe to say that these early
plates will, in time, become
as highly prized as are now
the first tentative attempts
in photography.
It is of interest, perhaps,
to note that, while the
honor of the discovery of
both monochrome a n d
color photography must be
accorded to France, to
America is due, in no
small measure, the credit

of having developed the artistic possibilities latent
in both of these remarkable discoveries in the
scientific application of light. Much of this
pioneer work has been done by that little group
of earnest workers, “The Photo-Secessionists,”
through whose persistent efforts the artistic merits
of pictorial photography have gained general
respect and acknowledgement. It is, therefore,
not surprising to find that even now, in the early
stages of experimentation, they have also been the
first to give an individual and artistic touch to this
newly discovered color-photography—their trial
plates far surpass in truth and beauty anything so
far accomplished, even by Lumiere himself, who
has, however, been chiefly concerned in developing
the scientific resources of the process.