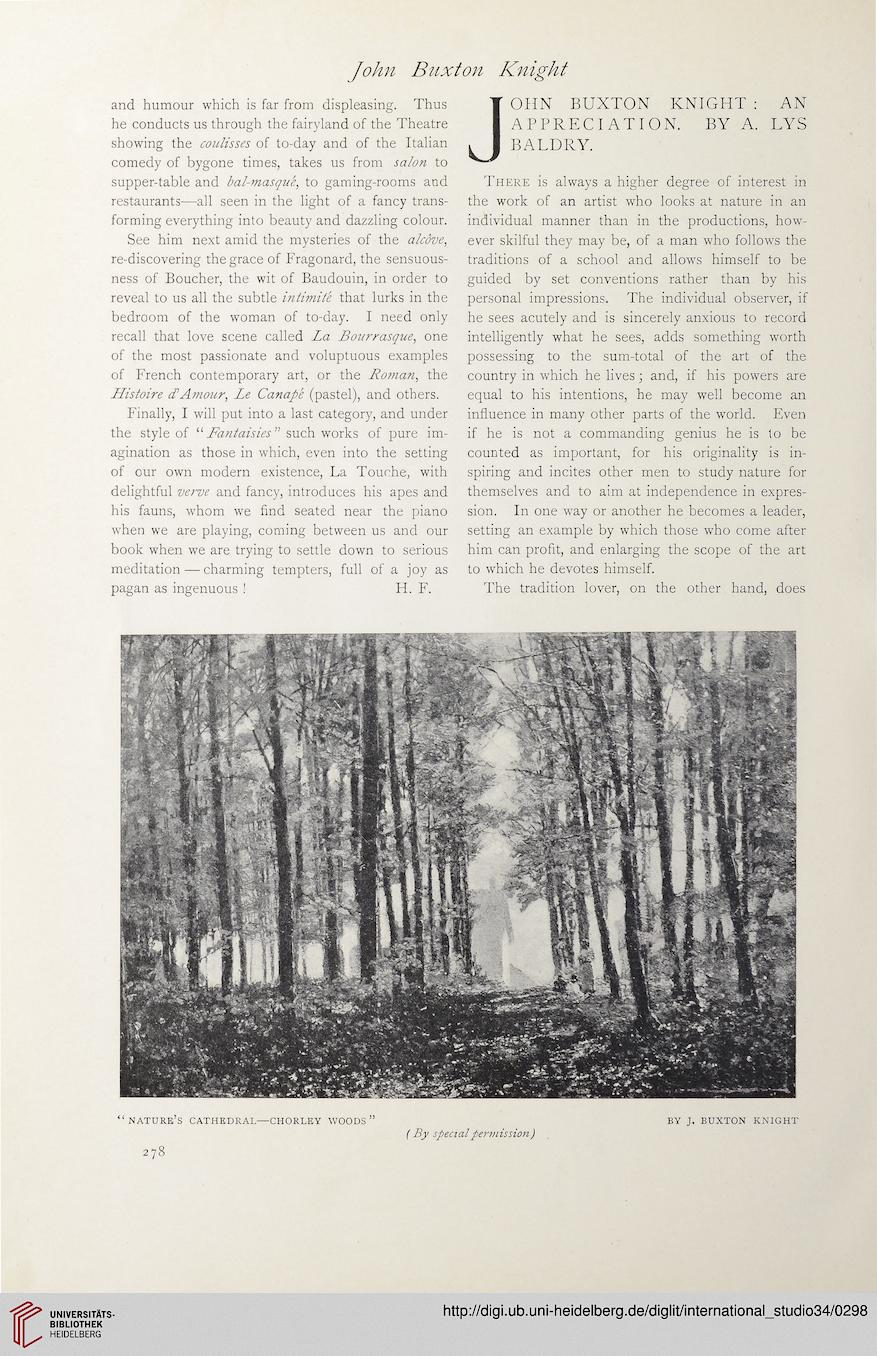 and humour which is far from displeasing. Thus
he conducts us through the fairyland of the Theatre
showing the coulisses of to-day and of the Italian
comedy of bygone times, takes us from salon to
supper-table and bal-masqu'e., to gaming-rooms and
restaurants-—all seen in the light of a fancy trans-
forming everything into beauty and dazzling colour.
See him next amid the mysteries of the alcove,
re-discovering the grace of Fragonard, the sensuous-
ness of Boucher, the wit of Baudouin, in order to
reveal to us all the subtle intimite that lurks in the
bedroom of the woman of to-day. I need only
recall that love scene called La Bourrasque, one
of the most passionate and voluptuous examples
of French contemporary art, or the Roman, the
Histoire cFAmour, Le Canape (pastel), and others.
Finally, I will put into a last category, and under
the style of “ Fantaisies ” such works of pure im-
agination as those in which, even into the setting
of our own modern existence, La Touche, with
delightful verve and fancy, introduces his apes and
his fauns, whom we find seated near the piano
when we are playing, coming between us and our
book when we are trying to settle down to serious
meditation — charming tempters, full of a joy as
pagan as ingenuous ! H. F.

JOHN BUXTON KNIGHT : AN
APPRECIATION. BY A. LYS
BALDRY.
There is always a higher degree of interest in
the work of an artist who looks at nature in an
individual manner than in the productions, how-
ever skilful they may be, of a man who follows the
traditions of a school and allows himself to be
guided by set conventions rather than by his
personal impressions. The individual observer, if
he sees acutely and is sincerely anxious to record
intelligently what he sees, adds something worth
possessing to the sum-total of the art of the
country in which he lives; and, if his powers are
equal to his intentions, he may well become an
influence in many other parts of the world. Even
if he is not a commanding genius he is to be
counted as important, for his originality is in-
spiring and incites other men to study nature for
themselves and to aim at independence in expres-
sion. In one way or another he becomes a leader,
setting an example by which those who come after
him can profit, and enlarging the scope of the art
to which he devotes himself.
The tradition lover, on the other hand, does