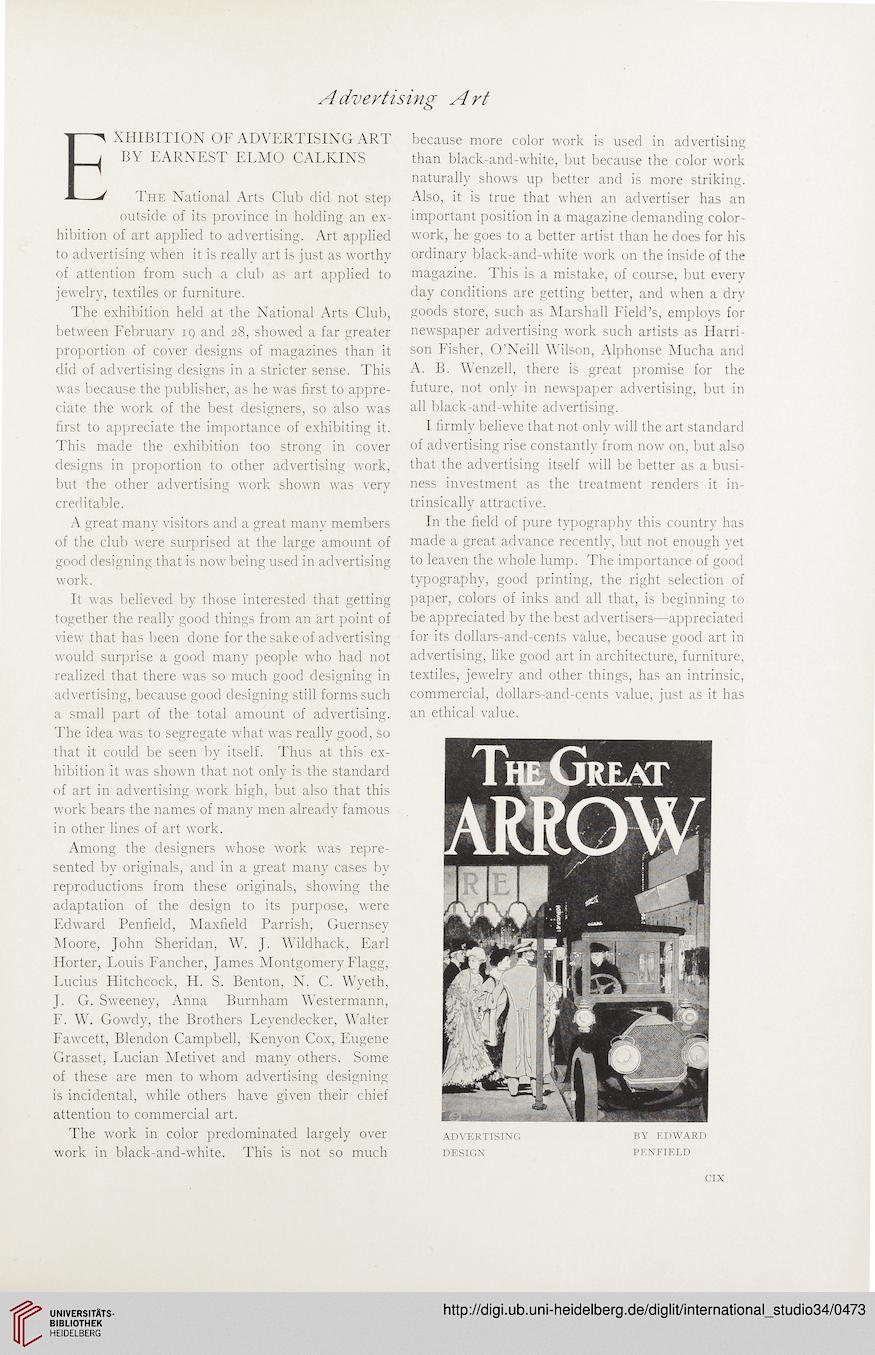 The National Arts Club did not step
outside of its province in holding an ex-
hibition of art applied to advertising. Art applied
to advertising when it is really art is just as worthy
of attention from such a club as art applied to
jewelry, textiles or furniture.
The exhibition held at the National Arts Club,
between February 19 and 28, showed a far greater
proportion of cover designs of magazines than it
did of advertising designs in a stricter sense. This
was because the publisher, as he was first to appre-
ciate the work of the best designers, so also was
first to appreciate the importance of exhibiting it.
This made the exhibition too strong in cover
designs in proportion to other advertising work,
but the other advertising work shown was very

creditable.
A great many visitors and a great many members
of the club were surprised at the large amount of
good designing that is now being used in advertising
work.
It was believed by those interested that getting
together the really good things from an art point of
view that has been done for the sake of advertising
would surprise a good many people who had not
realized that there was so much good designing in
advertising, because good designing still forms such
a small part of the total amount of advertising.
The idea was to segregate what was really good, so
that it could be seen by itself. Thus at this ex-
hibition it was shown that not only is the standard
of art in advertising work high, but also that this
work bears the names of many men already famous
in other lines of art wrork.
Among the designers whose wTork was repre-
sented by originals, and in a great many cases by
reproductions from these originals, showing the
adaptation of the design to its purpose, wyere
Edward Penfield, Maxfield Parrish, Guernsey
Moore, John Sheridan, W. J. Wildhack, Earl
Horter, Louis Fancher, James Montgomery Flagg,
Lucius Hitchcock, H. S. Benton, N. C. Wyeth,
J. G. Sweeney, Anna Burnham Westermann,
F. W. Gowdy, the Brothers Leyendecker, Walter
Fawcett, Blendon Campbell, Kenyon Cox, Eugene
Grasset, Lucian Metivet and many others. Some
of these are men to whom advertising designing
is incidental, while others have given their chief
attention to commercial art.
The work in color predominated largely over
work in black-and-wEite. This is not so much

because more color work is used in advertising
than black-and-white, but because the color work
naturally shows up better and is more striking.
Also, it is true that when an advertiser has an
important position in a magazine demanding color-
work, he goes to a better artist than he does for his
ordinary black-and-white work on the inside of the
magazine. This is a mistake, of course, but every
day conditions are getting better, and when a dry
goods store, such as Marshall Field’s, employs for
newspaper advertising work such artists as Harri-
son Fisher, O’Neill Wilson, Alphonse Mucha and
A. B. Wenzell, there is great promise for the
future, not only in newspaper advertising, but in
all black-and-white advertising.
I firmly believe that not only will the art standard
of advertising rise constantly from now on, but also
that the advertising itself will be better as a busi-
ness investment as the treatment renders it in-
trinsically attractive.
In the field of pure typography this country has
made a great advance recently, but not enough yet
to leaven the whole lump. The importance of good
typography, good printing, the right selection of
paper, colors of inks and all that, is beginning to
be appreciated by the best advertisers—appreciated
for its dollars-and-cents value, because good art in
advertising, like good art in architecture, furniture,
textiles, jewelry and other things, has an intrinsic,
commercial, dollars-and-cents value, just as it has
an ethical value.