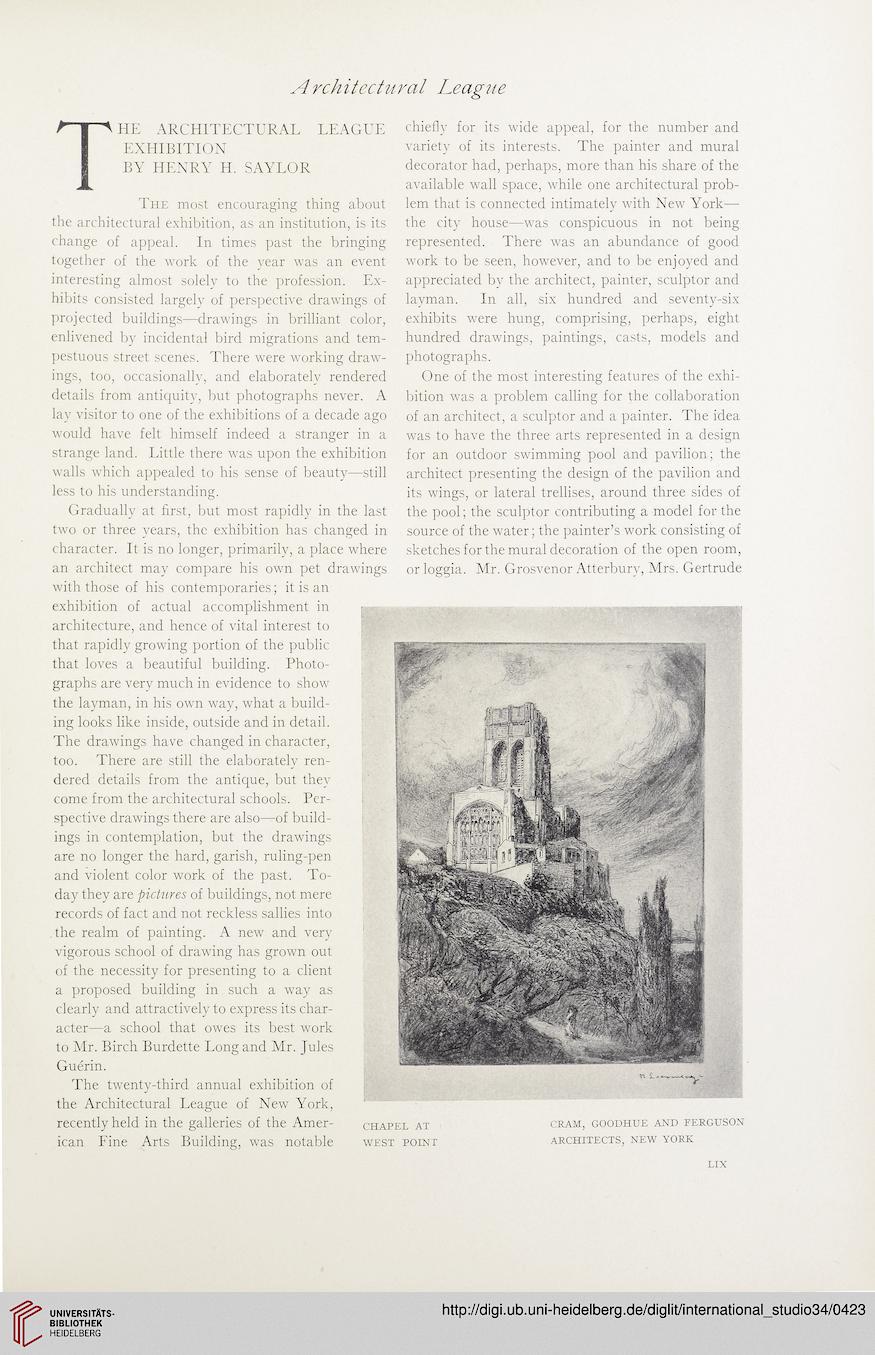 The most encouraging thing about
the architectural exhibition, as an institution, is its
change of appeal. In times past the bringing
together of the work of the year was an event
interesting almost solely to the profession. Ex-
hibits consisted largely of perspective drawings of
projected buildings—drawings in brilliant color,
enlivened by incidental bird migrations and tem-
pestuous street scenes. There were working draw-
ings, too, occasionally, and elaborately rendered
details from antiquity, but photographs never. A
lay visitor to one of the exhibitions of a decade ago
would have felt himself indeed a stranger in a
strange land. Little there was upon the exhibition
walls which appealed to his sense of beauty—still
less to his understanding.
Gradually at first, but most rapidly in the last
two or three years, the exhibition has changed in
character. It is no longer, primarily, a place where
an architect may compare his own pet drawings
with those of his contemporaries; it is an
exhibition of actual accomplishment in
architecture, and hence of vital interest to
that rapidly growing portion of the public
that loves a beautiful building. Photo-
graphs are very much in evidence to show
the layman, in his own way, what a build-
ing looks like inside, outside and in detail.
The drawings have changed in character,
too. There are still the elaborately ren-
dered details from the antique, but they
come from the architectural schools. Per-
spective drawings there are also—of build-
ings in contemplation, but the drawings
are no longer the hard, garish, ruling-pen
and violent color work of the past. To-
day they are pictures of buildings, not mere
records of fact and not reckless sallies into
.the realm of painting. A new and very
vigorous school of drawing has grown out
of the necessity for presenting to a client
a proposed building in such a way as
clearly and attractively to express its char-
acter—a school that owes its best work
to Mr. Birch Burdette Long and Mr. Jules
Guerin.
The twenty-third annual exhibition of
the Architectural League of New York,
recently held in the galleries of the Amer- chapel at
ican Fine Arts Building, was notable west point

chiefly for its wide appeal, for the number and
variety of its interests. The painter and mural
decorator had, perhaps, more than his share of the
available wall space, while one architectural prob-
lem that is connected intimately with New York—
the city house—was conspicuous in not being
represented. There was an abundance of good
W'Tork to be seen, however, and to be enjoyed and
appreciated by the architect, painter, sculptor and
layman. In all, six hundred and seventy-six
exhibits 'were hung, comprising, perhaps, eight
hundred drawings, paintings, casts, models and
photographs.
One of the most interesting features of the exhi-
bition was a problem calling for the collaboration
of an architect, a sculptor and a painter. The idea
was to have the three arts represented in a design
for an outdoor swimming pool and pavilion; the
architect presenting the design of the pavilion and
its wings, or lateral trellises, around three sides of
the pool; the sculptor contributing a model for the
source of the water; the painter’s work consisting of
sketches for the mural decoration of the open room,
or loggia. Mr. Grosvenor Atterbury, Mrs. Gertrude