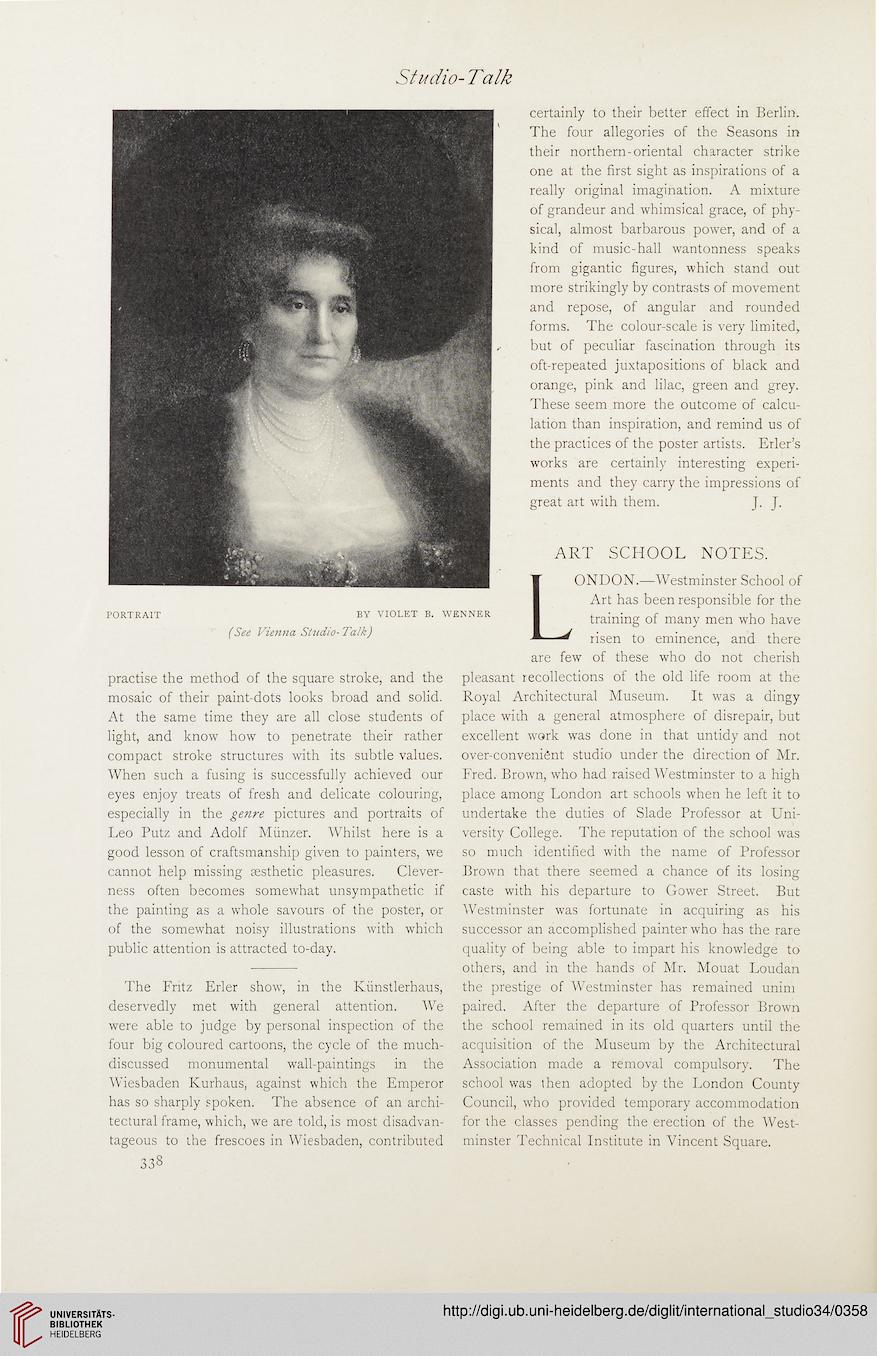 
certainly to their better effect in Berlin.
The four allegories of the Seasons in
their northern-oriental character strike
one at the first sight as inspirations of a
really original imagination. A mixture
of grandeur and whimsical grace, of phy-
sical, almost barbarous power, and of a
kind of music-hall wantonness speaks
from gigantic figures, which stand out
more strikingly by contrasts of movement
and repose, of angular and rounded
forms. The colour-scale is very limited,
but of peculiar fascination through its
oft-repeated juxtapositions of black and
orange, pink and lilac, green and grey.
These seem more the outcome of calcu-
lation than inspiration, and remind us of
the practices of the poster artists. Erler’s
works are certainly interesting experi-
ments and they carry the impressions of
great art with them. J. J.

BY VIOLET B. WENNER

practise the method of the square stroke, and the
mosaic of their paint-dots looks broad and solid.
At the same time they are all close students of
light, and know how to penetrate their rather
compact stroke structures with its subtle values.
When such a fusing is successfully achieved our
eyes enjoy treats of fresh and delicate colouring,
especially in the genre pictures and portraits of
Leo Putz and Adolf Miinzer. Whilst here is a
good lesson of craftsmanship given to painters, we
cannot help missing aesthetic pleasures. Clever-
ness often becomes somewhat unsympathetic if
the painting as a whole savours of the poster, or
of the somewhat noisy illustrations with which
public attention is attracted to-day.
The Fritz Erler show, in the Iviinstlerhaus,
deservedly met with general attention. We
were able to judge by personal inspection of the
four big coloured cartoons, the cycle of the much-
discussed monumental wall-paintings in the
Wiesbaden Kurhaus, against which the Emperor
has so sharply spoken. The absence of an archi-
tectural frame, which, we are told, is most disadvan-
tageous to the frescoes in Wiesbaden, contributed
338

ART SCHOOL NOTES.
ONDON.—Westminster School of
Art has been responsible for the
training of many men who have
risen to eminence, and there
are few of these who do not cherish
pleasant recollections of the old life room at the
Royal Architectural Museum. It was a dingy
place with a general atmosphere of disrepair, but
excellent work was done in that untidy and not
over-convenient studio under the direction of Mr.
Fred. Brown, who had raised Westminster to a high
place among London art schools when he left it to
undertake the duties of Slade Professor at Uni-
versity College. The reputation of the school was
so much identified with the name of Professor
Brown that there seemed a chance of its losing
caste with his departure to Gower Street. But
Westminster was fortunate in acquiring as his
successor an accomplished painter who has the rare
quality of being able to impart his knowledge to
others, and in the hands of Mr. Mouat Loudan
the prestige of Westminster has remained unim
paired. After the departure of Professor Brown
the school remained in its old quarters until the
acquisition of the Museum by the Architectural
Association made a removal compulsory. The
school was then adopted by the London County
Council, who provided temporary accommodation
for the classes pending the erection of the West-
minster Technical Institute in Vincent Square.