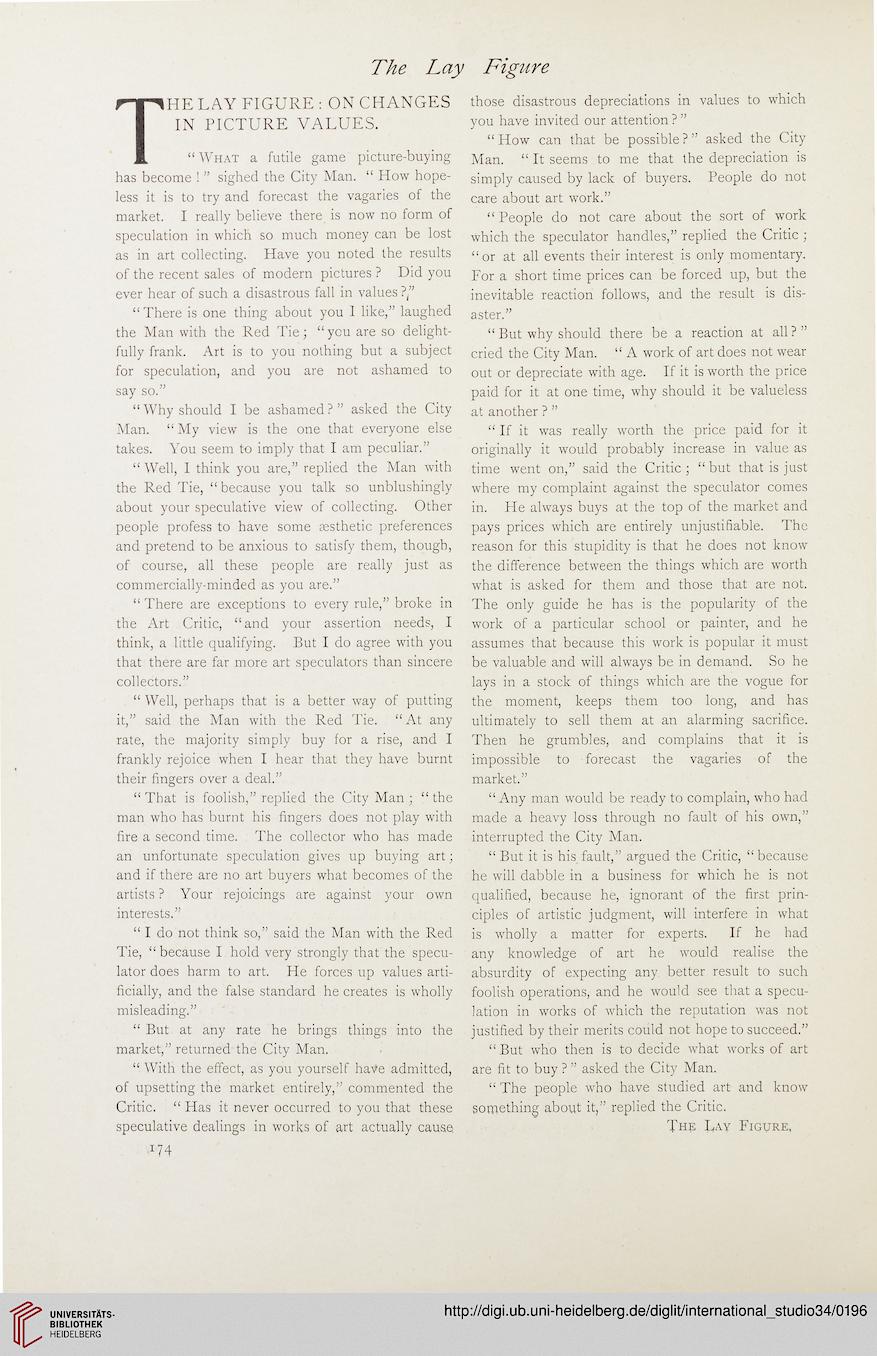 Information about OCR text
The Lay
HE LAY FIGURE : ON CHANGES
IN PICTURE VALUES.
“What a futile game picture-buying
has become ! ” sighed the City Man. “ How hope-
less it is to try and forecast the vagaries of the
market. I really believe there is now no form of
speculation in which so much money can be lost
as in art collecting. Have you noted the results
of the recent sales of modern pictures ? Did you
ever hear of such a disastrous fall in values ? ”
“ There is one thing about you I like,” laughed
the Man with the Red Tie; “you are so delight-
fully frank. Art is to you nothing but a subject
for speculation, and you are not ashamed to
say so.”
“Why should I be ashamed?” asked the City
Man. “ My view is the one that everyone else
takes. You seem to imply that I am peculiar.”
“Well, I think you are,” replied the Man with
the Red Tie, “ because you talk so unblushingly
about your speculative view of collecting. Other
people profess to have some aesthetic preferences
and pretend to be anxious to satisfy them, though,
of course, all these people are really just as
commercially-minded as you are.”
“ There are exceptions to every rule,” broke in
the Art Critic, “and your assertion needs, I
think, a little qualifying. But I do agree with you
that there are far more art speculators than sincere
collectors.”
“ Well, perhaps that is a better way of putting
it,” said the Man with the Red Tie. “At any
rate, the majority simply buy for a rise, and I
frankly rejoice when I hear that they have burnt
their fingers over a deal.”
“ That is foolish,” replied the City Man ; “ the
man who has burnt his fingers does not play with
fire a second time. The collector who has made
an unfortunate speculation gives up buying art;
and if there are no art buyers what becomes of the
artists ? Your rejoicings are against your own
interests.”
“ I do not think so,” said the Man with the Red
Tie, “ because I hold very strongly that the specu-
lator does harm to art. He forces up values arti-
ficially, and the false standard he creates is wholly
misleading.”
“ But at any rate he brings things into the
market,” returned the City Man.
“ With the effect, as you yourself have admitted,
of upsetting the market entirely,” commented the
Critic. “ Has it never occurred to you that these
speculative dealings in works of art actually cause
U4

Figure
those disastrous depreciations in values to which
you have invited our attention ? ”
“ How can that be possible ? ” asked the City
Man. “ It seems to me that the depreciation is
simply caused by lack of buyers. People do not
care about art work.”
“ People do not care about the sort of work
which the speculator handles,” replied the Critic ;
“or at all events their interest is only momentary.
For a short time prices can be forced up, but the
inevitable reaction follows, and the result is dis-
aster.”
“ But why should there be a reaction at all?”
cried the City Man. “ A work of art does not wear
out or depreciate with age. If it is worth the price
paid for it at one time, why should it be valueless
at another ? ”
“ If it was really worth the price paid for it
originally it would probably increase in value as
time went on,” said the Critic; “but that is just
where my complaint against the speculator comes
in. He always buys at the top of the market and
pays prices which are entirely unjustifiable. The
reason for this stupidity is that he does not know
the difference between the things which are worth
what is asked for them and those that are not.
The only guide he has is the popularity of the
work of a particular school or painter, and he
assumes that because this work is popular it must
be valuable and will always be in demand. So he
lays in a stock of things which are the vogue for
the moment, keeps them too long, and has
ultimately to sell them at an alarming sacrifice.
Then he grumbles, and complains that it is
impossible to forecast the vagaries of the
market.”
“Any man would be ready to complain, who had
made a heavy loss through no fault of his own,”
interrupted the City Man.
“ But it is his fault,” argued the Critic, “ because
he will dabble in a business for which he is not
qualified, because he, ignorant of the first prin-
ciples of artistic judgment, will interfere in what
is wholly a matter for experts. If he had
any knowledge of art he would realise the
absurdity of expecting any better result to such
foolish operations, and he would see that a specu-
lation in works of which the reputation was not
justified by their merits could not hope to succeed.”
“ But who then is to decide what works of art
are fit to buy ? ” asked the City Man.
“ The people who have studied art and know
something about it,” replied the Critic.
The Lay Figure,