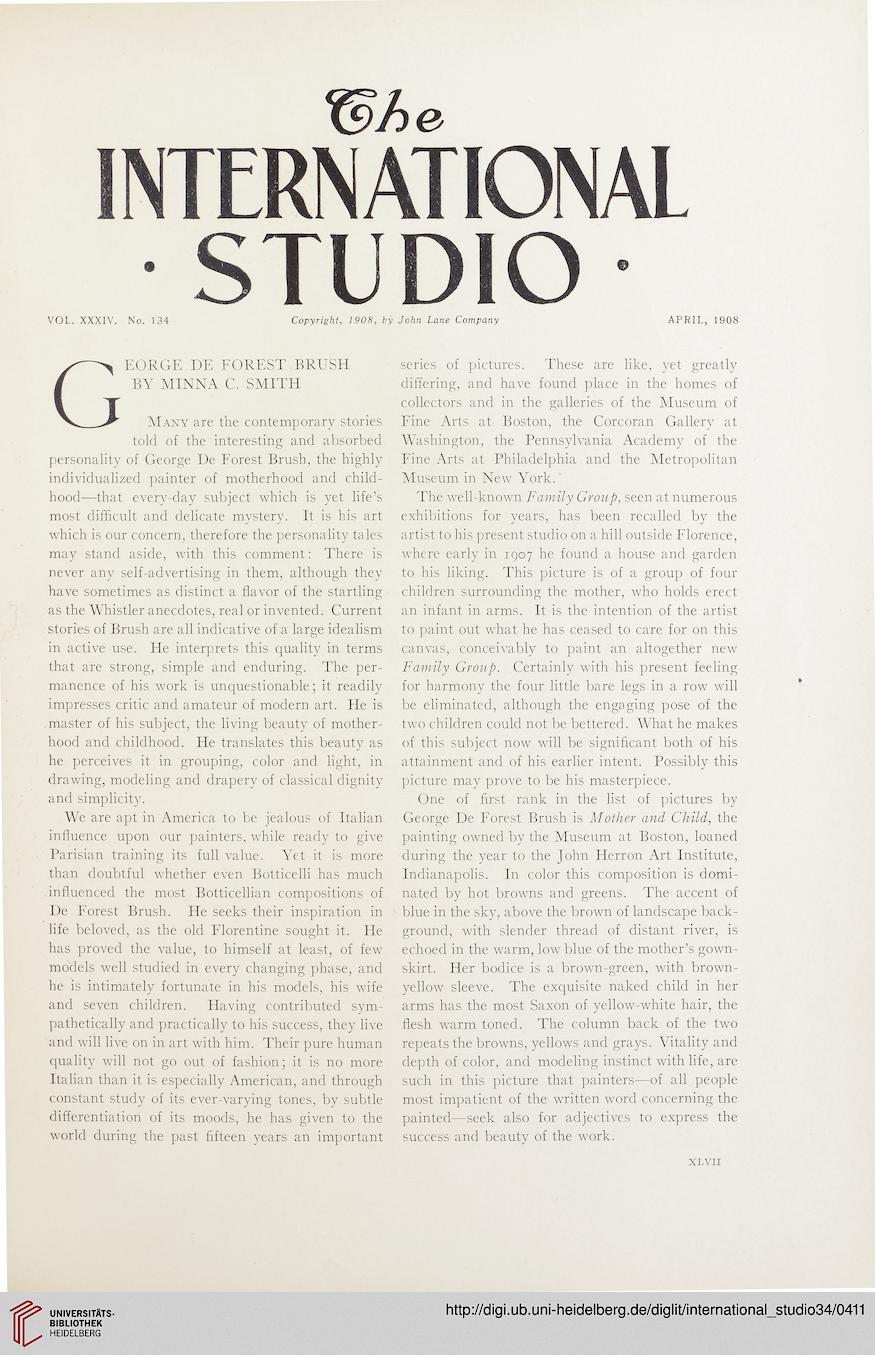 George de forest brush
BY MINNA C. SMITH
Many are the contemporary stories
told of the interesting and absorbed
personality of George De Forest Brush, the highly
individualized painter of motherhood and child-
hood—that every-day subject which is yet life’s
most difficult and delicate mystery. It is his art
which is our concern, therefore the personality tales
may stand aside, with this comment: There is
never any self-advertising in them, although they
have sometimes as distinct a flavor of the startling
as the Whistler anecdotes, real or invented. Current
stories of Brush are all indicative of a large idealism
in active use. He interprets this quality in terms
that are strong, simple and enduring. The per-
manence of his work is unquestionable; it readily
impresses critic and amateur of modern art. He is
master of his subject, the living beauty of mother-
hood and childhood. He translates this beauty as
he perceives it in grouping, color and light, in
drawing, modeling and drapery of classical dignity
and simplicity.
We are apt in America to be jealous of Italian
influence upon our painters, while ready to give
Parisian training its full value. Yet it is more
than doubtful whether even Botticelli has much
influenced the most Botticellian compositions of
De Forest Brush. He seeks their inspiration in
life beloved, as the old Florentine sought it. He
has proved the value, to himself at least, of few
models well studied in every changing phase, and
he is intimately fortunate in his models, his wife
and seven children. Having contributed sym-
pathetically and practically to his success, they live
and will live on in art with him. Their pure human
quality will not go out of fashion; it is no more
Italian than it is especially American, and through
constant study of its ever-varying tones, by subtle
differentiation of its moods, he has given to the
world during the past fifteen years an important

series of pictures. These are like, yet greatly
differing, and have found place in the homes of
collectors and in the galleries of the Museum of
Fine Arts at Boston, the Corcoran Gallery at
Washington, the Pennsylvania Academy of the
Fine Arts at Philadelphia and the Metropolitan
Museum in New York.
The well-known Family Group, seen at numerous
exhibitions for years, has been recalled by the
artist to his present studio on a hill outside Florence,
where early in igoy he found a house and garden
to his liking. This picture is of a group of four
children surrounding the mother, who holds erect
an infant in arms. It is the intention of the artist
to paint out what he has ceased to care for on this
canvas, conceivably to paint an altogether new
Family Group. Certainly with his present feeling
for harmony the four little bare legs in a row will
be eliminated, although the engaging pose of the
two children could not be bettered. What he makes
of this subject now will be significant both of his
attainment and of his earlier intent. Possibly this
picture may prove to be his masterpiece.
One of first rank in the list of pictures by
George De Forest Brush is Mother and Child, the
painting owned by the Museum at Boston, loaned
during the year to the John Herron Art Institute,
Indianapolis. In color this composition is domi-
nated by hot browns and greens. The accent of
blue in the sky, above the brown of landscape back-
ground, with slender thread of distant river, is
echoed in the warm, low blue of the mother’s gown-
skirt. Her bodice is a brown-green, with brown-
yellow sleeve. The exquisite naked child in her
arms has the most Saxon of yellow-white hair, the
flesh warm toned. The column back of the two
repeats the browns, yellows and grays. Vitality and
depth of color, and modeling instinct with life, are
such in this picture that painters—of all people
most impatient of the written word concerning the
painted—seek also for adjectives to express the
success and beauty of the work.