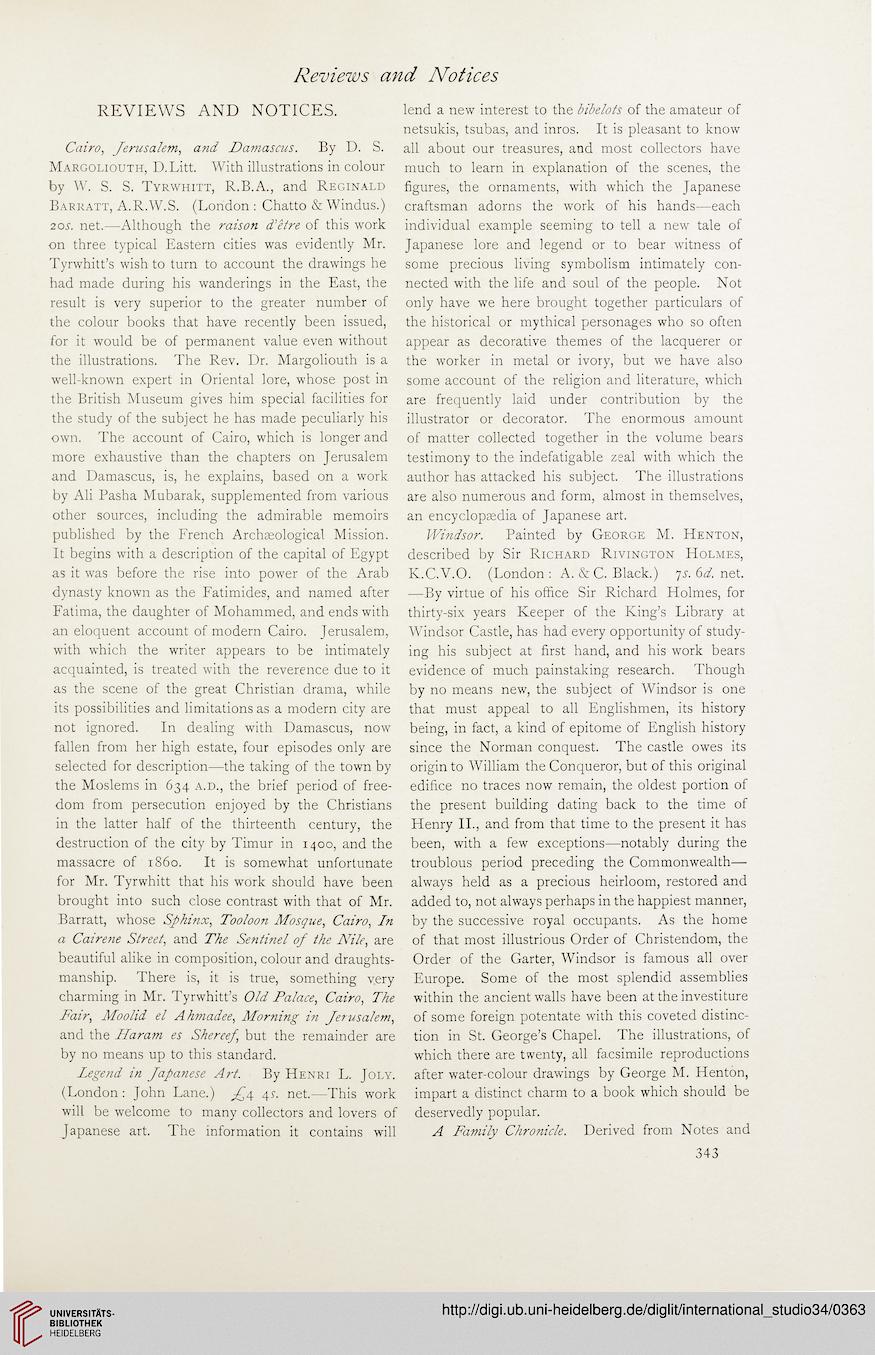 REVIEWS AND NOTICES.
Cairo, Jerusalem, and Damascus. By D. S.
Margoliouth, D.Litt. With illustrations in colour
by W. S. S. Tyrwhitt, R.B.A., and Reginald
Barratt, A.R.W.S. (London : Chatto & Windus.)
20s. net.—Although the raison d'etre of this work
on three typical Eastern cities was evidently Mr.
Tyrwhitt’s wish to turn to account the drawings he
had made during his wanderings in the East, the
result is very superior to the greater number of
the colour books that have recently been issued,
for it would be of permanent value even without
the illustrations. The Rev. Dr. Margoliouth is a
well-known expert in Oriental lore, whose post in
the British Museum gives him special facilities for
the study of the subject he has made peculiarly his
own. The account of Cairo, which is longer and
more exhaustive than the chapters on Jerusalem
and Damascus, is, he explains, based on a work
by Ali Pasha Mubarak, supplemented from various
other sources, including the admirable memoirs
published by the French Archaeological Mission.
It begins with a description of the capital of Egypt
as it was before the rise into power of the Arab
dynasty known as the Fatimides, and named after
Fatima, the daughter of Mohammed, and ends with
an eloquent account of modern Cairo. Jerusalem,
with which the writer appears to be intimately
acquainted, is treated with the reverence due to it
as the scene of the great Christian drama, while
its possibilities and limitations as a modern city are
not ignored. In dealing with Damascus, now
fallen from her high estate, four episodes only are
selected for description—the taking of the town by
the Moslems in 634 a.d., the brief period of free-
dom from persecution enjoyed by the Christians
in the latter half of the thirteenth century, the
destruction of the city by Timur in 1400, and the
massacre of i860. It is somewhat unfortunate
for Mr. Tyrwhitt that his work should have been
brought into such close contrast with that of Mr.
Barratt, whose Sphinx, Tooloon Mosque, Cairo, In
a Cairene Street, and The Sentinel of the Arile, are
beautiful alike in composition, colour and draughts-
manship. There is, it is true, something very
charming in Mr. Tyrwhitt’s Old Palace, Cairo, The
Fair, Moolid el Ahmadee, Morning in Jerusalem,
and the Haram es Shercef, but the remainder are
by no means up to this standard.
Legend in Japanese Art. By Henri L. Joly.
(London : John Lane.) £4 4s. net.—This work
will be welcome to many collectors and lovers of
Japanese art. The information it contains will

lend a new interest to the bibelots of the amateur of
netsukis, tsubas, and inros. It is pleasant to know
all about our treasures, and most collectors have
much to learn in explanation of the scenes, the
figures, the ornaments, with which the Japanese
craftsman adorns the work of his hands—each
individual example seeming to tell a new tale of
Japanese lore and legend or to bear witness of
some precious living symbolism intimately con-
nected with the life and soul of the people. Not
only have we here brought together particulars of
the historical or mythical personages who so often
appear as decorative themes of the lacquerer or
the worker in metal or ivory, but we have also
some account of the religion and literature, which
are frequently laid under contribution by the
illustrator or decorator. The enormous amount
of matter collected together in the volume bears
testimony to the indefatigable zeal with which the
author has attacked his subject. The illustrations
are also numerous and form, almost in themselves,
an encyclopaedia of Japanese art.
Windsor. Painted by George M. Henton,
described by Sir Richard Rivington Holmes,
K.C.V.O. (London: A. & C. Black.) 75. 6d. net.
—By virtue of his office Sir Richard Holmes, for
thirty-six years Keeper of the King’s Library at
Windsor Castle, has had every opportunity of study-
ing his subject at first hand, and his work bears
evidence of much painstaking research. Though
by no means new, the subject of Windsor is one
that must appeal to all Englishmen, its history
being, in fact, a kind of epitome of English history
since the Norman conquest. The castle owes its
origin to William the Conqueror, but of this original
edifice no traces now remain, the oldest portion of
the present building dating back to the time of
Henry II., and from that time to the present it has
been, with a few exceptions—notably during the
troublous period preceding the Commonwealth—
always held as a precious heirloom, restored and
added to, not always perhaps in the happiest manner,
by the successive royal occupants. As the home
of that most illustrious Order of Christendom, the
Order of the Garter, Windsor is famous all over
Europe. Some of the most splendid assemblies
within the ancient walls have been at the investiture
of some foreign potentate with this coveted distinc-
tion in St. George’s Chapel. The illustrations, of
which there are twenty, all facsimile reproductions
after water-colour drawings by George M. Henton,
impart a distinct charm to a book which should be
deservedly popular.
A Family Chronicle. Derived from Notes and
343