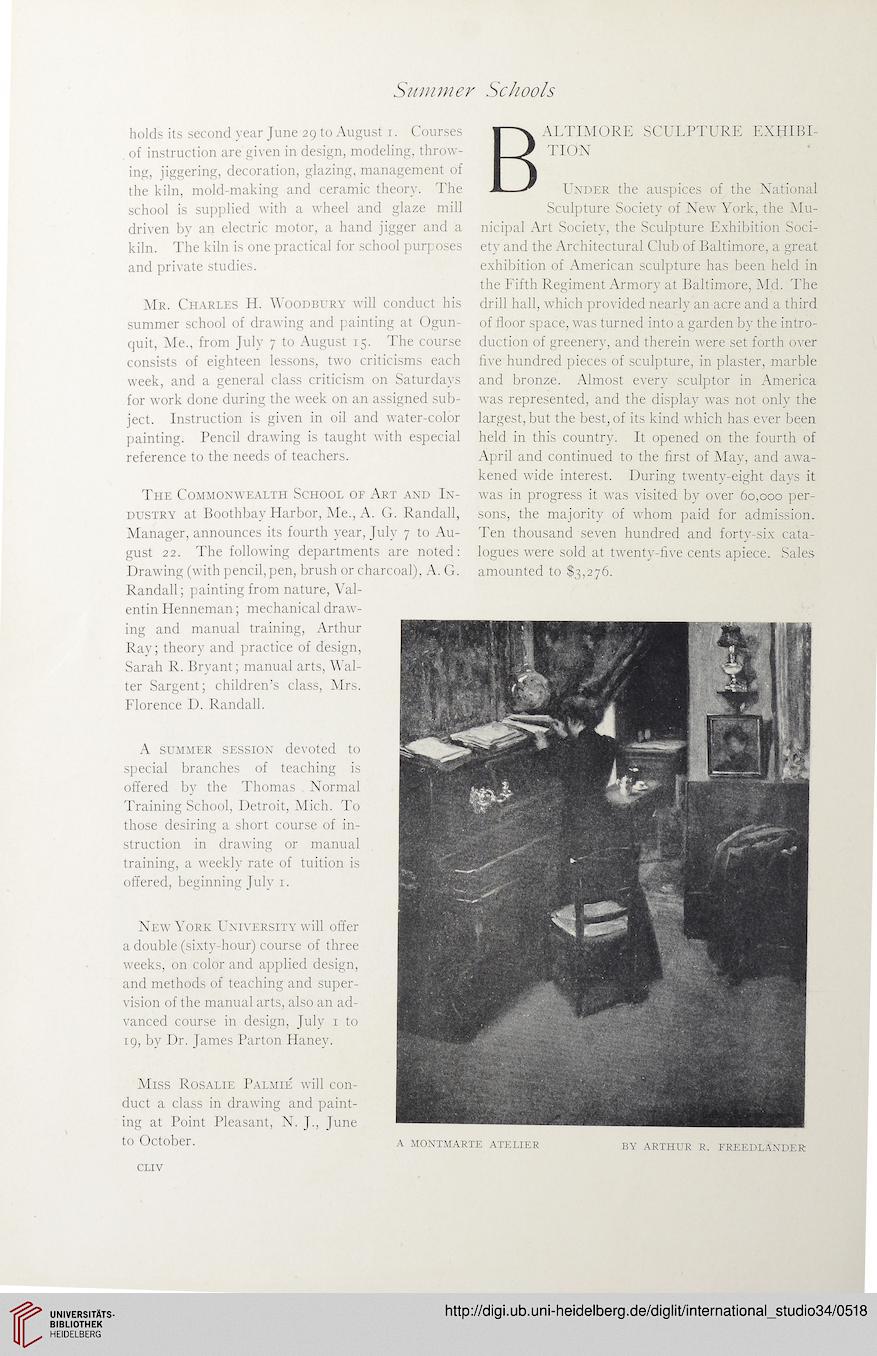 A summer session devoted to
special branches of teaching is
offered by the Thomas Normal
Training School, Detroit, Mich. To
those desiring a short course of in-
struction in drawing or manual
training, a weekly rate of tuition is
offered, beginning July i.

New York University will offer
a double (sixty-hour) course of three
weeks, on color and applied design,
and methods of teaching and super-
vision of the manual arts, also an ad-
vanced course in design, July i to
19, by Dr. James Parton Haney.


holds its second year June 29 to August 1. Courses
of instruction are given in design, modeling, throw-
ing, jiggering, decoration, glazing, management of
the kiln, mold-making and ceramic theory. The
school is supplied with a wheel and glaze mill
driven by an electric motor, a hand jigger and a
kiln. The kiln is one practical for school purposes
and private studies.

Mr. Charles H. Woodbury will conduct his
summer school of drawing and painting at Ogun-
quit, Me., from July 7 to August 15. The course
consists of eighteen lessons, two criticisms each
week, and a general class criticism on Saturdays
for work done during the week on an assigned sub-
ject. Instruction is given in oil and water-color
painting. Pencil drawing is taught with especial
reference to the needs of teachers.

Under the auspices of the National
Sculpture Society of New York, the Mu-
nicipal Art Society, the Sculpture Exhibition Soci-
ety and the Architectural Club of Baltimore, a great
exhibition of American sculpture has been held in
the Fifth Regiment Armory at Baltimore, Mel. The
drill hall, which provided nearly an acre and a third
of floor space, was turned into a garden by the intro-
duction of greenery, and therein were set forth over
five hundred pieces of sculpture, in plaster, marble
and bronze. Almost every sculptor in America
was represented, and the display was not only the
largest, but the best, of its kind which has ever been
held in this country. It opened on the fourth of
April and continued to the first of May, and awa-
kened wide interest. During twenty-eight days it
was in progress it was visited by over 60,000 per-
sons, the majority of whom paid for admission.
Ten thousand seven hundred and forty-six cata-
logues were sold at twenty-five cents apiece. Sales
amounted to $3,276.