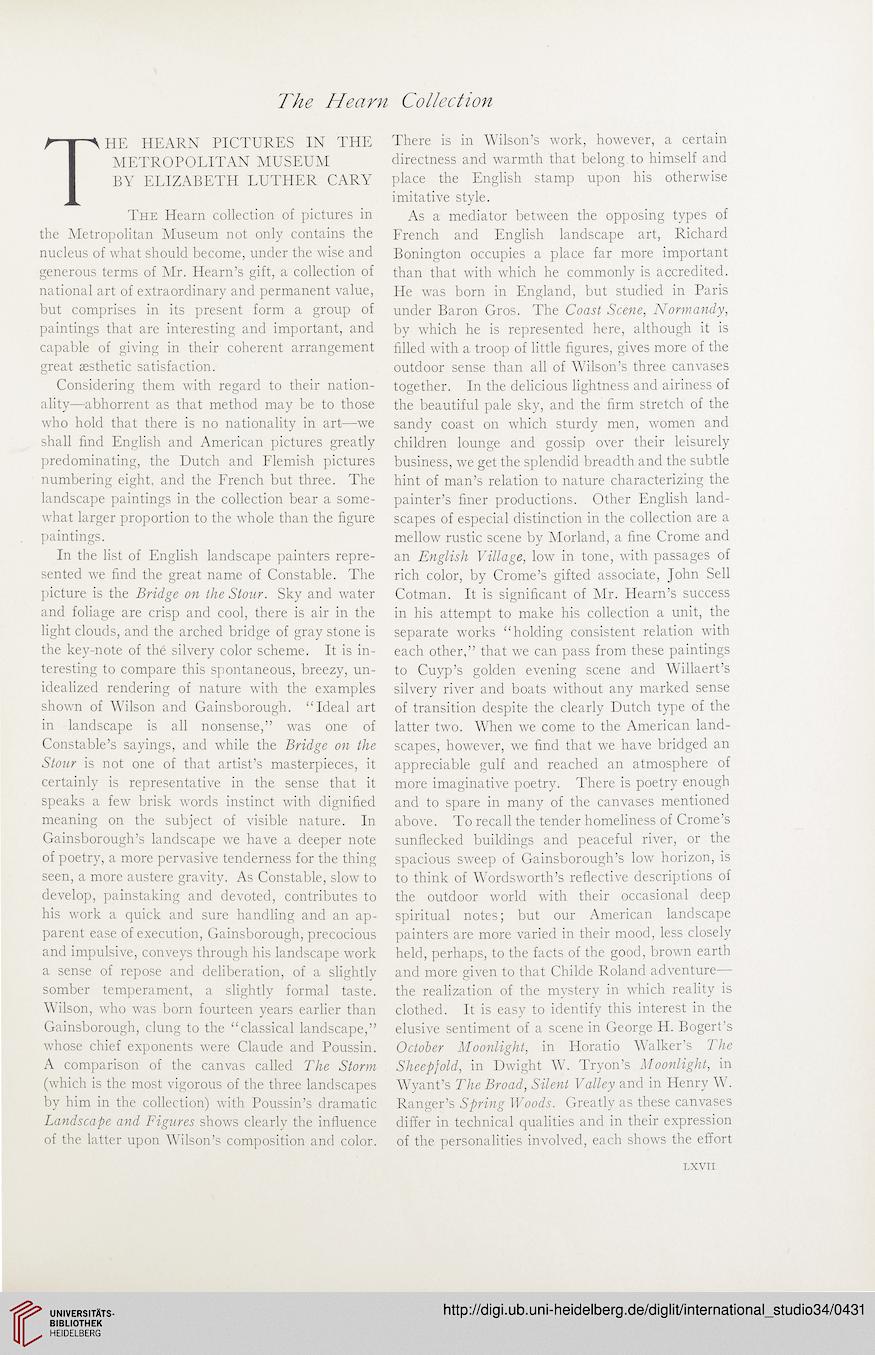 THE HEARN PICTURES IN THE
METROPOLITAN MUSEUM
BY ELIZABETH LUTHER CARY
The Hearn collection of pictures in
the Metropolitan Museum not only contains the
nucleus of what should become, under the wise and
generous terms of Mr. Hearn’s gift, a collection of
national art of extraordinary and permanent value,
but comprises in its present form a group of
paintings that are interesting and important, and
capable of giving in their coherent arrangement
great aesthetic satisfaction.
Considering them with regard to their nation-
ality—abhorrent as that method may be to those
who hold that there is no nationality in art—we
shall find English and American pictures greatly
predominating, the Dutch and Flemish pictures
numbering eight, and the French but three. The
landscape paintings in the collection bear a some-
what larger proportion to the whole than the figure
paintings.
In the list of English landscape painters repre-
sented we find the great name of Constable. The
picture is the Bridge on the Stour. Sky and water
and foliage are crisp and cool, there is air in the
light clouds, and the arched bridge of gray stone is
the key-note of the silvery color scheme. It is in-
teresting to compare this spontaneous, breezy, un-
idealized rendering of nature with the examples
shown of Wilson and Gainsborough. “Ideal art
in landscape is all nonsense,” was one of
Constable’s sayings, and while the Bridge on the
Stour is not one of that artist’s masterpieces, it
certainly is representative in the sense that it
speaks a few brisk words instinct with dignified
meaning on the subject of visible nature. In
Gainsborough’s landscape we have a deeper note
of poetry, a more pervasive tenderness for the thing
seen, a more austere gravity. As Constable, slow to
develop, painstaking and devoted, contributes to
his work a quick and sure handling and an ap-
parent ease of execution, Gainsborough, precocious
and impulsive, conveys through his landscape work
a sense of repose and deliberation, of a slightly
somber temperament, a slightly formal taste.
Wilson, who was born fourteen years earlier than
Gainsborough, clung to the “classical landscape,”
whose chief exponents were Claude and Poussin.
A comparison of the canvas called The Storm
(which is the most vigorous of the three landscapes
by him in the collection) with Poussin’s dramatic
Landscape and Figures shows clearly the influence
of the latter upon Wilson’s composition and color.

There is in Wilson’s work, however, a certain
directness and warmth that belong to himself and
place the English stamp upon his otherwise
imitative style.
As a mediator between the opposing types of
French and English landscape art, Richard
Bonington occupies a place far more important
than that with which he commonly is accredited.
He was born in England, but studied in Paris
under Baron Gros. The Coast Scene, Normandy,
by which he is represented here, although it is
filled with a troop of little figures, gives more of the
outdoor sense than all of Wilson’s three canvases
together. In the delicious lightness and airiness of
the beautiful pale sky, and the firm stretch of the
sandy coast on which sturdy men, women and
children lounge and gossip over their leisurely
business, we get the splendid breadth and the subtle
hint of man’s relation to nature characterizing the
painter’s finer productions. Other English land-
scapes of especial distinction in the collection are a
mellow rustic scene by Morland, a fine Crome and
an English Village, low in tone, with passages of
rich color, by Crome’s gifted associate, John Sell
Cotman. It is significant of Mr. Hearn’s success
in his attempt to make his collection a unit, the
separate works “holding consistent relation with
each other,” that we can pass from these paintings
to Cuyp’s golden evening scene and Willaert’s
silvery river and boats without any marked sense
of transition despite the clearly Dutch type of the
latter two. When we come to the American land-
scapes, however, we find that we have bridged an
appreciable gulf and reached an atmosphere of
more imaginative poetry. There is poetry enough
and to spare in many of the canvases mentioned
above. To recall the tender homeliness of Crome’s
sunflecked buildings and peaceful river, or the
spacious sweep of Gainsborough’s low horizon, is
to think of Wordsworth’s reflective descriptions of
the outdoor world with their occasional deep
spiritual notes; but our American landscape
painters are more varied in their mood, less closely
held, perhaps, to the facts of the good, brown earth
and more given to that Childe Roland adventure—
the realization of the mystery in which reality is
clothed. It is easy to identify this interest in the
elusive sentiment of a scene in George H. Bogert’s
October Moonlight, in Horatio Walker’s The
Sheepfold, in Dwight W. Tryon’s Moonlight, in
AVyant’s The Broad, Silent Valley and in Henry W.
Ranger’s Spring Woods. Greatly as these canvases
differ in technical qualities and in their expression
of the personalities involved, each shows the effort