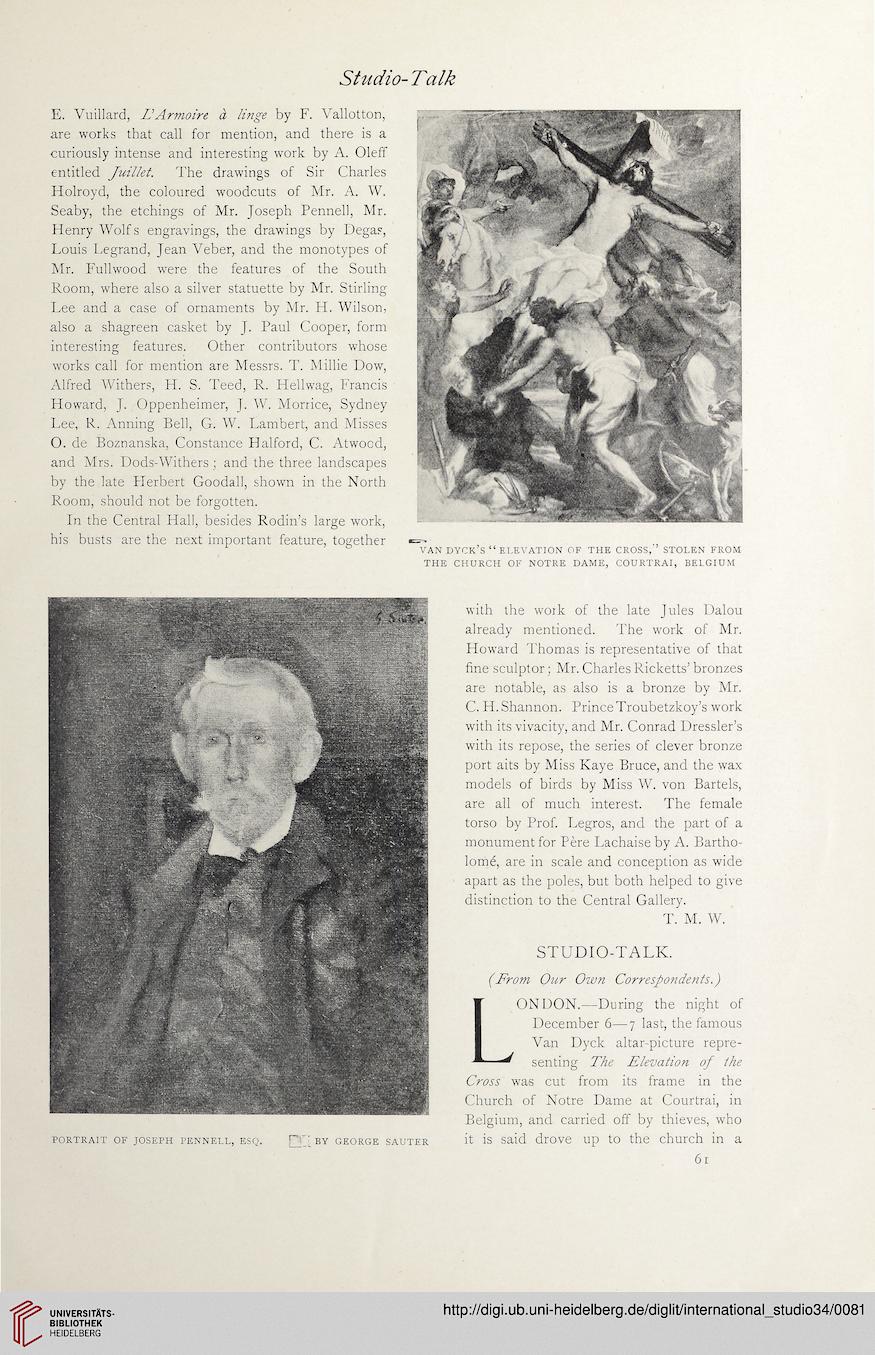 E. Vuillard, UArmoire a linge by F. Vallotton,
are works that call for mention, and there is a
curiously intense and interesting work by A. Oleff
entitled Juillet. The drawings of Sir Charles
Holroyd, the coloured woodcuts of Mr. A. W.
Seaby, the etchings of Mr. Joseph Pennell, Mr.
Henry Wolf s engravings, the drawings by Degas,
Louis Legrand, Jean Veber, and the monotypes of
Mr. Fullwood were the features of the South
Room, where also a silver statuette by Mr. Stirling
Lee and a case of ornaments by Mr. H. Wilson,
also a shagreen casket by J. Paul Cooper, form
interesting features. Other contributors whose
works call for mention are Messrs. T. Millie Dow,
Alfred Withers, H. S. Teed, R. Hellwag, Francis
Howard, J. Oppenheimer, J. W. Morrice, Sydney
Lee, R. Anning Bell, G. W. Lambert, and Misses
O. de Boznanska, Constance Halford, C. Atwood,
and Mrs. Dods-Withers; and the three landscapes
by the late Herbert Goodall, shown in the North
Room, should not be forgotten.
In the Central Hall, besides Rodin’s large work,
his busts are the next important feature, together


van dyck’s “ elevation of the cross,” stolen from
THE CHURCH OF NOTRE DAME, COURTRAI, BELGIUM

with the woik of the late Jules Dalou
already mentioned. The work of Mr.
Howard Thomas is representative of that
fine sculptor ; Mr. Charles Ricketts’bronzes
are notable, as also is a bronze by Mr.
C. H. Shannon. Prince Troubetzkoy’s work
with its vivacity, and Mr. Conrad Dressler’s
with its repose, the series of clever bronze
port aits by Miss Kaye Bruce, and the wax
models of birds by Miss W. von Bartels,
are all of much interest. The female
torso by Prof. Legros, and the part of a
monument for Pere Lachaise by A. Bartho-
lome, are in scale and conception as wide
apart as the poles, but both helped to give
distinction to the Central Gallery.
T. M. W.
STUDIO-TALK.

LONDON.—During the night of
December 6—7 last, the famous
Van Dyck altar-picture repre-
senting The Elevation of the
Cross was cut from its frame in the
Church of Notre Dame at Courtrai, in
Belgium, and carried off by thieves, who
it is said drove up to the church in a
6 r